They should be almost as good tonight. And temps warm enough for an RG showing.
ONE
Posted by nocar at 10:18 AM 5 comments: Links to this post

Its bicycle season. Conditions are so good that RG made it out last Tuesday. And damn near every man, woman, and child in El Dorado County got out on a bike last Friday. 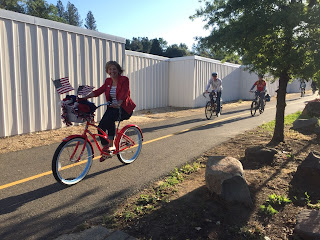 For a minute, Buttons and his crew had the biggest undertaking. But they were run off the road by a pack taking the long way to South Lake Tahoe.

The premier event of the weekend went down on Sunday, when FT3 kicked off Long Ride season with a return to Rock Creek.


It rained again last night. So trails will be perfect again tonight. And rumors are swirling that two (2) riders may be coming off of the injured roster and back onto the dirt.

The trails got reset to perfect last night, sunset is sometime after 8, balmy, and they still serve tacos at the Knot.  Can't get any better.


While some may be unaware, we have a special kinship with some brother MTBers from down the hill. Those riders, known as "The Folsom Breakouts" ride on Tuesdays in the flat lands, weaving together what trails they can for a worthy night time MTB effort. Over the years, there has been talk of joining forces in one way or another, maybe we visit them when Pollywood is under snow, or they come join us for a romp in our neck of the woods.

Well the day has come, and this evening, at least one, and possibly two breakouts will join the ranks of FT3. 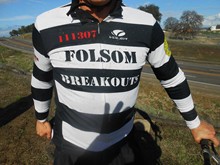 So join me in welcoming these breakouts as they break from their own ranks to join ours. Fear not, these riders are no strangers to Pollywood, the Strava boards boast some familiar names. It is actually quite surprising the similarities between the two separate but equal groups, take a gander at their photo log of a recent adventure on the XP trail:

Indeed, they make waves in the LRP realm, with one of the more vocal breakout leaders recently encouraging participation in the Centennial Ride from Sacramento to Lake Tahoe, that ride which was featured in the Adventure Sports Journal:

What shall we call them?


Every so often a rider shows up to FT3 with a new rig. A long time ago it was typically the rider formerly known as "Rock God," now known as "Retired Guy." Other times it was XTeric, and at times it would be Councilman, but he no longer rides so...We all look in awe and jealousy as said rider unloads the rig and prepares their kit for shredding. Sometimes, it is tough to keep up with the "FT3er's."

One rider who has not brought a new ride to the taco table for some time is the veteran "No Handle." He hasn't mounted a new MTB since the youthful members of Team 1 crushed the Coolest 24 Hour race  nearly a decade ago.

Good news is, the bike he has been riding was one of the top ten products of 2010 (according to 29 inches magazine). 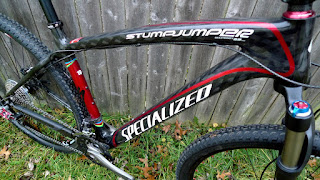 Word on the street is that he is shopping for the latest and greatest and is interested in 'copping a feel' of a few of the finer rigs present in the FT3 quivers. So bring out your best, let him put them to the test, 'cause tonight's riding conditions are sure to be the best!


(Post edited by NoHandle - Cappy your mention of 24 hr race made me nostalgic.  While I could not find proof that I actually did not have my Stumpy back during Team 1, this pic from the 2nd race of Dear RL in the mud pit with Ghost is priceless.
Great write up.