I hoped to post a Ride Report last night, but I ended up going mountain biking with an engineer I work with. 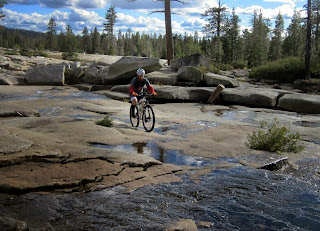 First, let’s all observe a moment of silence for our beloved comrades who were unable to participate in the first sweet trails ride after a long summer of dust.

I think the Mosquito Lot was bypassed by all participants. Lucky for me the party car stopped by Camino. A bevy of unfamiliar faces were kitted up and ready when we reached the Knott Lott. From back channel news sources, I identified the owner of the extra-large frame and the cross rider, but I couldn’t place the third. After nearly everyone declined to be RideLeader, Newb assumed the role. He led us out the back, then kept rolling South on Sly Park Road past the MET intersection. So, we called him back, explaining the absolute necessity of riding the Qualifier. He started to claim his prerogative as RideLeader, but realized that he did not have the political clout to break one of the few institutionalized rules of FT3.

We headed up the Qualifier and our newest addition quickly proved his competence. Over to Powerline, where even the ninth rider didn't taste dust. Cutting back to the bottom of the Qualifier,  the last two riders didn’t appear. Back riding, we found the crosser upside down –pinch flat.

After a failed patching attempt, a 26 inch tube was stretched onto the rim and we were back in action. For a moment. Then there was an issue with a light coming loose.

We hopped back on our bikes heading for the lake when a certain rider had chain malfunctions, requiring an exasperated Newb to perform a trailside derailleur adjustment.

Not everyone could make it to the taco table. Those who stuck around were glad they did.

Posted by nocar at 4:22 PM 2 comments: Links to this post

Folsom Cyclebration Cyclocross Race went down this weekend, yours truly and Gen 2 took honors. I was bested by my Gen 2 offspring as he went clear for first, I had to settle for second in my class. Nonetheless, I have now visited the Men's 35+ A podium twice, which I will enjoy while it lasts, because soon enough the Taco Spawn will make his entry on the scene. 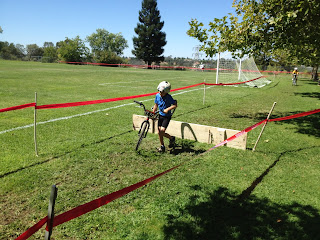 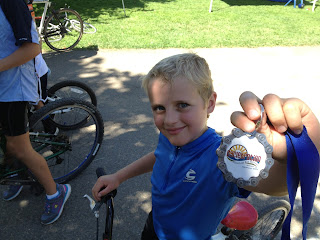 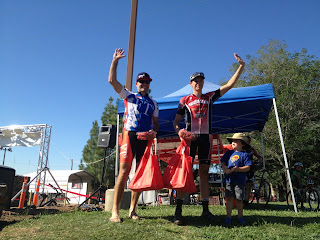 The hot day made for what can be best known as 'non-traditional' California Cyclocross. It was about 96 degrees at the 2:30 start time. It took a fare bit of HTFU just to push through the entire 60 minutes, fortunately my cousin, who was present to watch, brought his hat to remind me each lap. The course was super fun, featuring a mix of grass, sand, pavement and rocky technical sections. My strategy was simply to drill 'the hill' each lap and then take down the technical section with vigor, get through the rest of the course and do it all over again, and again, and again. Twelve laps were conquered over the 60 minute period. All together a good day of cross, it would have been nice to be a little closer to the winner, but I am happy with a podium finish nonetheless.

Cappy threatened to stop driving carpool if he keeps losing out on ride time. We discussed solutions to the chronically late rollout, and came back to the idea of a "pre-ride". Basically, a standard loop could be ridden clockwise by the early departers and counterclockwise by the later.

Our DRL took the traditional lead and re-qualified himself. Taking up the caboose position, Safety First! hung on to the pack. He was just back from NYC where he had been partying in the clubs until dawn. We dropped chopping block turned left at the flume and climbed asphalt back to Park Creek Rd. Rather than dropping the all too familiar power line trail, Taco Spawn pointed out a new route called "nap time" installed by the creator of skid trail. All agreed that this will be the trail to hit once the rain comes. For now it is loose and fun with plenty of big features. After climbing little used double track we dropped the lower section of the powerline, to boy scout camp trails to a lake CW. We swam at the boat launch and rolled back for tacos.

Taco Spawn shared some of the family secrets for making taco meat, a task he has inherited. As the evening wound to a close, we got to see the difference between FT3ers who are paying customers and those who are members of the royal family. B and I watched enviously as Mr. Spawn stepped behind the bar and poured himself five fingers of rye. The fun didn't stop there. B and I rode to the Pine Lodge. As usual the Pine Lodgers warmly welcomed our arrival on bikes. Chickenbake joined us for the FT3 after party.  Turns out that besides rocking the kitchen she can also rock the pool hall. B was in top form for our games of Cutthroat, and I got a few lucky shots, but Chickenbake clearly ruled the table.  They kicked us out some time after two and we enjoyed a relaxing roll home in the fresh night air.

[Following commentary by added by Cappy] They are approximately $30 and I can get them ordered if you want one, let me know. There are other colors and styles available too, but I wanted to keep it real with FT3 colors. Most of them are pro fit so I will need your cap size. Here is a photo documentary of the process, including the first rendition with ghetto lettering that didn't work out. 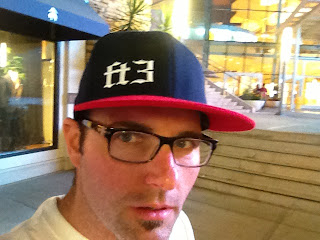 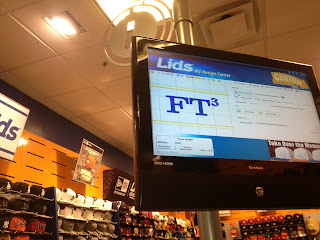 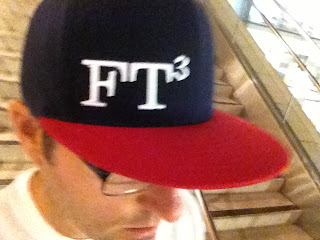 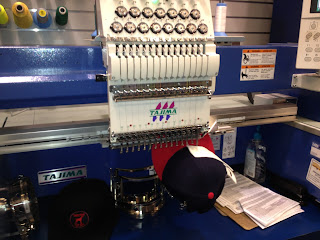 Posted by nocar at 5:19 PM 4 comments: Links to this post


And who's going to church 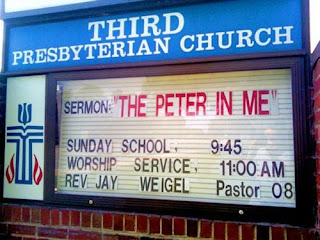 ONE! Definitely riding up. Leaving Camino by 5:00. 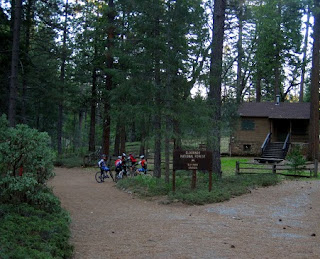