The Hell Hole area has long been considered ripe for an LRP. One unknown section stands between connecting Van Vleck to the Eldicott Bridge -the McKinstry Trail and the Hell Hole trail. I figured I could knock those out in a casual morning. Guessing that I may have Cappied the time estimate a bit, Mrs. Nocar cooked up a plan where we would drop a shuttle car and then camp out near the trailhead. This also allowed us to reconnoiter the start of the trail, which appeared scratchy, but present.

I started riding at 7am. The trail immediately disappeared. Besides hiking, I ended up brush crashing, rock climbing, and scree scrambling. When I did finally get back on a trail, about halfway along the Hell Hole Trail, it was so covered by downed trees that I never rode more than a quarter mile at a time. And often I couldn't even make a hundred feet. Miraculously, seven hours later, I reached the dam, and then got to enjoy the sweet Hunter Trail all the way back down to the target car. 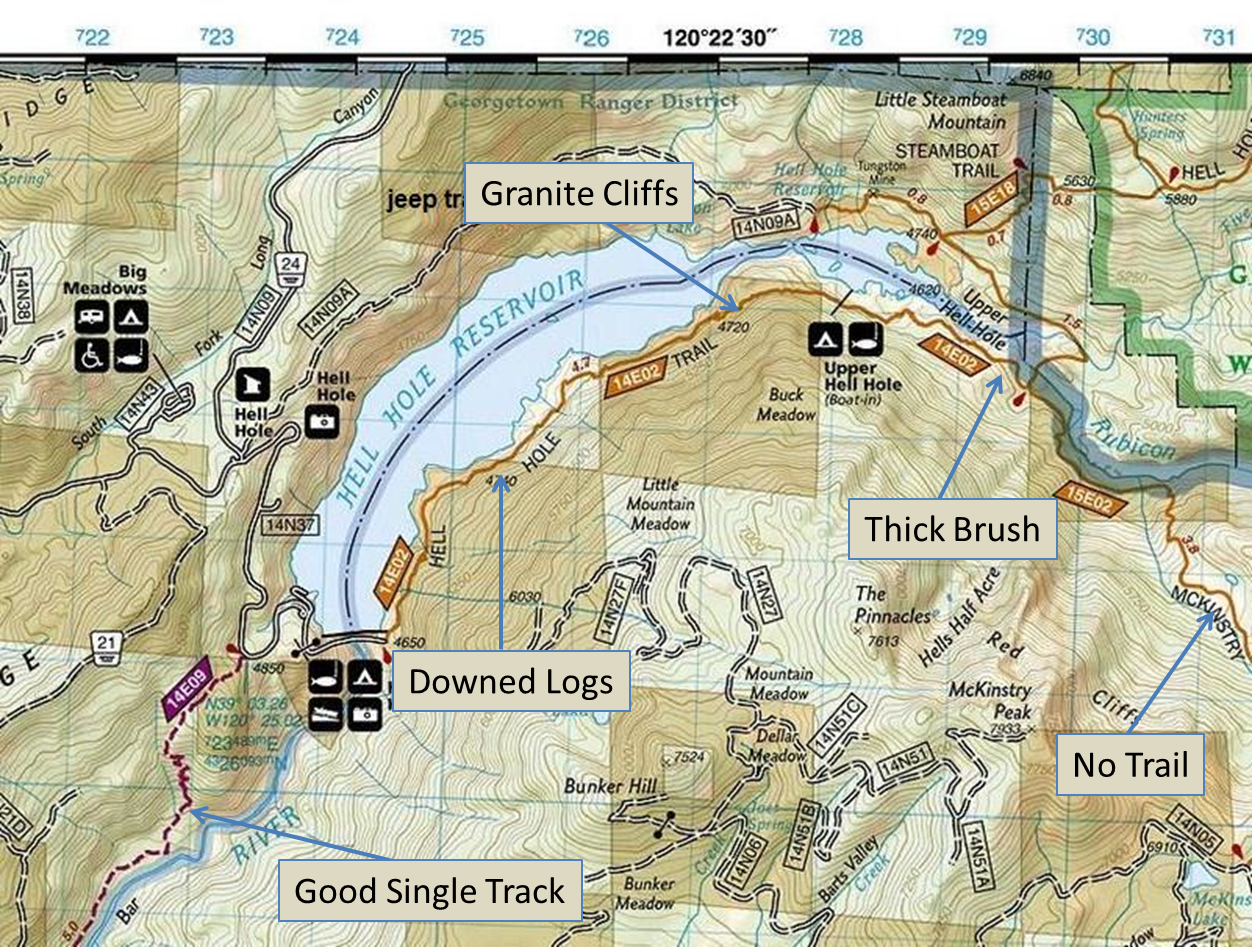 For any hearty souls, this Monday, I plan to ride a road bike shuttled mountain bike ride that my wife doesn't want me to tackle alone. Too many details to list, but a recent mtbr thread indicates that the majority of the singletrack is clear. Suffice to say, the ride is to Hell (Hole) and back. Anyone?
Posted by nocar at 9:16 PM 2 comments: Links to this post

Is it the fear of rain?

I like to fill in the role of practical poster, leaving the role of creative posts to those are are creative. The most important thing about a post, is that it happens. So, today is Tuesday or at least it was when I woke up. Not only that but there is a chance of rain in the air. The soil and traction could not be any better than it was last week, but I welcome the dust dampening rain. We've not really had dust to speak of yet, but you know it is just around the corner. We were 12 last week, and 2 weeks prior to that. What will the count be tonight? One
Posted by NoTacoHandle at 12:45 PM 9 comments: Links to this post

From Ritalin to Relativity 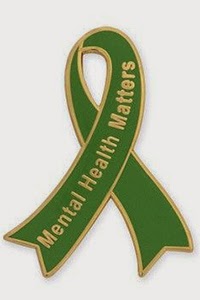 May is Mental Health Awareness month, and if you weren't already privy, an important time to reflect on why we do what we do on bikes. One could argue we ride for sanity, improving cardiovascular fitness, lowering stress levels, etc. Others might argue we have to BE insane to navigate twisted ribbons of dirt and rock under the cover of night. So which is it, are we saving our psyches or indulging our "crazy"? 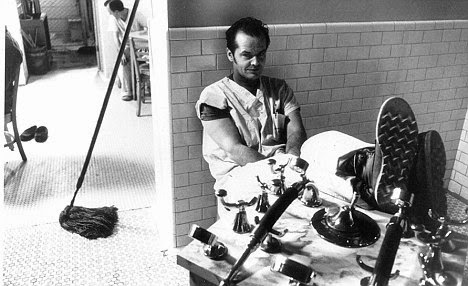 This, of course, is a subjective inquiry, and one which touches upon the delicate balance inherent in a cycling life. Anyone who has purposely plunged their DTI to get their cycling "fix" can attest to the resulting spousal or other relationship issues, the rising stress levels, and the need to seek another ride to counter the last, and on the cycle (pun intended) goes. 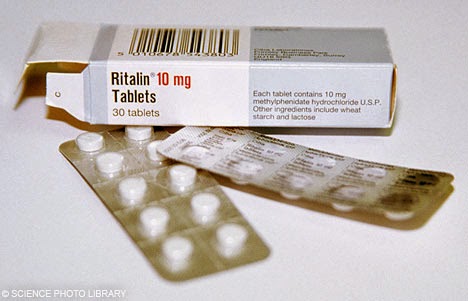 Meanwhile, as we ponder our own place in the pantheon of pedaling pathology, the good folks doing research on the benefits of cycling have added some compelling evidence. According to one source*, cycling can mitigate the effects of ADHD, Parkinsons, and even allowed Einstein to "reflect usefully on emotional troubles". In fact, one author stated riding a bike was like "taking a little bit of Prozac and a little bit of Ritalin". Cocktail, anyone?

So, there we have it. Cycling is scientifically proven to act like a drug, and if you do enough of it, you may find yourself not only on the path to mental wellbeing, but perhaps pondering relativity, as Einstein did aboard his trusty steed. 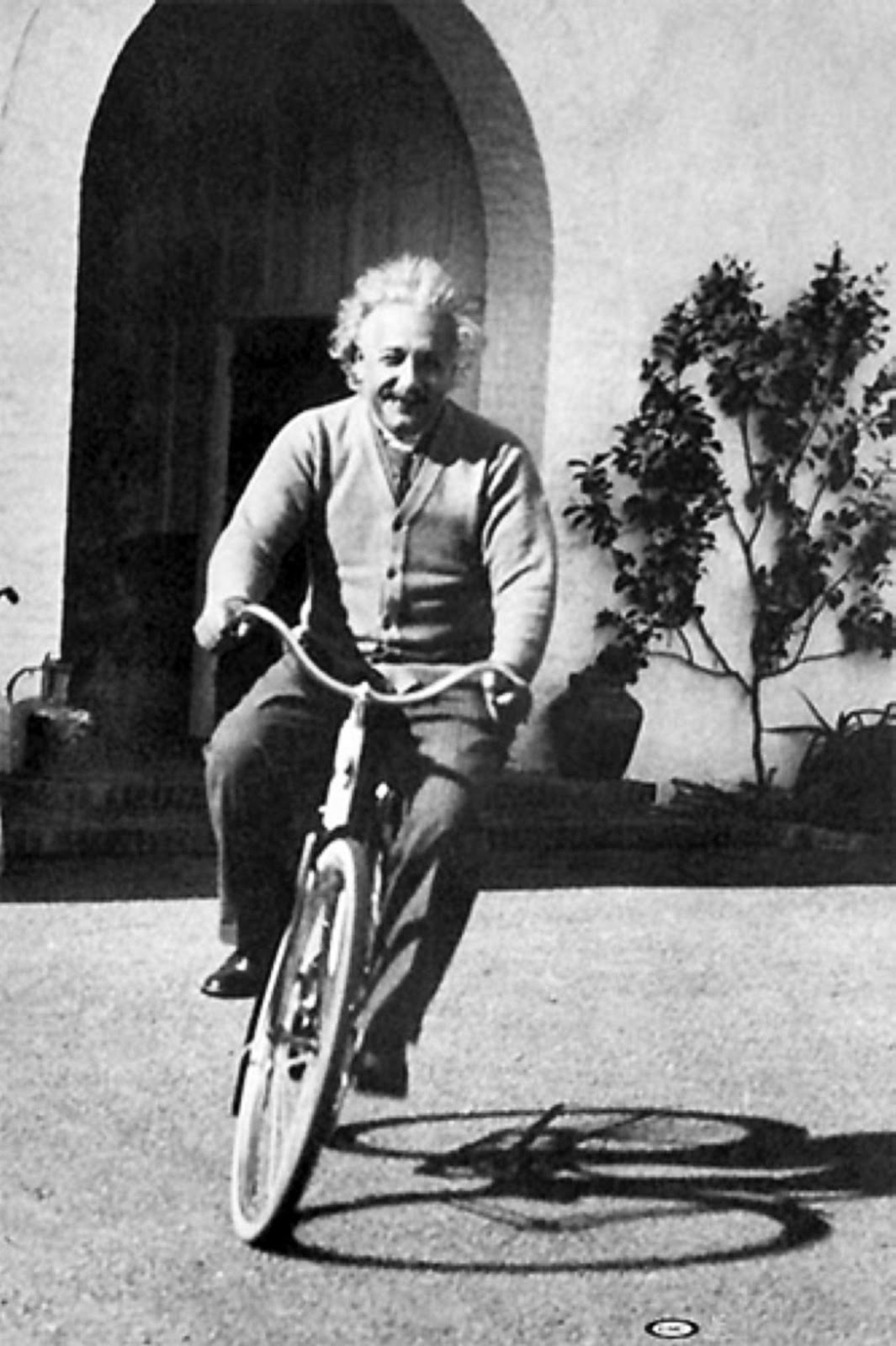 Posted by Counselman at 10:12 PM 10 comments: Links to this post

Forget everything you thought you knew.

Last Tuesday's gathering was no snafu, just a pleasant evening full of surprises and deviations from the norm. If you were unable to join us, allow me to provide some pertinent details. (As this is only one rider's perspective on the night's unfolding events, take it with a grain of salt - and a swig of something tasty, if you like . . .)

As pc was busy earning DTI points walking with the family on Placerville Drive dangerously late Tuesday afternoon, he ran into RG on a skinny tire excursion. Coincidence? Whether auspicious or portentous, only time would tell.

Driving up to Pollywood at a reasonable rate of speed, but as fast as his pickup would safely allow, pc attempted to make contact with three different riders on his cell phone to alert them of his extreme tardiness. Cappy's phone was already stowed. B and Newb, ironically, answered, but neither - as it turned out - were able to make the ride. Communication unmade, pc continued down Sly Park Road with faith that fate would make the right decision. He pulled into the Knot lot's back entrance just as the riders were heading out the back door! 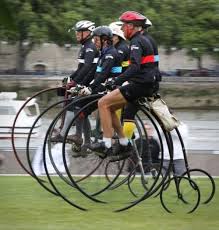 Undoubtedly, the eight riders were momentarily peeved at this unexpected delay, but they agreed amiably to wait another three minutes to let the new addition gear up. In his haste, pc had left his kit on the kitchen table. But shoes, helmet, bike and even lights made it to the trail head, so with corduroys tightly pegged mid-calf, he joined the crew. Pumped with adrenaline and serendipity from the near-miss, said rider - amid hipster jokes - flagrantly violated protocol and charged down the back door trail ahead of Lars and the pack. Have he no decency?

Our Dear Ride Leader selected a lovely loop around the sparkling lake shore, and all delighted in both the fun and beauty of the route. That's where things started to get fuzzy. Eventually, the group ended up emerging into civilization at the end of a cul-de-sac, climbing up the formidable Cubic Zirconia Drive, traversing over to Monarch's lumber Path, and spilling out onto the middle school's field before making a circuit of the adjacent singletrack loop. Cyclocross, anyone? Mildly disoriented but oddly titillated by the singular route choice, the nine climbed more pavement before ascending the dirt trail leading to . . . ride leader's lair!

All graciously accepted the offer of shots before scurrying off into the darkness, wary of lingering longer than the customary 180 seconds allotted each stop. Lars, naturally, retired for the evening. Stryker peeled off.


The seven felt relief at the return of dirt between their knobs. Powerline was a hoot. A bit more singletrack was devoured by the hungry pack, but they didn't delay in getting back for actual  mastic-able sustenance. Some joker arranged the tables into square just to shake things up. Two riders, apparently unaware of the day of the week, ordered fish in their tacos. Two baskets of fresh chips appeared, along with bowlfuls of salsa left over from the weekend's hedonism. Apparently, there was some extra carnitas, too, as each basket contained a special package of juicy pork filling.

The women of the establishment, fed up with weird-o's and laughable gratuities, turned off the lights early so as to not attract any more moths to the knot, adding to the feeling of exclusivity in the room.

Reflecting on the unusual evening and conjuring the spirits of those unable to attend the festivities, satisfaction set into the group. Auspicious, indeed . . . 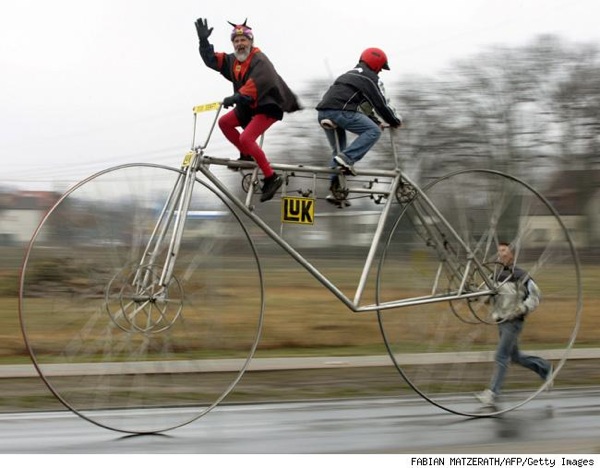 Posted by partial credit at 5:03 PM 4 comments: Links to this post

The new acronym in cycle planning is MAMIL. Middle Aged Men In Lycra. I would like to propose a gathering of all MAMIL's for the weekly ritual that is FT3. If you, unlike me, were one of the 12 strong last week who couldn't produce a ride report, then you should show up this evening and pay your penance with a pack or two of Pre-Br's. After all, it is SSFT3. And, because last weeks ride was kicked off with a confession and prayer of the fat tire.

FT3, like cycle planning, has developed some of it's own language. Take "gang texting" for instance. Surely no other group has thought of something so clever.

And, speaking of Acronym's - I heard there is an LRP planned for this Saturday, let's get to the bottom of the details.