Waist Deep In the Big Muddy 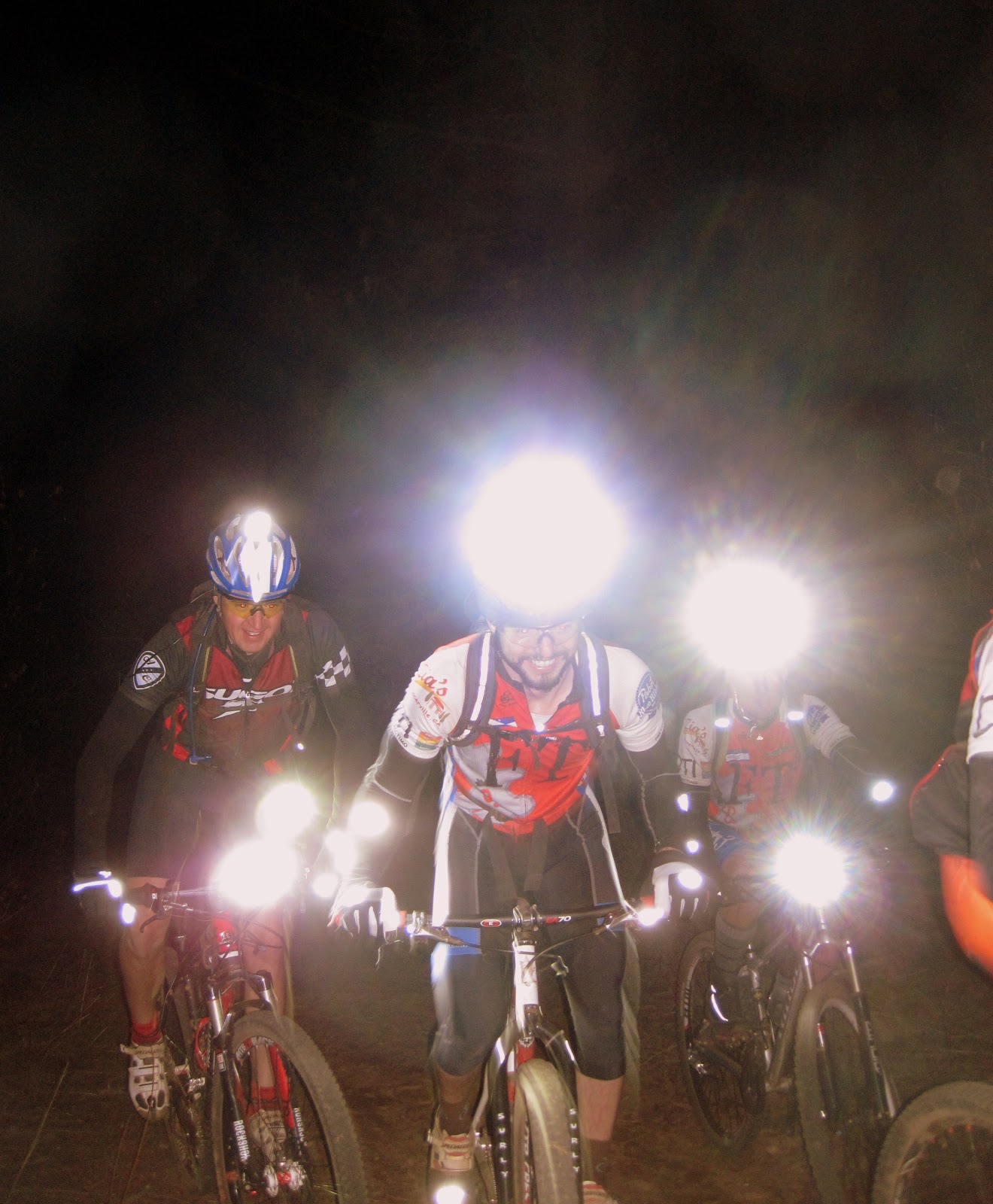 A team of eight readied in the Knot Lot. Spawn beat the rush to the refrigerator, and send Credit and I back to the Lot to wave the flag.

Unknown Local accepted RideLeader, and conducted a dense tour of the trails below Qualifier plus an extended mars roving remix. We would have ridden around the entire lake's low water line, but we got cliffed out. Hollered across the lake to a pair of night riding spotters.

Teacher of the Year award went to Credit. He taught me how to do something that I previously thought myself capable: After changing a tube, I struggled to remount the last bit of tire onto the rim. He plucked the wheel from me, shucked half the tire from the rim, gripped the wheel with both hands close, tucked his thumbs between the bead and the rim, and pulled the bead taught all the way around the rim in a swift gesture with an effortless pop. "I can't wait to get another flat so i can try that!" I exclaimed. Bless my lucky stars, about seven minutes later my tire was flat. At this point I didn't know who was going to start crying first me or Newb. Fortunately RideLeader defused the situation by taking the pack on a short loop. They returned just as I was ready, having successfully popped a tire onto the rim as shown.

The tacos were an indulgent two fingers of meat deep in good shells along with baskets of chips and mango salsa and Jamaican Pain. The bitches called me nocar.

Posted by chicken wing at 7:44 PM 2 comments: Links to this post

Chickens don't have collar bones. The equivalent bones have fused with the interclavicle to become the wishbone. A structure ritualistically broken for good luck. It is also good luck to break the collar bone. Evolutionary biologists have theorized that the clavicle is designed to fail. Crooked as a dive bar cue stick, the clavicle breaks rather than subject the neck vertabrae to potentially life threatening forces. No surprise, then, that the clavicle is the most commonly broken bone. Especially among hedonistic bicyclists.

Fortunately, with the help of a good surgeon, they also heal quickly. Assuming no one plans to callout a Monday ride
ONE!

The Taco Gossip:
I've been around the Taco Table a bit, and have heard some he said, spotter said, so here's the report.

FT3NYE
Remember how it used to be 2013? FT3 hammered out a ride. I missed it. Word is, RG took a hard bail and then jettisoned. The big news is that Mrs. Chickenwing and Mrs. Noobie joined the Taco Table. For the holiday, Mother served nachos, and for FT3, Chickenbake served chickenbake.

The next week
I got to the Knott just in time to see half the group arrive. Shortly after tacos started spouting from the kitchenhole, the second group arrived. Word is that RideLeader Taco Spawn rushed though a Park Creek road intersection (I am guessing that this was the intersection were Park Creek, Hazel, and Plum ridge all come together and there are more roads than arms on an octopus), and half the group had fallen behind while Noobie picked a pea from his saddle. Cel phone communication allowed the two groups to finish the evening on independent routes. Partial Credit offered himself as whipping boy, since he was the last to pass the intersection before the gap.

The week after that
ODRL made a cameo, and kept an orderly pack. Until Buttons went missing. They backtracked to find him exhibiting the dreaded "Rocking God" syndrome. The poor lad wrecked hard enough on the fast, rutted descent of Redneck to merit a shuttle back to the Knott. Has anyone else wrecked on that stretch? I see at least three hands.

Today
Cappy lead an assault on Rock Creek Road to Georgetown and Kelsey. As per Cappy standard the ride was at least 50% longer than his stated itinerary.

Tuesday the 21st
Soil may have a patina of dust, but traction will be stellar.
I'll hoist the flag.
Posted by chicken wing at 8:04 PM 15 comments: Links to this post

I am meeting Green Fro at 9:00am Sunday at his house way up in the hills of Kelsey on Sunday morning to do an Old Caz "training" ride. We have both registered for the Grasshopper Adventure series ride that we did two years ago, it was super awesome. Very fast, very hard, mostly dirt and mostly fun! Cross Bike is highly recommended for the Old Caz, which is on Saturday February 1st, it starts in Occidental, who else wants to go??? Here's a vid of the Old Caz. Register soon because it will fill up!

Sunday's ride will be approximately 3-4? hours, rolling from his house out Mosquito until it turns to dirt and up to Wentworth Springs, through Georgetown and back. Cross bike would be ideal but I am sure this can be done on a MTB or road bike even. He said something about beers and maybe even sandwiches afterward. And for that we will need a head count. If you want to go, let's plan to carpool from Mosquito meeting at 8:15am Sunday.

I thought this might be a ride report title from last week - but alas no.

The ride started off with perfect Jan. temps and a full pack. I'm pretty sure we were 9. There were a ton of count-offs, I should have counted.  In the end......
Oh hell this is a call out, not a ride report. I guess you had to be there.  Chicken Wing was there for the tacos, now that is something. Here is to new rides and the C-Wing back on the bike!

As for me, I am out again.
For those true CX guys in the clan - you know who you are -  and those of you missing the winter, here is a little reminder of so many good things.

Its a long one, probably only Cappy will watch the whole thing. I did cappy.  At least watch the first 3 mins and last 2 or so.  I might consider moving to that foreign land those lasses were riding in.

Zero
Posted by NoTacoHandle at 8:10 PM 11 comments: Links to this post

Pedaling into the New Year

Welcome riders to the new year of 2014. For those of you who were able to participate in the Knotty New Year ride, hopefully it was grand. Since there is not a ride report to accompany the callout, one is left to assume that the FT3ers that remained in the morning were unfit to post a report, and as such, rang in the new year in a 'proper' manner. Alas, we move on, ready to ride into the new year, while other parts of our country ensure harsh sub zero cold temps, we here in Cali will enjoy perfect temps in our Pollywood stomping grounds. Let's roll!

In 2013 we welcomed new riders including: Cutter, Buttons and Partial Credit. We lost a couple riders... Gold Wing and Squish have yet to return, and who knows what has become of the scouts? We endured the controversy over young riders, 18 and under, and one of our founding fathers - the one and only Taco Spawn returned with a vengeance. He made his mark on the Sacramento and Bay Area Cyclocross scene, and it is clear there are more podium's to be had by this FT3'er. As we embark on a new year, please help us to remember what was rad in FT3 2013, by filling in some events in the comment field. I will start the list with these;