Storm blew over, should be a clear night;

A rider who wishes to remain anonymous has re-joined FT3;

The Knot Hole is off the market for at least the next two years;

ONE
Posted by nocar at 1:43 PM 6 comments: Links to this post 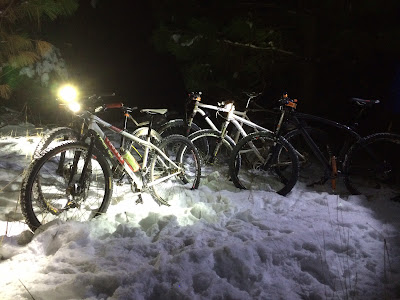 We knew from the parking lot that we were good to go when our tires crunched on the packed snow. And we knew that Newb was going to have a rough night as he slipped on ice in front of the mass of Spotters that stepped out of the Knot to watch us depart. Out the back, chugging through a few inches of crust-less white was a heart thumper, but 100% rideable. And just enough melt had occurred that we could make the climb from below the dam. MET was sporting, but not treacherous, and first tracks down the Skid Trails were pure exhilaration. 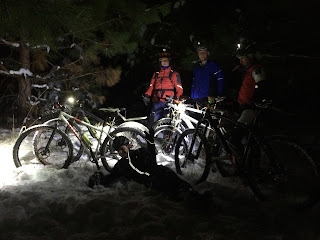 Newb, characteristically on the ground

A new rider joined us on this momentous evening. Given his fearlessness in the face of conditions that sent long-time FT3ers sniffling to Peter’s house, his fortitude at climbing, his gusto on the descents, and his general hard charging vibe, we taco-handled him Major.

After Ride Leader Xteric satisfied himself of making sweet turns in the pow, we returned to the Knot. Mother Rye stormed into the parking lot to hurry us up. We decided to determine who had the best attendance for 2015. And the award went to Major for perfect attendance. When Xteric couldn’t finish all the tacos in his basket, Major stepped up and finished them. 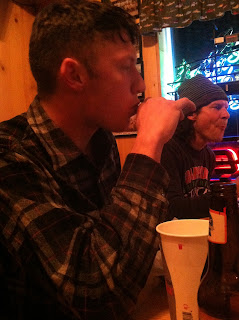 Hopefully, several in our ranks made Resolutions to ride on Tuesday nights. Or maybe we are better off with smaller, less whiny groups. We’ll soon know.
Posted by nocar at 4:00 PM 17 comments: Links to this post