In the last week or so, perhaps the biggest news in the cycling world has been the (choose one):

After almost 2 decades of racing, no veritable proof provided, and countless millions the USADA has spent making an example of him, he has decided to simply ignore the whole thing. He and his former teammates KNOW who won those races, and dear Travis can't take that away. This leads me to wonder what good will come of such a circus? Will little kids stop dreaming of racing their bikes professionally because a hero is presumed guilty? Will Trek, Oakley, Nike and countless other sponsors abandon their Golden Boy following this statement of ??(public flogging of Tygert and the USADA is how I read it). And what do I do with my little yellow wrist bands? Wear them with pride as I do my part to fight cancer or hide them in shame because the founder was tainted? In the end, it's not about the bike. It's about public personalities, ego, $$, and image. Which leads me to ask, going back 4+ years, how many KOM, sprint signs, amateur events and more involving FT3 could be called into question? EPO? PBR? Where are those samples?

In technology news, what about these new-fangled Type 2 derailleurs?

For those of us who have suffered years of chain slap over rock gardens, can we finally have the peace of mind (and quiet) we deserve? Call me old-fashioned, but I thought mountain biking involved a lot of inherent noise. We grunt up climbs, holler down descents, yell at aggressive motorists, and scream like children when we hit the ground. But now, NOW, we have the chance to bring calm to our drivetrain, serenity to our ride, confidence and ease in wrenching on our bikes. Have we gone too far? Is a noisy rear derailleur what has kept us from enjoying our sport? From landing on the podium? Next thing you know, they'll tell us cable shifting is ancient history, and we can avail ourselves of the latest in electronic shifting, auto-trimming, and....oh yeah, we already have that. And it IS pretty f'n sweet!!

Finally, perhaps we can take a moment of our Type 2/Di2 induced silence to mourn the loss of a new friend's old friend. Last week, Newbie's Stumpy suffered a devastating cracking of the down tube. We thought of duct-tape, or perhaps another FT3 welding party, but the damage was done. In an attempt to set the Guiness record for oldest warrantied frame replacement, Specialized was contacted and apprised of said failure. I'm told the rep "didn't sound too confident" and, alas, their lifetime warranty doesn't really cover a "human" lifetime. I wonder if it's a question of intended use? If they knew the hell that frame endured just in the last few weeks, I'm sure they would flatly deny any claims. Remember to pass on your condolences and any tips on a (medium) replacement frame. RIP!

Oh, and it's Tuesday! Let's ride. Bring your performance enhancements, your 80's equipment, and your 90's fitness, and let's ride!

A late return by wifey may force me to drive straight to the Knott. Will update later this afternoon.

ONE!
Posted by Counselman at 8:56 AM 12 comments: Links to this post

Holding Down the Fort

While some of you are out long riding and others are enjoying the cool and refreshing waters of Fallen Leaf Lake, some of us are at home holding down the fort. Alas, it will be the few and the proud who will keep the tradition of riding on Tuesdays alive this week. He who is of normal schedule please chime in and let your participation be known. Say it proud, say it loud.

This one time, at Band Camp 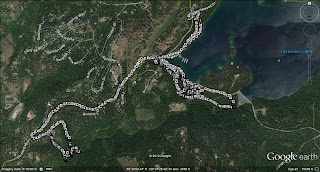 Just as we were all kitted and ready, I received a call from Xteric. He had just left Placerville and wanted to know where we would be riding. Rather than playing the missing rider game, I told him to hurry and we procured refreshments to bide our time while we waited. The Rideleader assignment was discussed. B remarked that he had been rebuffed by Cappy last week, and he still wanted to Ridelead. NoHandle and I then formally nominated him for the role and none opposed.

When we were finally scrambling to rollout, Booker suffered a paw pad injury while loading into RG's truck. The wound was serious enough to require medical attention by FT3 team vet, Squish.

The tenor of the ride was established immediately. We plunged to the lake, took one of the steeper routes to regain MET at Sly Park, and then started a dizzying array of dam drops and low country secret trails. Many (all) of the short and steep pitches are unnamed, and I could never begin to recall the order of them anyway. It was estimated that we were never further than a mile from the Knott.

Two riders earned special recognition for their prowess:
Xteric, resident puncheur, nailed the climb from the end of the first dam to the horse camp three times, while (to my knowledge) everyone else walked it. Therefore the trail section was dubbed XXX.
Noob let loose a harrowing wail as he careened the trail B called the Spiral Staircase. Dropping to Sly Park Creek from B's chin, this highly technical section keeps getting steeper and the price for failure keeps going up. As he flew out of control on the fully rigid stumpy his life flashed before his eyes. The rest of us were content to walk our bikes down to the tranquil pools at the bottom.

As awesome as the riding was, no call was made for a long ride. Coming in at 10 miles it was decided that there had never been a ride that packed in so many vertical feet for so few miles. After a refreshing dip we gathered around  a table at the Knott and laughed over the night's hijinks. RG in typical brash fashion ordered fish tacos. Mother Rye served them up with the comment "I used the smallest pieces of fish I could find." Much mocking ensued. 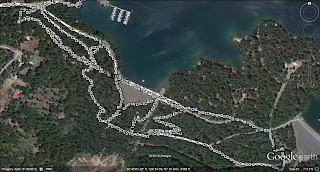 Posted by nocar at 4:35 PM 4 comments: Links to this post

Witch way did they go? 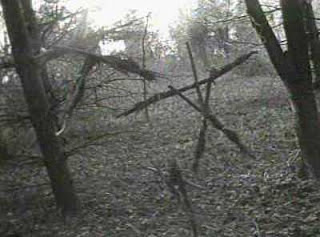 It was a full moon ride, and chock full of mystery and intrigue. It all began with a timely meetup and departure from the skeeter lot. Goldwing, Squish, Safety, Cap'n, Newb, B, Booker, and yours truly made a solid seven for what would be a night of firsts. Once suited up, we all argued over who would lead our motley crux. OK, not really, Cap'n and I argued over potential route choices, others voiced opinions, and with no clear leader, we departed out the back door. We dropped the equestrian camp trail to the spillway, then back up to MET and over the second dam to (surprise) the never-used horsey singletrack to lower Palin's. This proved a nice and techy start to the night's events. From there we headed back up to the Fleming fireroad and out to MET for a road crossing and then more confusion regarding our direction. We eventually rolled up Rufus a bit, then over to Ferrari Mill Rd and up to the upper Fleming lot. Then it was up Redneck Rising, with a slight pause mid-hill to help a six-shooter recover his missing English pointer.

Once atop MET, we headed towards the top of the Lips and yet another first (for me anyway). We decided to descend the left lip, but only after some searching for the proper entry point from MET. The drop was fast and furious, with no shortage of low-hanging fruit. Safely gathered at the bottom, we entered further democratic negotiations, with Cappy and I co-sponsoring a bill suggesting we head up Wedding March (another first for me) towards the Block, Flume, and then PC back to Powerline and a savory, deep-fried finish. At least that was the plan hatched at the time.

We commenced a CCW lake loop, did a quick safety check and flow assessment at the waterfall, and then headed up towards the campgrounds and the March. The Man was on patrol when we dropped onto the park road, therefor eliminating our poaching of the horse trail. We eventually made our way to 1A, and then headed for the March. En route, we detoured to Cappy's Slag pile, which was an impressive clear cutting just a skosh past the lower portion of trail below the March. At this junction, we were ALL IN. Once we reversed course, we needed to head north up towards PC, and again at the beginning (or end if descending) of the March, we were at full count.

You can guess by now, we were reversing most of our normal routes; climbing what are normally sweet descents in search of something different. Wedding March was devastated by recent logging efforts, so we walked a lot of it. At one point, near the top, there is a newish left turn cut in. The bulk of us stayed straight, and sightings of our last two riders went unconfirmed. Once atop PC, 5 of us paused for fuel and to regroup with Safety and Goldwing. The latter 2 didn't show as expected, so we waited, called out, texted, and more, until it was clear something was amiss. We eventually backtracked to earlier junctions, repeatedly calling and texting. We even performed a first-time 5 person, 5 directional simultaneous callout for lost riders (think 5 Tenors without the tuxes). At several points further down, we noticed these: 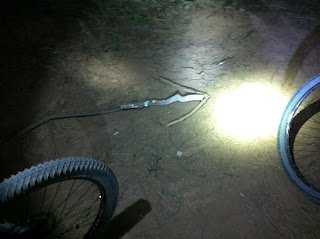 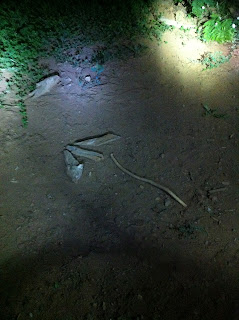 Things were spooky enough with 2 lost riders (how do you lose people walking uphill?), and then we found ourselves trying to decipher the source/intent of these arrows. There were 3 placements total, 2 pointing uphill, one final one near the campground pointing to the lake. By this time, we had firm contact with Goldwing, and knew they (a) were up at PC, (b) had no involvement with said arrows, and (c) heading down towards us. We met them just below the March, and it was a brief but joyous reunion.

Turns out they thought we had summited PC and headed straight for the Chopping Block. They proceeded to long-ride us by completing our intended route. They took the logging left off the March and were likely only a couple hundred feet away when we were waiting for them. They immediately dropped the Block, rode the flume back to PC, then PC to Powerline, before retracing PC to Wedding March and eventually our reunion. I heard 26 miles for those two, but that hasn't been confirmed. It was a strange turn of events, and the full moon, Blair Witch-like markers, and lack of contact for 1.5 hours left us perplexed.

At any rate, Mother had been notified earlier, and with her blessing we found our lost souls and made a rather late dinner entrance at the Knott. Luckily, there were a few remaining customers, and orders were quickly taken and dispensed. Table talk included a review and refresh of ride protocol, specifically the lost rider scenario. Tacos were a brief affair, and all were headed home by the stroke of midnight.

An otherwise interesting night, with some new route choices, a healthy dose of strange, proof that power-sharing agreements can be dicey, and the ultimate satisfaction of having left no soldier behind.


Posted by Counselman at 2:29 PM 6 comments: Links to this post