It's that wonderful day of the week, again.  Time to get those lights on their chargers, take a peek at your tubeless set up (unless your No Car) and toss some lube on those moving parts.  As I look at the current weather status, it appears we are looking at a 1% chance of rain at ride time.  Hopefully there will be enough precip to make those awesome trail conditions just a little bit better.  FT3's forecast is 100% chance of awesome.  And with a new 1500 lumen light on my bars, this evenings sunset might be a little later than normal.

Last week went off quite well with a gathering of RG, GreenFro, B, Buttons, Spawn, No Car and myself.  Trails were quite fine with a drop to the lake, some modified reverse 8 action to a really new trail leading to an older new trail back to the first dam. Then an assault on massaged left lip to the lake, up the right lip to the other new trail and finishing with a touch of lake loop.  Not too many issues except GreenFro's brand new light stopped working.  There may have been more shinnanigans that I missed while I was having a grand time shredding my bike, so feel free to add on.

How awesome will tonight be? 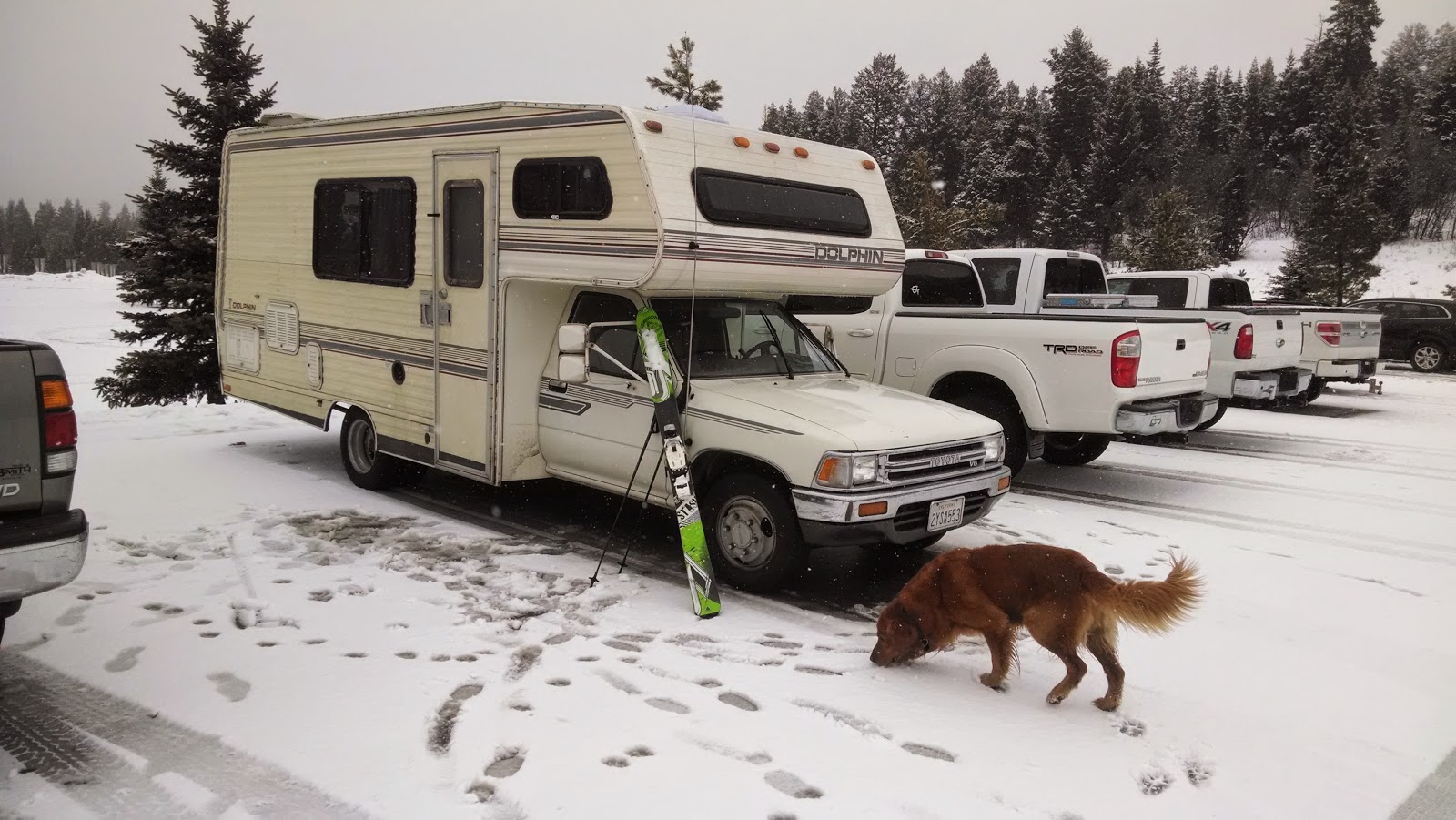 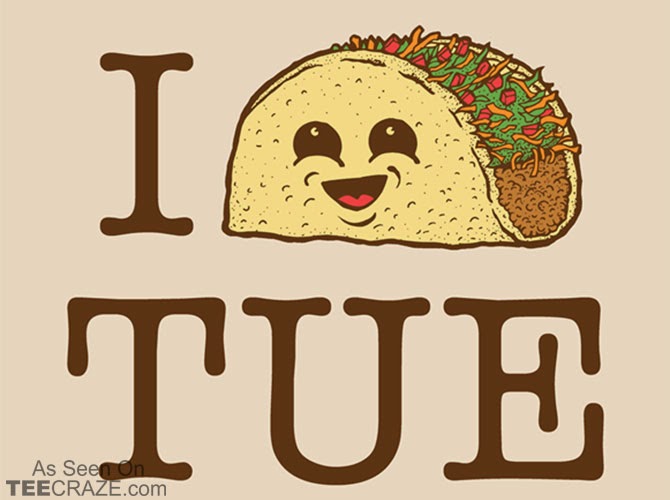 Facing the dire callout yesterday, I began considering alternative taco plans. But at the 11th hour Spawn and UL confirmed that they were IN.
Without any carpool offers, I was forced to ask my dog if I could borrow his car. He seemed reluctant, so I locked him in his kennel and took it without him realizing.
A moment after I pulled into the Knott Lott, Spawn hoisted the pre-BR flag to full mast.

We lighted out for the near single track, and Spawn looped the Scout Camp trails and some new things, including a redline climb and then the Chopping Block and a bunch of other stuff.
One thing I learned along the ride is that a number of FT3ers, including some HCF abstainers, frequently exchange comments too filthy for this family friendly blog. They use a messaging board called "Strava". Apparently all the cool kids are doing it.

After a proper 18 miles and four hand beers we returned to the Lott,  temps having dropped to frosty.
Taking the corner bar spot, we effortlessly closed the quiet Knott. Everyone got to-go packages of chili, three tier deluxe brownies, and pears. The scene was nothing like last week when;

13 riders turned up to shred trails. The funny thing was that the pack was arbitrarily divided into two camps: the short riders and the long riders. No surprise that Lars was a short rider since we was only riding the last half. Or Green Fro whose long suffering hub had finally given up the ghost. Or RG, because he had the sniffles. But, still others concluded that 9 miles was enough, and these riders sat at the taco table together and probably had an ok time. Just as they finished, the long riders returned from claiming the sweetest descent of the evening. After a hurried shuffling of drivers the second taco service started. Highlights include PC casually eating two tacos in two bites. 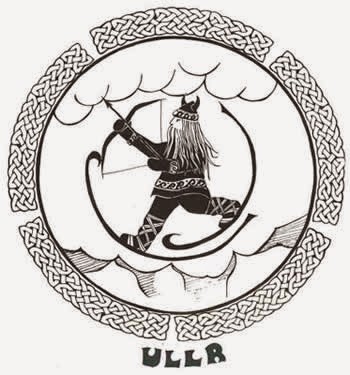 I know this is a cycling blog, but since many of us are ski-curious, and we have little to none of the fluffy white stuff, how 'bout we all gather tonight in prayer to the Norse God, Ullr. This will be a rolling prayer, with plenty of opportunity for confession, atonement, and straight up pleading, as we explore the increasingly dusty terrain in Polly.

One!
Posted by Counselman at 1:04 PM 10 comments: Links to this post

The most gracious callout ever!

I am writing this callout to give a hearty FT3 thank you to all the peeps who came out to support the Sacramento CX Race in Apple Hill. It was nice to see our quiet, serene and scenic ag lands transformed into a 'cross race course scene complete with Gheto sound system, wine cup handups, and FT3...

Thanks to Unknown Local, Councilman, NoCar, Taco Spawn and Rock God for making a showing and supporting the small FT3 contingent that actually raced. While he seemed to be there on business, I spotted Newb, and he appeared to be genuinely stoked to see I was prepared to tow the line. Even young cutter made a showing.

A big strava "kudos" goes to GreenFro and Lars, who got out there and threw down hard as hell, representing FT3 strong, running two by two for the majority of the race.

XTeric gets a huge shout out for doing some hand holding on my part, the original plan was for him and I to ride up there and cheer on Lars and Green Fro, who were set to race at 12:45, but as the A race became nearer, I became more antsy, and determined that I must make a showing in spite of the fact that I was coming off the couch due to illness (I think I had H1N1?)... So I pinned on my number, and we rode together to the Apple Hill Course, arriving in time to watch the two brave FT3ers finish in tandem.

Just then I put my game face on and tentatively rolled to the line. No callup for me, I missed to many races this season. As usual, the pace was high as hell off the start, the sweeping corners, tight turns and fertile tacky Apple Hill soil made for super fun riding. The bumpy vineyard section had a couple fun jump-able bumps and the steep climb, (run up for some) featured the best frigging cheering section known to man. FT3 hugged this corner tightly and each lap I was given an approximate 5 second boost as a result of this. It was a hard fought battle, some laps were better than others. I enjoyed a bit of back and forth with the legendary Rich Maile, who was fighting hard to stay in the top three of the single speed race (he finished 4th). I came unraveled a bit with about 3 to go. I was unfortunately lapped on this short course by the top four riders in my class just before I crossed the line with one to go. That was a bit disheartening, but altogether it went better than I would have expected given the circumstances. I finished 7th of 9 and got some good points towards the series overall, where I now I sit in the 8 spot. The next and final race is in old Sacramento on January 17th. Who's in?

Regrets? None. Pure stoke from this one. I am so glad to have been there, and truly appreciate the support from my friends. Taco Spawn knows how to encourage a racer, NoCar knows how to make friends and obtain access to a microphone, yeah, GHETO knows who Cappy is, and the rest of you were steadfast in your support. Thank you.

It is also notable that Cappy Junior towed the line at this one. At age 9, he finished 8th in the 10-14 age group. Here are a couple photos of him, I want you to pay particular attention to the race face in the pic on the line. The apple does not fall far from the tree my friends. 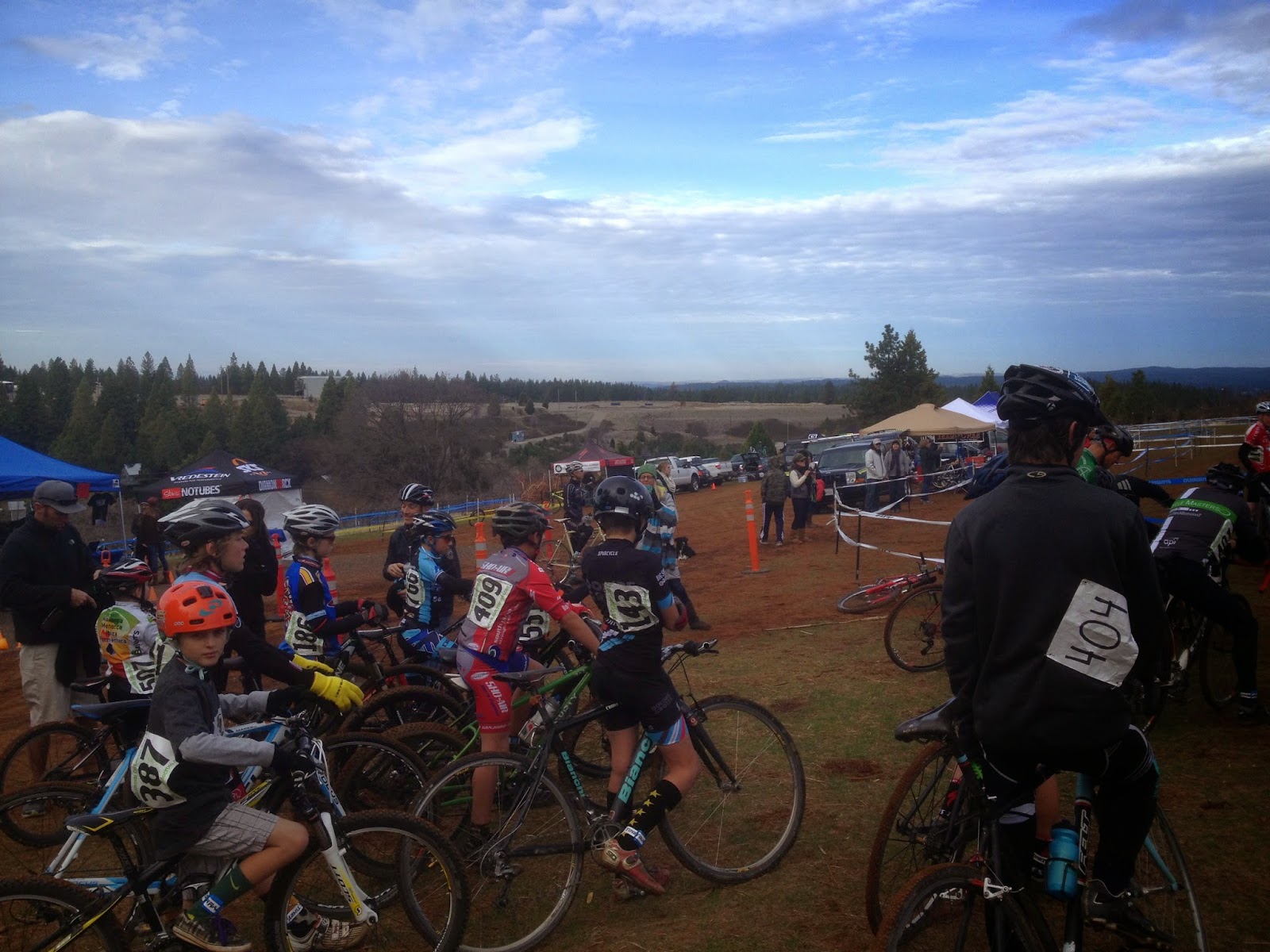 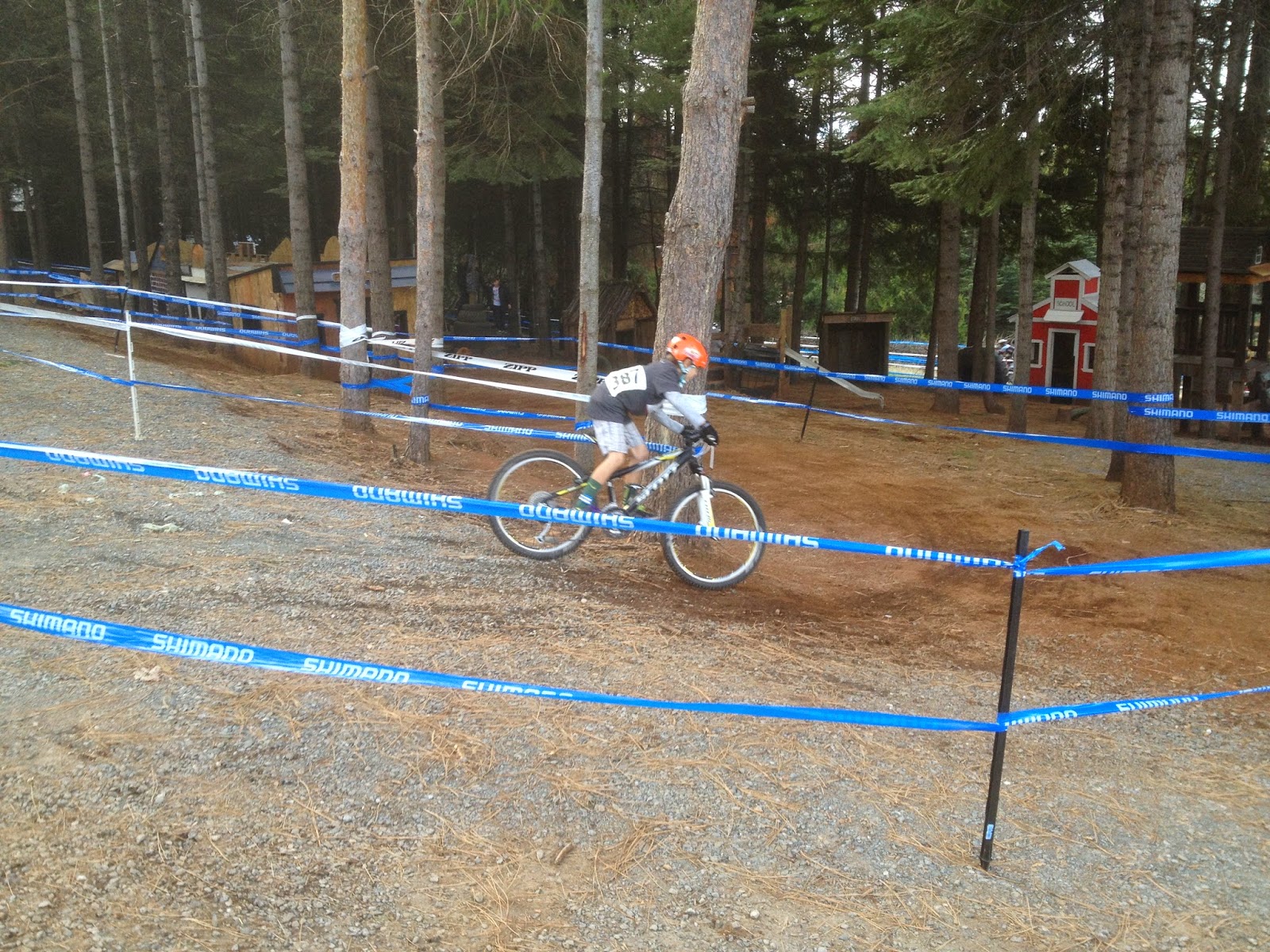 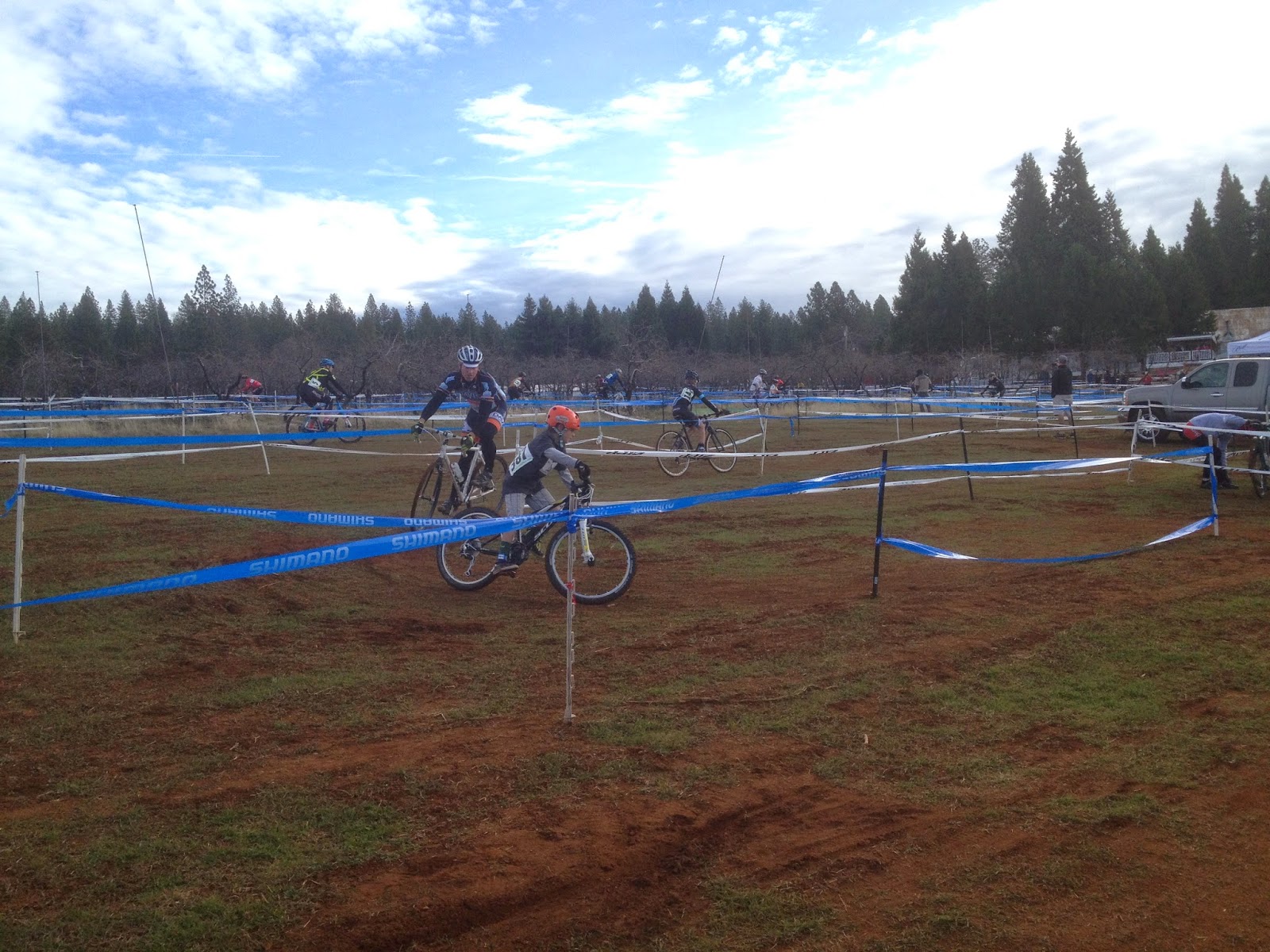 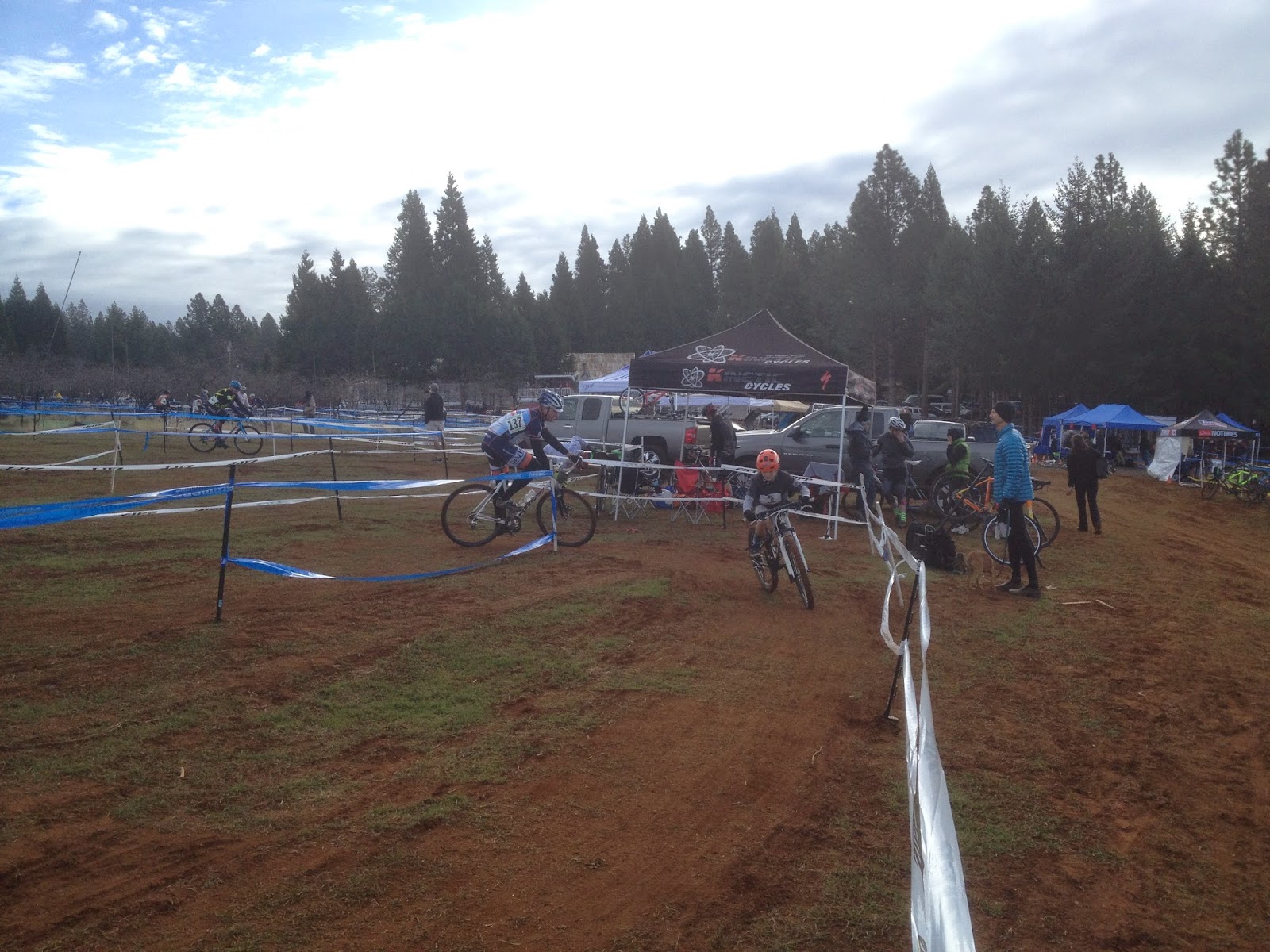 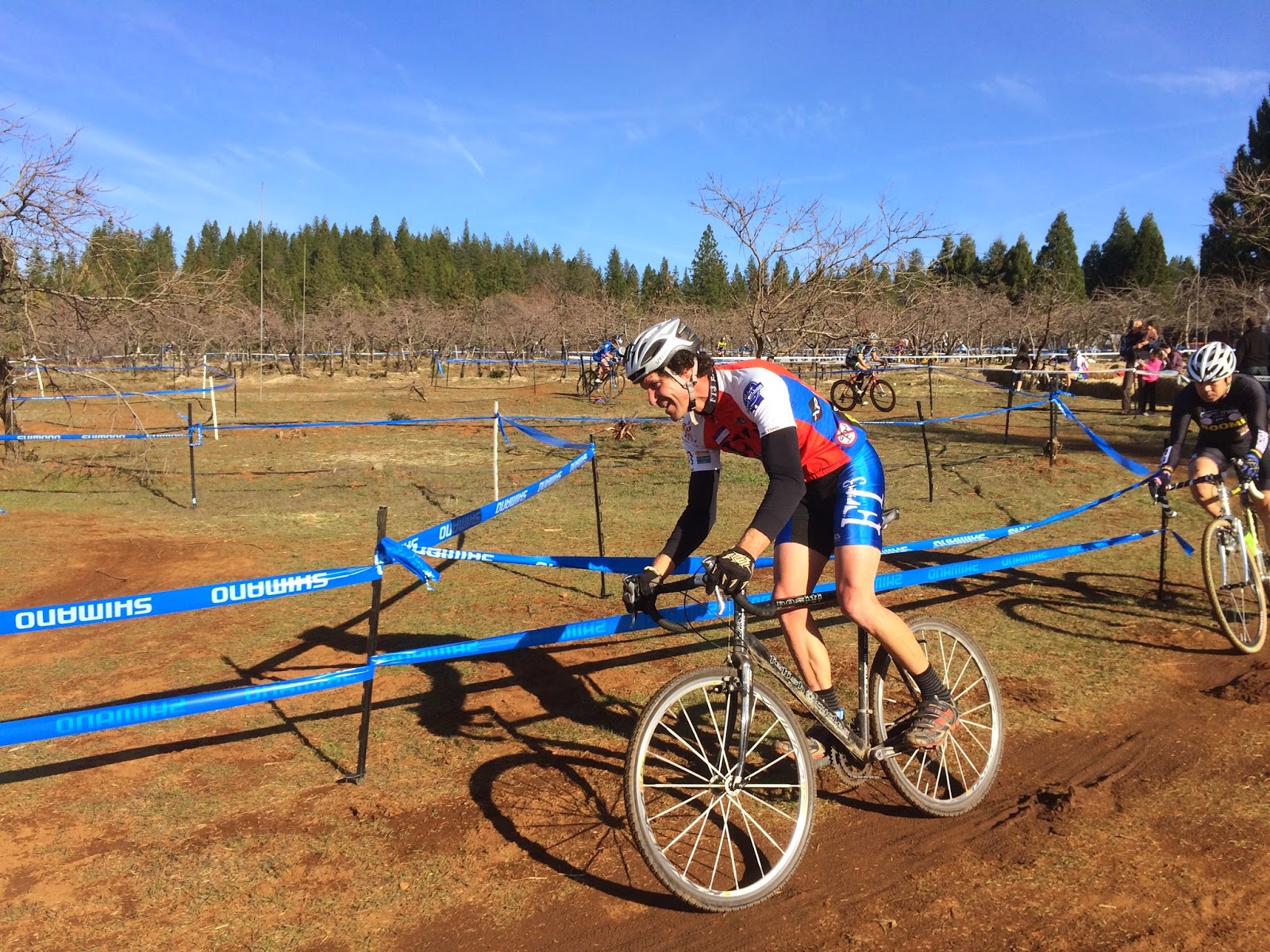 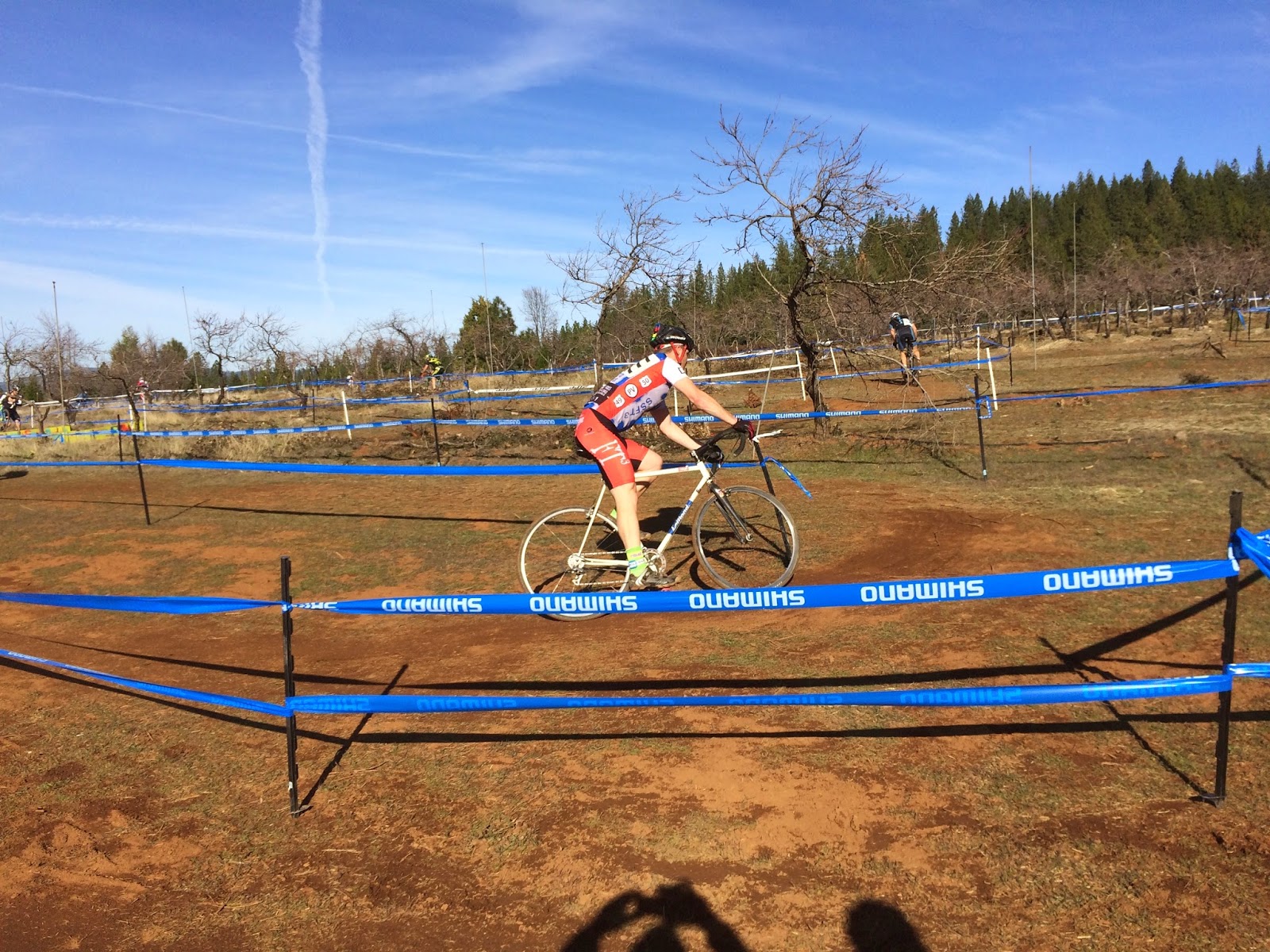 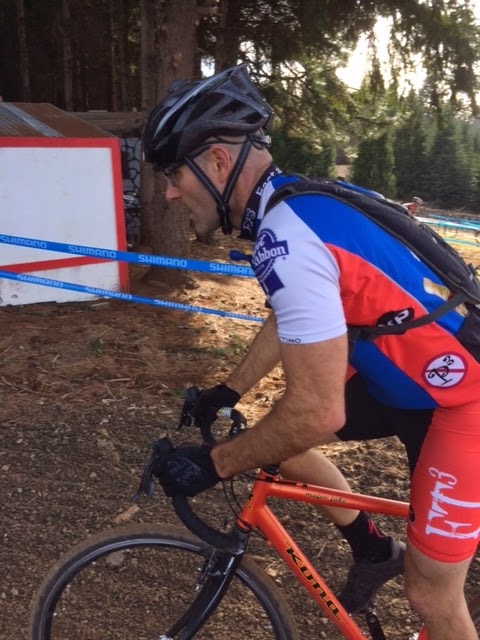 (( Please reaad below for NoCar's original post, copied into this one to re-merge what was merged, the lost and now merged again.  Oh the love))

P.S. GreenFro and I have both registered for the Old Caz, it is the epic cross ride we have been inviting you to for several years now. We hope you will join us on January 31st.

Last Tuesday saw low temps, dry conditions and a new surface texture. Pockets of brittle ice needles were often concealed under a thin layer of soil, so you never knew what your front tire might encounter. Ride Leader Spawn chose a rolling route, not climbing enough to get sweaty nor descending enough to get chilled. And all managed to stay comfortable in their original layer choices. The hot toddy at the start didn’t hurt, either. 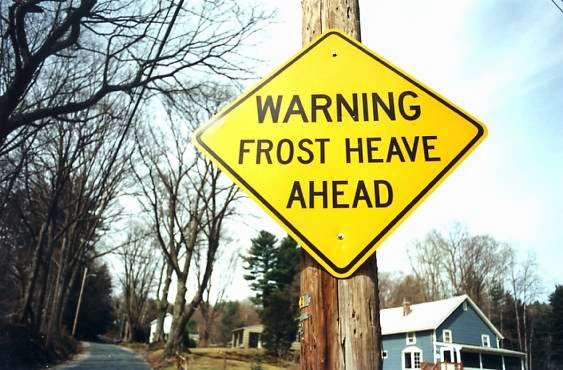 Since then, the frosty spots have turned into an equally quad-burning peanut butter-like mud. Maybe the soil has reabsorbed the moisture since temps have stayed above freezing for a few days. 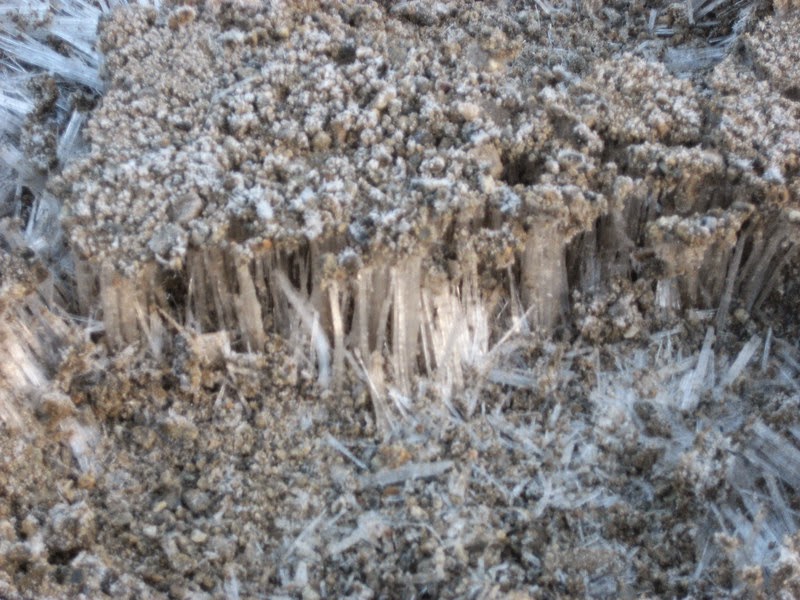 This past Sunday a crowd of FT3ers gathered at the Mill View Ranch for the Cmino installment of the Sacramento Cyclocross series. The list of excuses was much longer than the list of entrants, but hardmen Cappy, Fro, and Lars kitted up and toed the line. 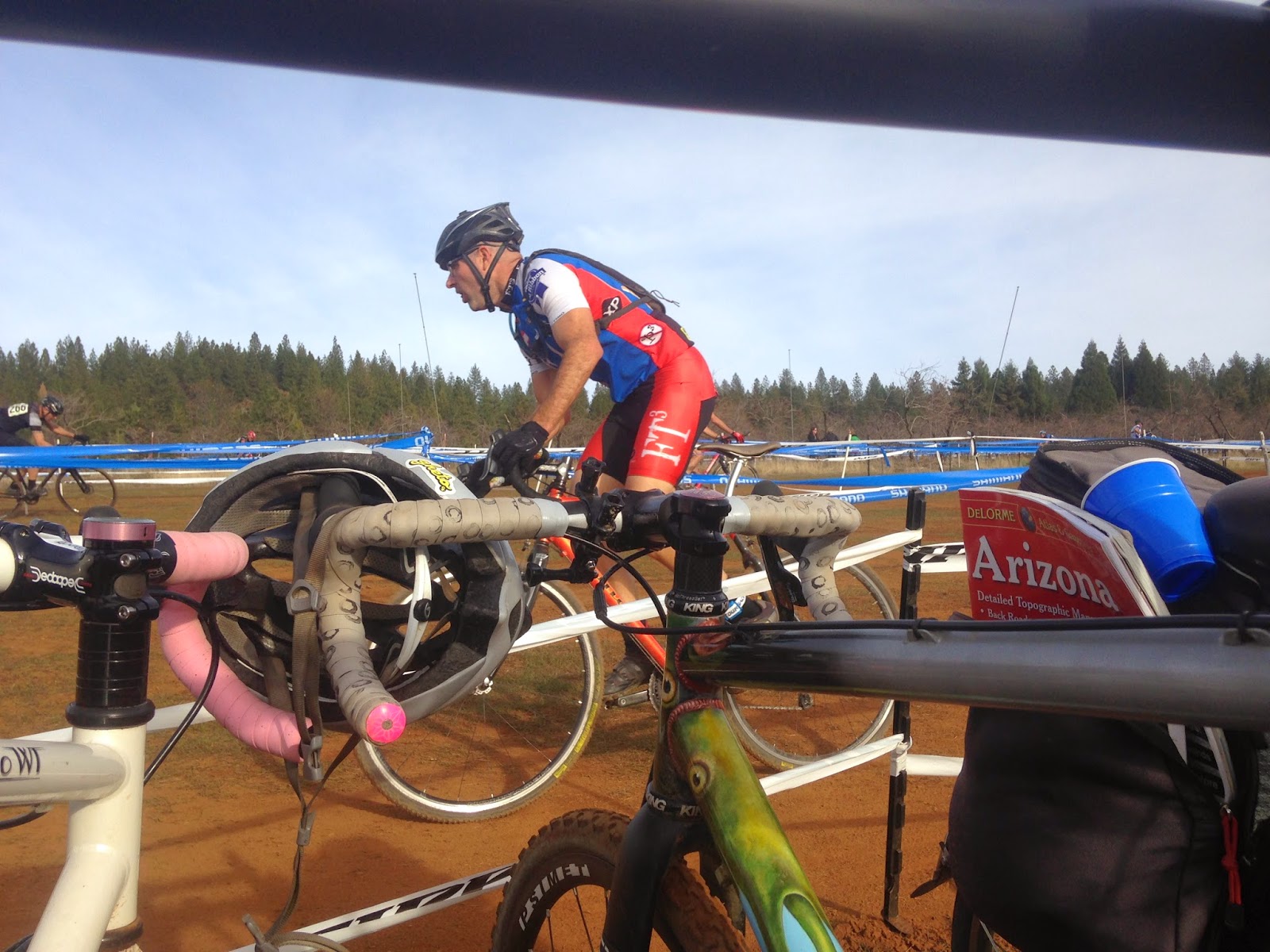 Should be a beautiful evening. There has already been lots of “IN” chatter. And Buttons has volunteered to baby sit for anyone who can’t make it on account of childcare duties.