An important message came off the wire this morning.

Jim Northey is hosting another free mountain bike race to test run the new site for the Coolest 8 & 24 hour race against cancer. Apparently, the new site looks like this: 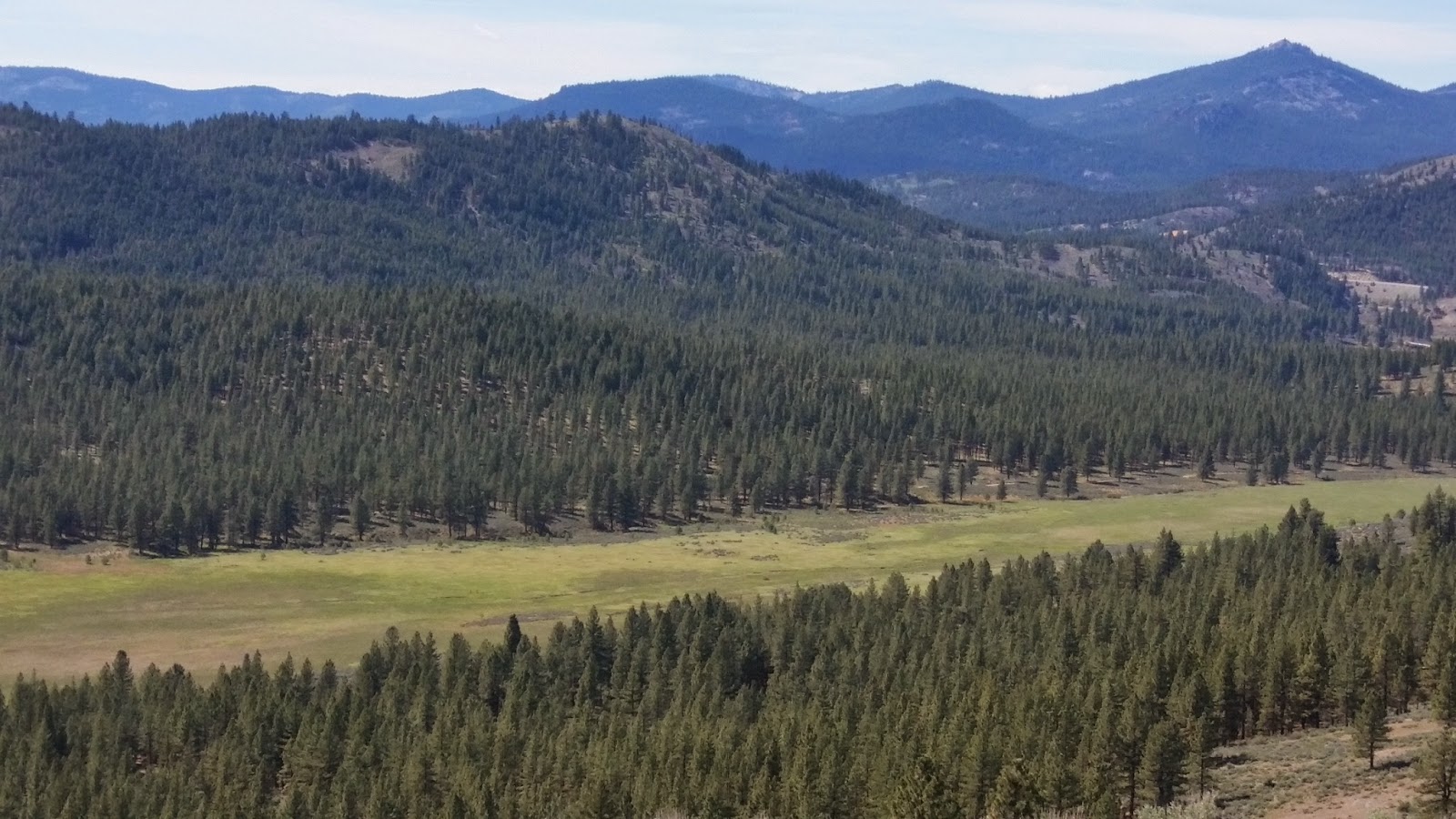 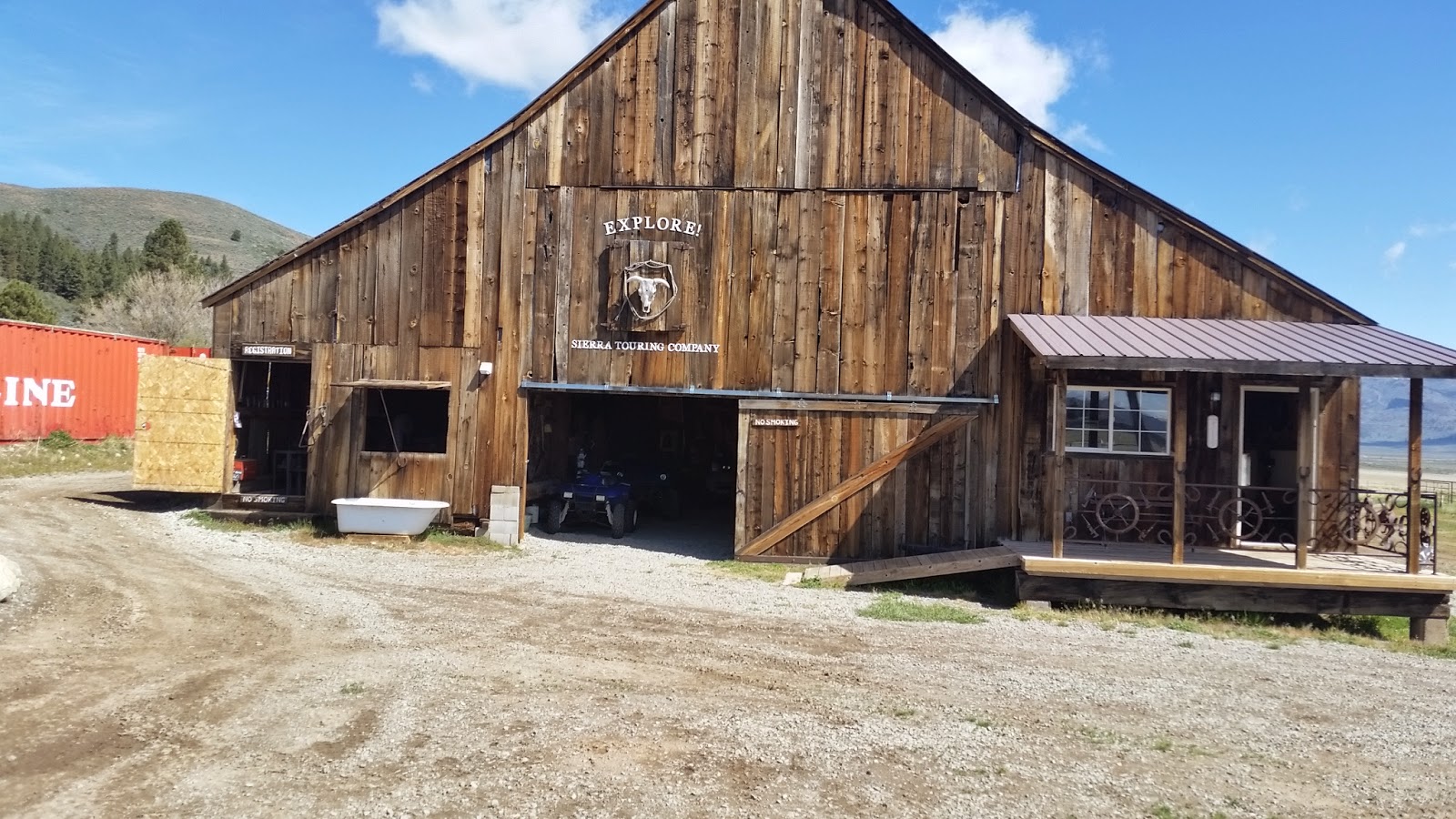 Some old business, RG is putting together a kit order. Don't miss this opportunity to pick up an outfit that is great to ride in and you can wear to black tie events. 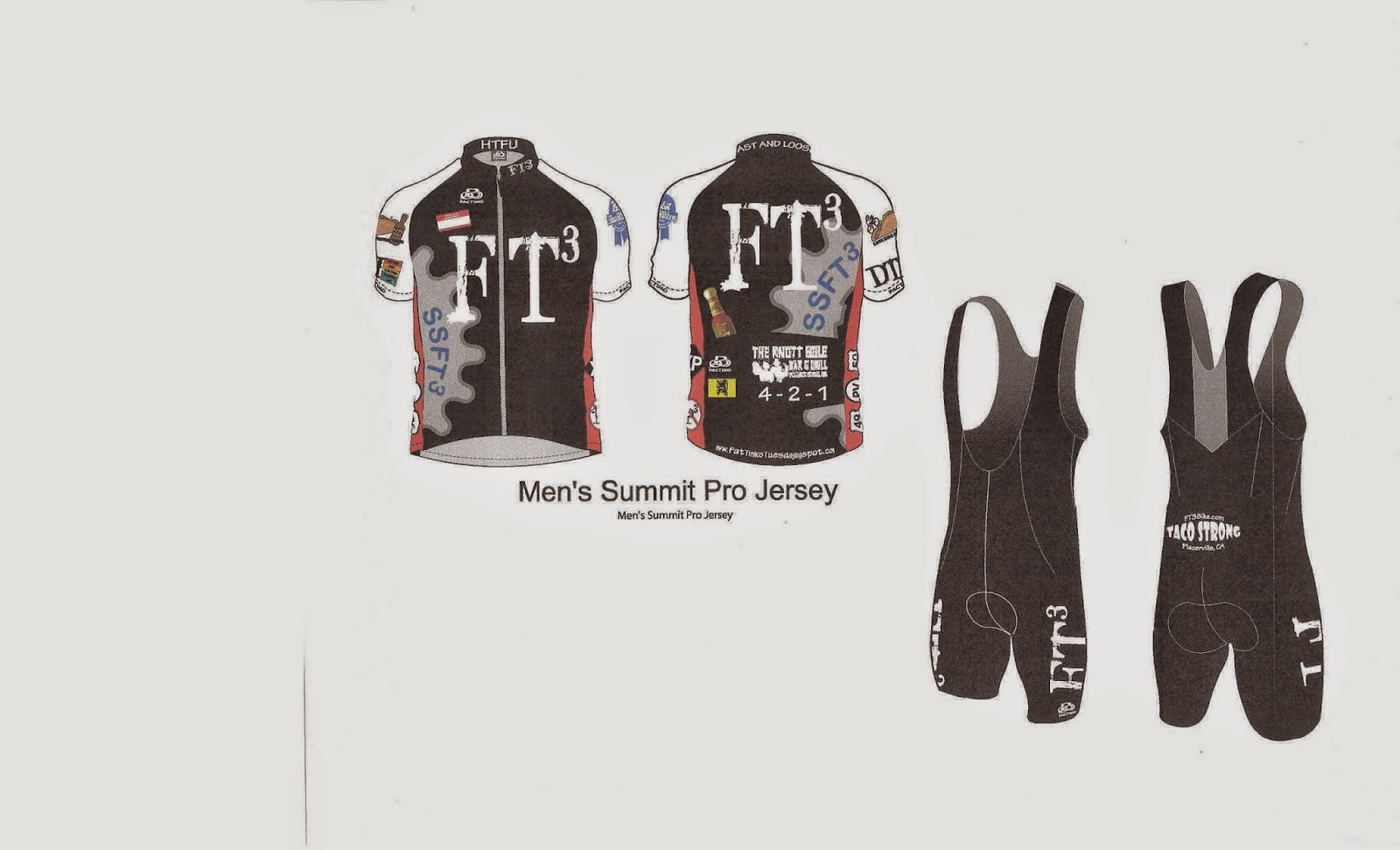 The brand Sockguy makes a foot cover that they call "Taco Tuesday". It matches quite nicely. 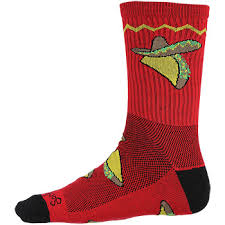 Finally, I announced a contest last week to see who could ride the farthest and end up at my house on Friday night. Strava records indicate that the victory goes to Cappy. For a prize, I will pick up his tab tonight. Prize expires at midnight 4/28/2015.

Full content of Northey announcement:
The Coolest 8 & 24 hr race against cancer is ready to go!! We have been working on the new course. The new Diamond S ranch MTB trail system is unbelievable!!
More camping area, plenty of room for big travel trailers, RV, pop ups. Beer booth, wine bar. No state park fee's!!
Live music!! No camping fee's not parking fee's. Raised fire pits only, dogs on leash. Pack out all your garbage that you bring in. This is all private land !! 27 miles of trails to ride.
registration is open now!!
There will be a FREE MTB race on May 17th open to the first 350 riders. Fat tire bike category, E bike category, cycle cross category. All race category's, Free kids race 11 and under.
This would be a great chance to get a feel for the 8 & 24 hr race course and its for FREE!!

New kit design draft is done, pricing and order sheet will be available at the Taco Table.  With the closing of The Spoke and the eminent departure of Our Dear Ride Leader I figured a symbolic gesture was in order.  Small graphic adds or replacements will be up for discussion, must be present for a vote.

We will start the sizing and quantity scramble this evening. 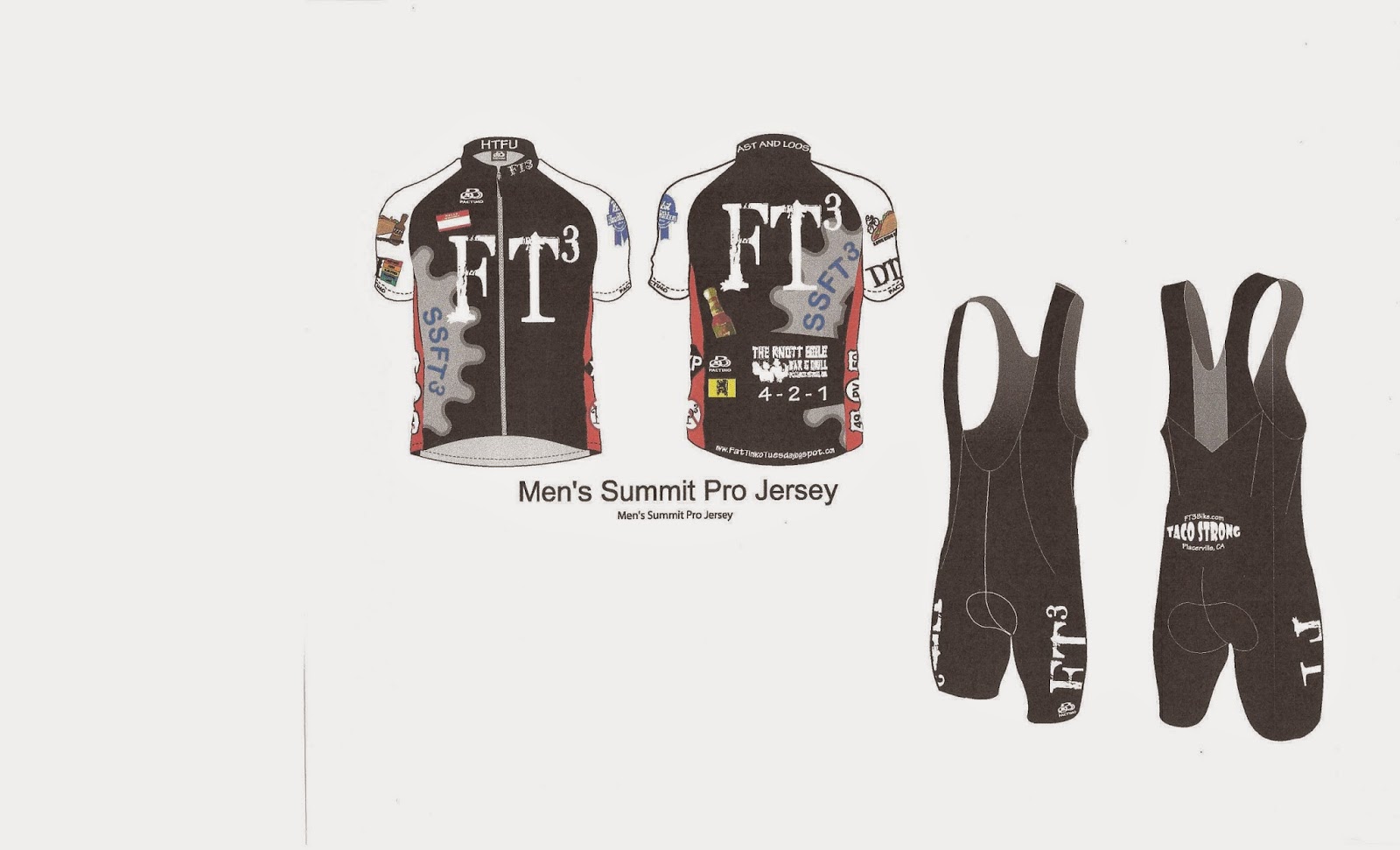 The Blizzard of Twenty Fifteen

We five hard souls met in the Knot Lot. Amid swirling fat snowflakes, we sipped strong tea and piled on layers of clothing. 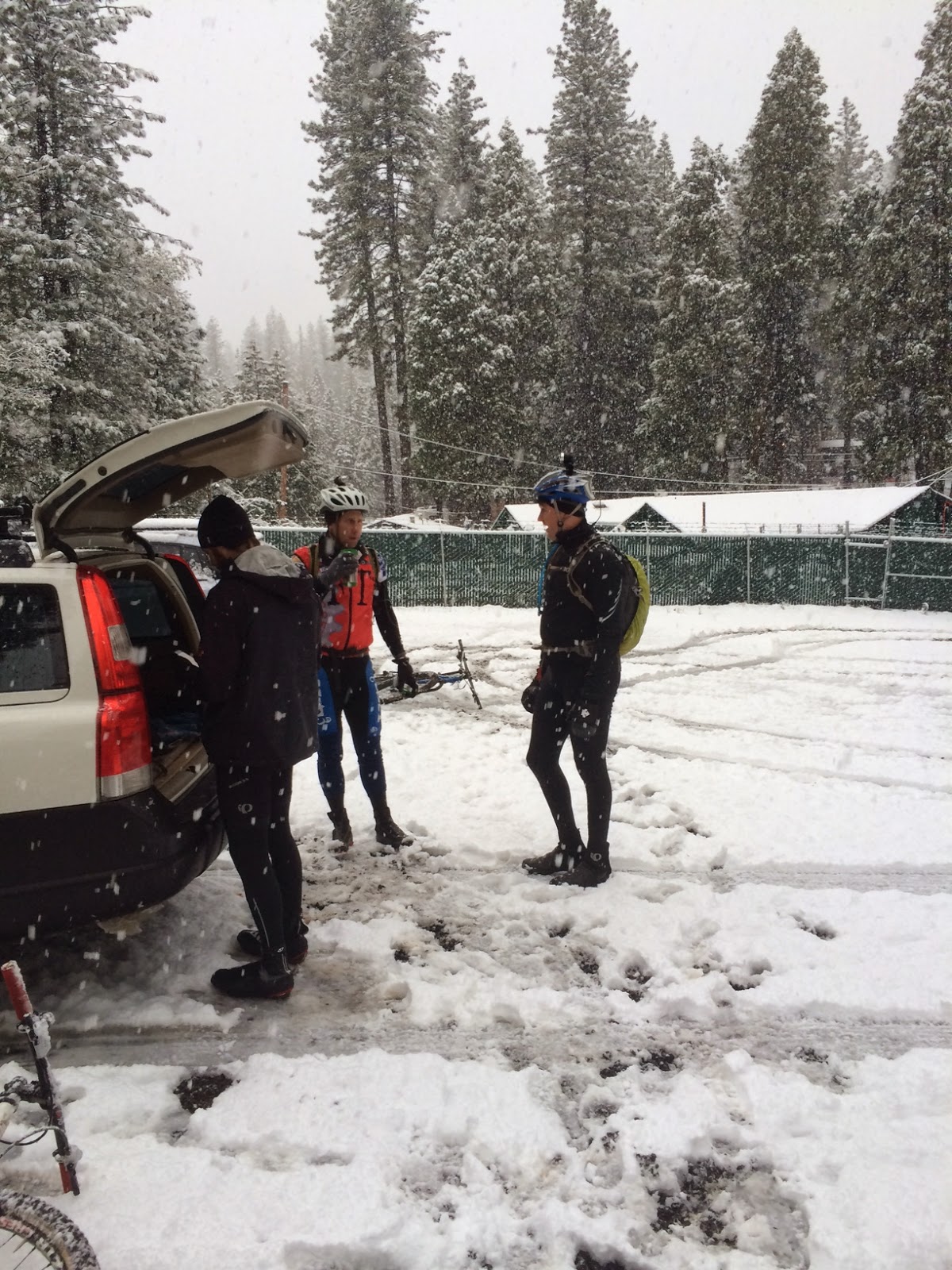 Given the depths of the drifts, The Supreme Ride Leader chose the easiest climb, MET. 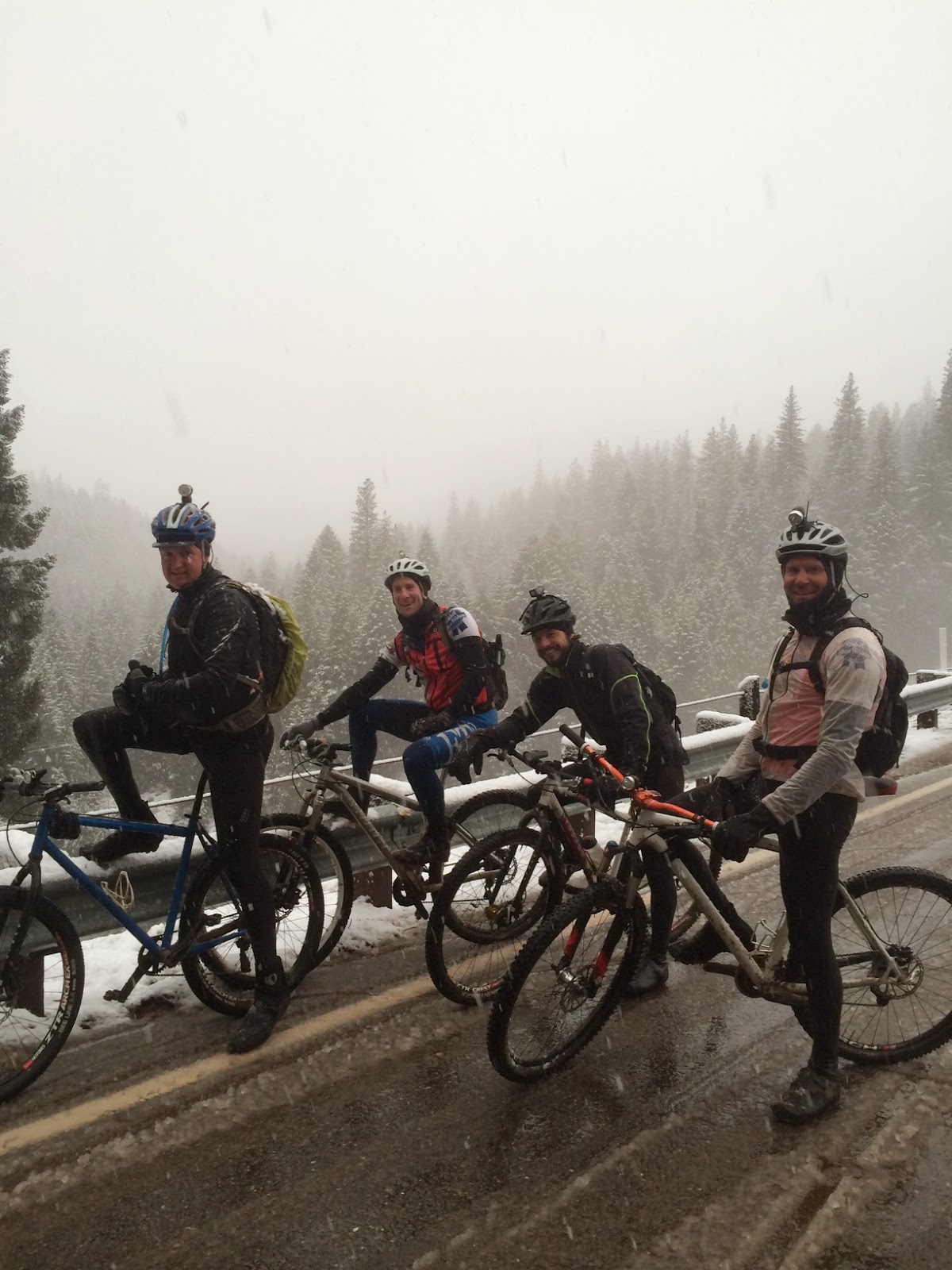 Several four wheelers drove past. They took video and called us crazy. The snow blew hard into our faces and tried to seep beneath our layers. For the effort it seemed we should have reached highway 88, but we only made it to Park Creek Road. When the Ride Leader asked if every man was committed to a descent that would be impossible to climb out of, we all shouted "Aye!" and plunged into the powder. 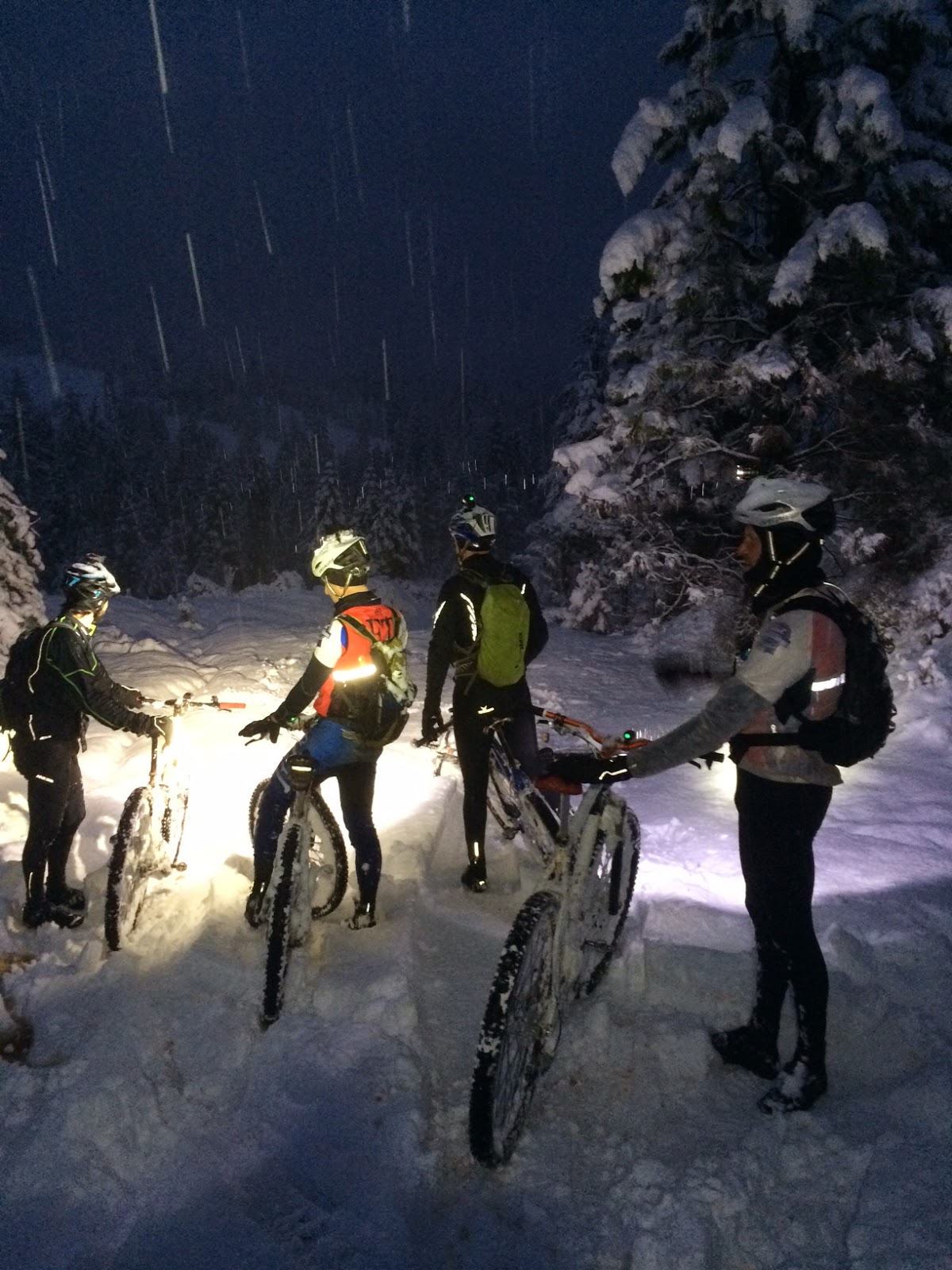 Our descent was a riot of white. Our hubs disappeared into the drifts, the snow spraying up like waves crashing into a ship's bow. 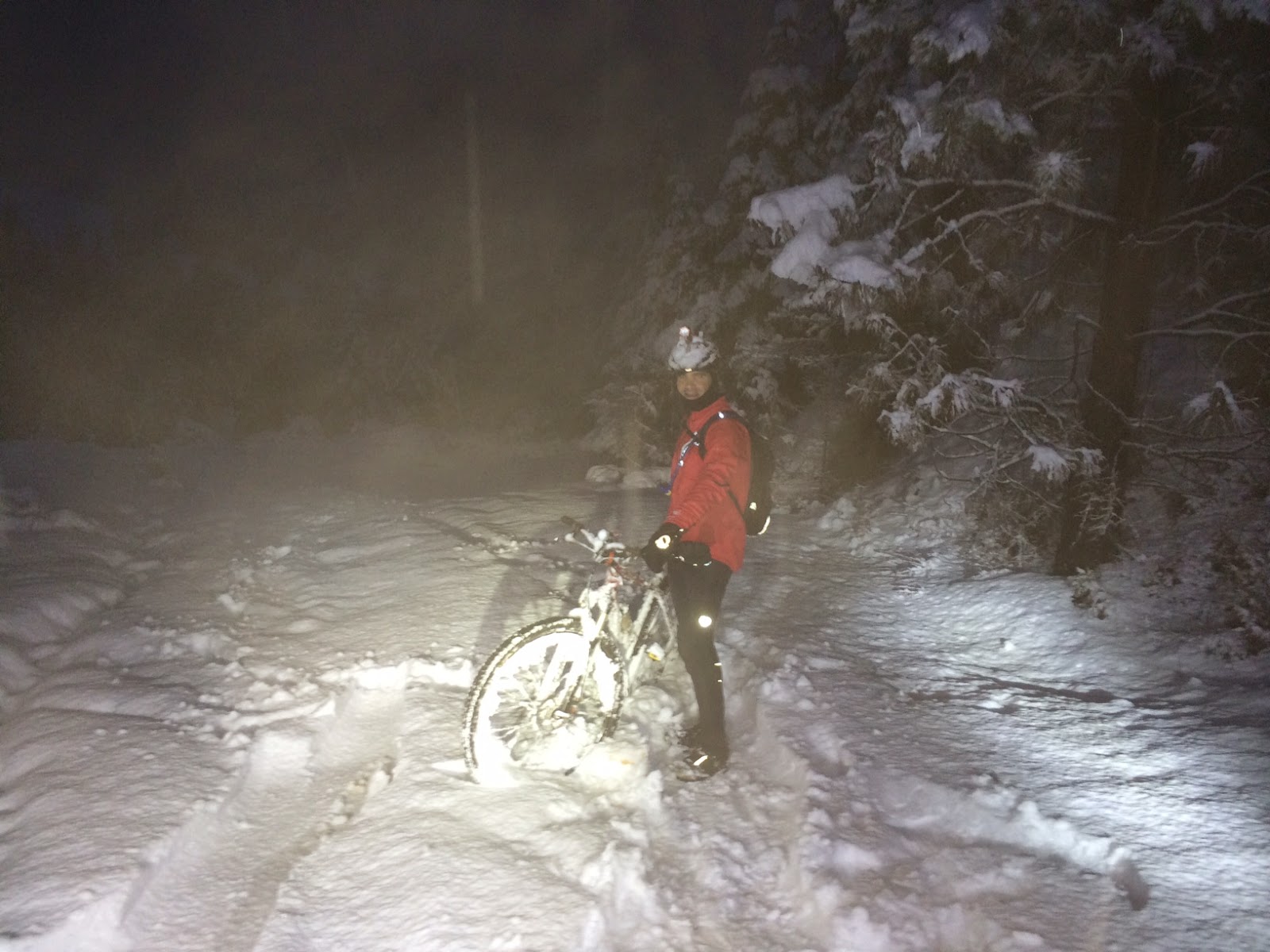 The little climb from Park Creek to Barnes Back was a mighty effort. Even shallow descents required pedaling in an easy gear. As we neared the lake snow turned to slush and the wet made everything cold and heavy. We made a beeline for dry clothes and tacos.

As usual (except, obviously, when Cappy is present) the Taco Table discussion included upcoming long rides. Taco Spawn is intent to produce his circumnavigation of Pollywood, including a staged camp site at Sand Flat. Should be coming up any weekend now, except for the weekend of April 24th when the big Nocar gets old party is happening. Consider yourself warned.
Posted by nocar at 5:12 PM 1 comment: Links to this post

Snow on the Dogwoods

Well we all know the saying that "Winter is not over until it snows on the dogwoods" so I guess this means that winter is officially over.

After weeks of amazing riding temps and traction, tonight's event is going to be a one of a kind for this year. After a quick check of the Pollywood weather cam and a visit to any weather webs site you can see that we are in for a wintry mix if not a full blown white-out. In respect of this being the first Tuesday of April and it being a sloppy one, I will be rolling my Old Soldier tonight (or maybe it is b/c my hub has failed again for the 4th time on my geared bike).  What a POS that wheel is.  Anyone want to buy it?  I might even pay you.

Please dress warm, maybe bring some flasks but don't peter out.  this is an important event to celebrate what little weather we get and that much of is is in the fluffy white form is that much more important.

One!
Posted by NoTacoHandle at 9:18 AM 15 comments: Links to this post

After a day of blog comments consisting mainly of either monosyllabic count-offs or criticisms of the lack of the thread's entertainment value as a way to whittle away the afternoon while awaiting the day's main event, the riders arrived at the lot in a convivial but purposeful mood. Nocar and PC arrived simultaneously sans vehicle, having serendipitously joined forces en route. Flouting tradition, PC deposited a sixer of Cali-brew next to the flag of PBR on the tailgate before flopping down in RG's camp chair to suckle a couple before the ride, randomly bantering with the assembling crew. A discussion escalated over the topic of used cycling shorts, somebody stole and then returned RG's bike; meanwhile nobody could keep their eyes off Nohandle's massive, sculpted legs.

Everyone pouted a bit over B's absence and then cried real tears when Spawn failed to show, just to get it out of their systems. Talk of new trail circulated. Perplexed by the lack of a default ride leader, the group of 8 elected Newb to navigate (being fast and therefore in the front anyway, a logical choice). Dropping dam play, we knew this was going to be an extraordinary ride. After climbing back up to the road, we veered off to sample the as yet unnamed singletrack newness. Friggin' sweet! all agreed. Around the lake, up left lip and then detour somewhere. More succulent trail. At some point PC complained about being tired or some nonsense and had the audacity to request a 5 minute stop to eat a sandwich, prompting requisite heckling.

Climbing rock garden, Nohandle's rear tire burped and began to spew juice. At this point, he had no choice but to pull out the pump that he stole from C-man on a previous Tuesday and reveal his transgression. After a spontaneous and intense tug-of-war over the pump, forcing the remaining six riders to form allegiances in support of either the plaintiff or the defendant, the contestants called a draw and agreed to joint custody, each carrying the inflator on every-other Tuesday. After several hundred fervent pumps and an equal number of increasingly adolescent remarks from the peanut gallery involving tube socks, Nohandle decided to roll on without resorting to tubing the thing, despite continued spewing (albeit at a lessened rate). 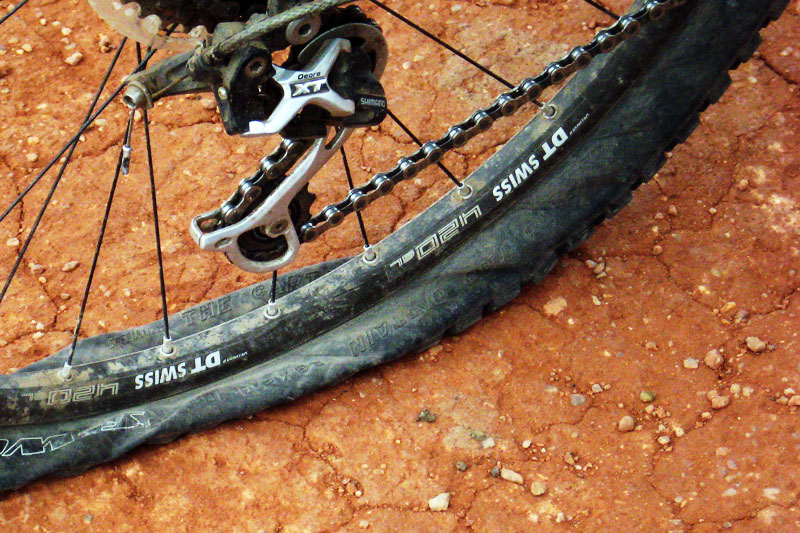 When one astute rider observed that it was already nigh on 9:30, fears of an early taco shack closing led to an every-man-for-himself flight back to civilization. Tacos were served with efficiency family style per the new protocol, prompting a standing ovation. Captain donned a suit and tie and offered a gallon jar full of homemade habanero sauce to high praise. By the end of the feast, we had taken down about 64oz of the tasty paste, as it made constant rotation from tray to face.

As the Knot emptied out, three revelers remained at the bar. To everyone's surprise, a scuffle broke out that very nearly led to a fisticuffs in the parking lot. Taco Bettys handled it with aplomb, though, managing the situation as a golden retriever owner might check the aggression of an unruly German shepherd in a crowded dog park. The FT3 crew looked on with incredulity, never having witnessed such an uncivlized scene in our otherwise orderly and, frankly, dignified watering hole.

But that's just my perspective.
Posted by partial credit at 12:44 PM 3 comments: Links to this post