Either go big or go bigger

After a lengthy debate on whether to join long, lost Ghostrider for a saturday of hot foothill asphalt, or spend the weekend ripping Tahoe singletrack, we chose the latter. What with the singularly perfect conditions, and convenient shuttling, we couldn't pass up the chance to bike from Mt. Rose to Echo Summit (almost). 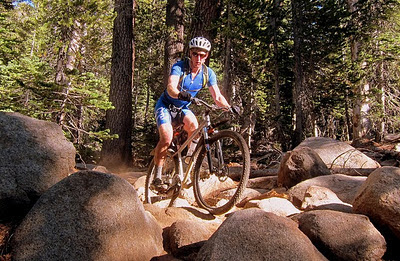 At the bottom, we met Drop Tail who had spent her day moving rocks and still managed more mountain biking miles than me and B. We retrieved B's car and moved it to a forest road near the bottom of Cold Creek. Then we retired to DT's where we assembly lined four pounds of ground beef, two pounds of bacon, three bags of buns and a pile of cheese into dinner and provisions for the following day.

Having prepped everything the night before, we stumbled out of bed, blasted the radio and tucked into breakfast. 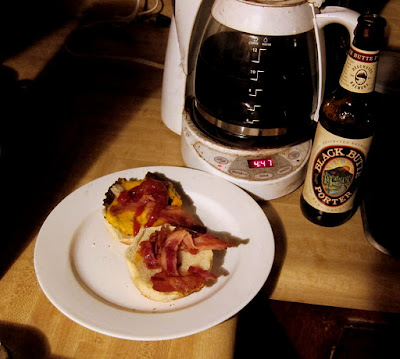 The original plan was to start at The Bench trail and ride to Star lake, where a new trail was being opened to the public in a ceremony around noon. While that may have been a big ride, it didn't quite seem ambitious enough, so we drove to the highest year round open pass in the sierra nevada - mt. rose. 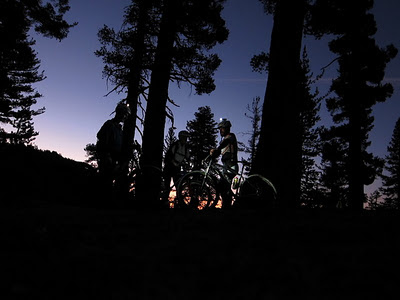 Fortunately, we didn't know what day it was, or we may have determined that the trail was not open to mountain bikes. As it was, we didn't see another soul, so we were obviously there on the right day. 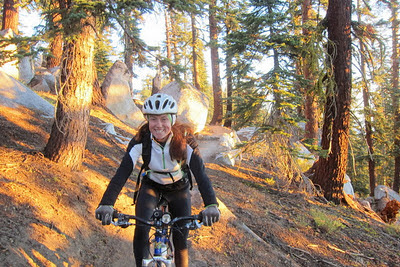 The serenity of the morning was shattered when my new GEAX tire went flat. This tire was so hard to mount when I first bought it that I carried a knife ready to cut the rubber off the rim and an old tire to replace it. B executed the tube change without the slightest effort.

We rolled the Flume trail as morning light filled the basin. 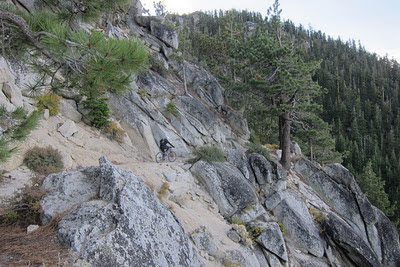 The drop to Spooner Lake was frost bitingly cold, 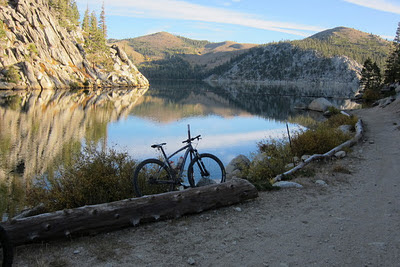 and we were relieved to begin the 5 mile climb up to The Bench. 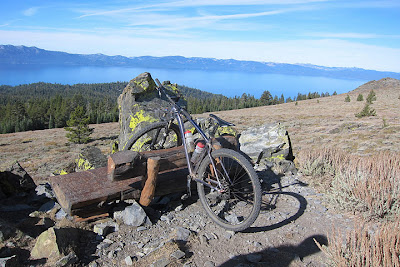 Countless swooping curves and granite blocks later we discovered a new dirt section of TRT that removed almost the entire asphalt section of our route. Having put down thirty-some miles we were ready to rest. And so we parked our bikes and pulled up stools at the Fox and Hound. Still burping food and beer, we churned up a steep pitch of loose sand, and back into the forest. Eventually we found Star lake and the new trail, and a long descent back to the car. 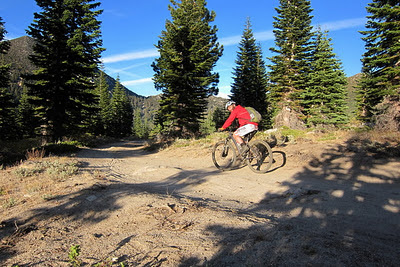 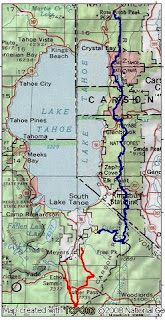 the return of rock god

After spending the last three months idling in the surf of his private Polynesian island, Rock God returned to the FT3 fold. To resume his dominant place in the pack, he claimed Ride Leader status while everyone else stared at their feet trying to avoid nomination.

We dropped straight to the lake, headed right, crossed MET to the horse trail, dropped, back up the switch backs, CCW Fleming, to Redneck Rising, dropped the lip, and, without succumbing to the democratic process that leads to short rides, continued CCW around the lake. Somewhere on Fleming RG took a spill (his third downhill crash in FT3 history) that left him bleeding through his kit and tore a hole in his twelve panel knee warmer.

With the late season draw down, normally submerged lake bed is dry and ready for riding. This new terrain offers cobbled technical sections, smooth rolling slick rock, boggy deposits of sediment and a little bushwhacking for good measure. While all riders tested the lake bed, the off-camber pitch and loose rock sent most climbing back up to the trail. Among the bold, B and Xteric rolled the lake to the bitter end, which was especially bitter for Xteric who pulled yet another off-bike crash. This time he managed to get himself wedged between tree roots exposed from bank erosion. Apparently, he was unable to remove himself and had to wait for B’s fit of laughter to pass before he could be extracted.

Tacos were a jubilant affair. With the bar packed and the weather warm we got a fire raging and sat outside. NoHandle was celebrating his 35th birthday (in dog years) and was fortunate enough to have a designated driver show up to take him home. Cap’n rolled up in his khakis and flip flops. RG made a sauce offering that brought those who tried it to sweat, cry, and hiccup.

A full calendar of FT3 events are slated for this weekend. Saturday: Ghostrider (so named for how he disappeared from FT3) has proposed a dirty road ride from Coloma, Cap’n will be racing ‘cross in Folsom and anyone who rides to the Folsom race in time to watch Cappy’s kids will earn free beers and a ride back up. Sunday: the former Xtera racer turned golf pro Putter will be hitting the links and shuttle parasite nocar is clamoring for an all-day mountain ride.

Posted by nocar at 9:40 AM 3 comments: Links to this post

It all started in the Knott Lott. B mashed up the spring in his brake while remounting his front wheel. After he finished pouting, and Bambi mended the part, he considered swapping pads around. This led to crass jokes about feminine napkins which portended the bleeding to come.

We started a bit late. B, Safety, and I agreed to a 6pm, mosquito pick-up by Xterric. Rock God showed up to sniff out the mood of the evening. Being too unfit to ride (???) he salvaged his ego by criticizing Safety's granny gear. At that point, we loaded up and RG set out to totally crush the bike path. We were so tardy to the Knott Lott that we missed the other sniffer. Larz stopped by the knott lott after a gen2 ride. Unfortunately, that outing left him too winded for FT3.

Lights blazing we followed B out the back to the Chin drop. The soil was saturated, but fluffy. Tires gripped well, but would break traction suddenly. We climbed Fleming CW. Dropping past the parking lot on the new-ish connector trail B oversteered on a fast corner. I arrived just in time to see him picking up his bike which was facing the wrong way. A scab on his elbow had ripped off and his arm dripped red. But, no matter, onward. We tackled 8A, then cut back out to Redneck, crossed MET and dropped the Lip. As Bambi raced ahead, I settled back, riding protectively of my frail collarbone. I caught up with the front to see Bambi pulling himself out of the bushes. His leg looked like it had been clawed by a mountain lion. At the bottom of the lip rideleader B democratically allowed a vote on a CW or CCW lake loop. Bambi claimed he would be forced to whimper like a baby if we rode the long way. Xterric protested that Mother Rye would be upset if we came back late. This left a tie, as B and I preferred the long ride. The vote fell to Safety who, always concerned about the well being of his fellow riders, chose the short ride. Like horses to the stable, the pace picked up at the anticipation of tacos. The last fall of the evening happened off-bike. The pioneer of such classic dismounts as the no-mo-endo, was hopping over a log when he misjudged his landing and plummeted over the cliff edge towards the lake. He reportedly suffered minor rectal injuries, but that was never confirmed by inspection.

We were greeted with first aid kits and home made chips at the Knott. In order to make sure we didn't feel too welcome, B was no-tacoed. When I went to pee at the end of the evening, I momentarily thought I had stumbled into the wrong room, as the trashcan was vivid with the waste of wound washing.

Still feeling vigorous, B and I got back on our bikes after tacos. We enjoyed the crisp night air on the Sly park climb and then basking in the light of the harvest moon, we sat back and coasted to the liars bench.
Posted by nocar at 12:41 PM 2 comments: Links to this post