Good night for an umbrella 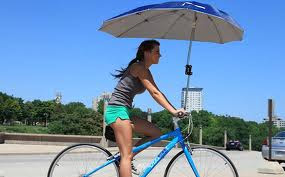 Soggy mountain biking couldn't compete with the gripping excitement of Peter's Chutes and Ladders tournament. Hopefully we'll get a game report from the many FT3ers who attended that.

NoHandle and I formed the rarely occurring two pack. We carefully prepared in the Knott Lott, guzzling prebers as the storm clouds built. He outfitted himself in a suit that would make an astronaut envious.

Spirits were high as we rolled the Qualifier at a conversational pace. Turning down the wedding march the need for caution became obvious as I nearly took a high speed skid into the trees on a slick layer of deposited silts. On to the Rock Garden, where a horse had kicked a large rock into the middle of the path at the crux move, robbing us both of a clean ride. Continued around the lake looking for snow. About this time the carbon stumpy developed a wicked case of chain suck. The Spot freshly anointed with new lube ran smooth all night. 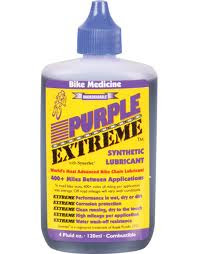 Finished the lake and turned up through the equestrian parking lot to MET and Blue Gouge mine road to Fleming. The rain, which had maintained a consistent rate, pounded us once we were out of the cover of the trees. At this point my less than Arctic expedition worthy layers were well soaked and the cold began reaching up from my hands and feet. It's probably best that attendance was low. There would have been some whining.

We climbed the low rise of Fleming CCW, to get some downhill teaser before Palin's Plunge. For fun we counted off. One, two, all in. The air thickened into a cloud that reflected our light. Palin's was surprisingly dry. We crossed a patch of snow, so perhaps she wasn't dry, but frigid.

Climbing out, NoHandle, as any good rideleader would, proposed a long ride option. When I admitted that I wouldn't mind taking the more direct route, he was all too happy to comply.

We were welcomed with open arms into the Knott Hole. Easing onto stools in front of a vast selection of sauces, Mother brought out our beers one at a time to keep them cold. The bar was empty and we got the low down on the latest goings on in The Pines.
Posted by nocar at 9:13 AM 1 comment: Links to this post

I consulted with the farmer's almanac and found a troubling indicator for Tuesday March 27th 2012, in the Pollock Pines area: 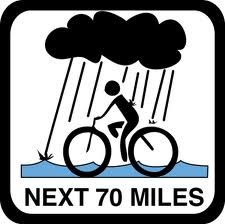 Not that anyone in the FT3 pack is afraid of mud. In fact, we thrive on it. The worst thing that a rider can do is avoid the mud for too long. Because, then skills decrease, handling becomes erratic and uncertain, which leads to
Epic Failures 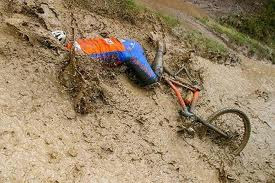 So take a dose of preventative medicine and head for the trails.

After blowing up the call out HCF, but still deciding nothing, six riders met at the mosquito lot. Everyone had unique expectations for the evening, and no two plans were the same. As B, Cappy, and I tried to convince NoHandle that we first and foremost wanted to ride as a group, he stubbornly maintained that he and Bambi had scheduled a date ride and we weren’t welcome. Until Bambi rolled up with a crosser instead of a niner, showing that he had switched camps.

The consensus building exercise that followed was awkward and slow. Eventually, NoHanlde got into his new Cannondale shorts (which Cappy openly coveted), all the bikes were unloaded, tire pressures adjusted for what would mostly be a road ride, and we embarked, as described by Safety:

B, Captain, Bambi, Nocar, No Handle, and I gathered for a 6:30PM launch out of the mosquito lot. THTH and I were on 29ers while other piloted cross bikes. In short, we took 49 out towards Cronan Ranch with some dirt on the way. We rode around Cronan, and other trails by the boat launch off 49. Then we headed back stopping in Coloma for some food at a local convenient store. We got back to mosquito after 11PM.

Highlights of the night (for me) include: B’s chain falling off fourteen times; Cappy declaring that we would not cross Hastings Creek because that would involve too much time not riding; frogs everywhere; finding the Sutter Center Market still open at 9:30 with the proprietor openly amused at a pack of spandex clad customers filling up on snax and micheladas; cornering Safety off the back on the long climb home and peppering him with work related questions which he breathlessly answered; rousing Xteric from his house by shouting from the highway like juveniles in a street gang; longriding everyone else as I spun the thousand foot climb home.

Watch for a callout in the near future. Cappy plans on making his not-safe-for-Tuesday fantasy ride an official long ride production, complete with realistic distances and ride times.

As you may be aware, there was a fair bit of snowfall over the weekend. My sources indicate that the trails we usually ride on Tuesday's may be under a bit more snow than has been customary this winter season. Note, I didn't say unridable. Paul did several rides over the weekend, plus a couple long distance swims, as he too is tuning up for an Xterra this summer.

Anyway, I would like to throw out the option to bust out 'yer crosser tomorrow and embark on an recently discussed journey, as follows; Depart Mosquito lot at 6:00pm, ride to Coloma, then ride Cronin to Salmon Falls. Then ride into El Dorado Hills, where I will treat you to some of their local single track, and possibly a fuel stop, then roll some back road combo of dirt and road into Cameron Park (yeah, I got that too), fueling again in Shingle Springs, where we pick up the El Dorado Trail for the roll home. I would estimate this adventure will take approximately 4 hours and it obviously will include some road riding. I am floating this today to see if it has any traction. If not, well, feel free to put another call out up tomorrow with other options. I am just going to come right out with it now, even though it would give me the chance to be the taco golden boy again, I am not up for an FTSki, I prefer to ride. With that, I am opening this up for discussion in the hidden comment field below. Get 'yer discussion on. Oh, and who got the reference in the title line?
Cappy
Posted by Cappy at 1:37 PM 46 comments: Links to this post

We were all quite pleased to see NoHandle flying the SSFT3 flag on his tailgate. 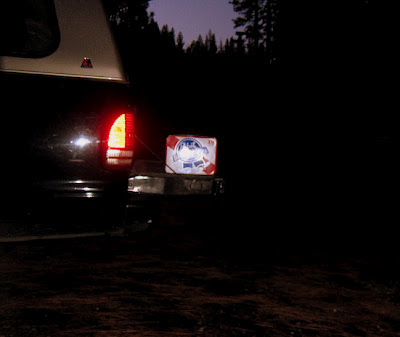 As we carefully chose which layers would best suit the evening's temps, a stealth figure rolled in on a white steed. Our Dear Ride Leader made a surprise appearance.

A pithy six pack plus canine, we swooped to the lake, climbed the first half of Chiquita (Larz cleaned it in his little spinny ring) dropped horse trail to Lake back towards the dams and cut into Fleming. It is important for this narrative to note that we didn't go around the gate like some saturday afternoon leisure riders, but climbed a hair further and dropped the rutted shortcut. For some reason Cappy was momentarily help up at this point and fell back in line. We made a quick right and dropped lower Palin's back up the road to the horse trail switchbacks and paused at the top to regroup. Everyone looked around, "was cappy in front?" "no, I thought he was back with you?" I cracked a can of trail refreshment as we chuckled at the most unusual of phenomena -a dropped Cappy. Larz was planning on short riding, and had to continue towards home. The only way to ever find Cappy meant going back to where we saw him last, so we deployed a pincer formation, with Xteric and I riding the dirt (and thus long riding everyone else) and B and Nohandle taking the road. Sure enough, the dutiful "Company Man" had returned to the point of lost contact and waited.

Now Cappy was veritably trembling, his desire to ride was so great. Before Nohandle could say "you can be ride leader now," he was already charging back to the Lake and the Horse Trail, then up the right lip, where we devoted a good deal of time attempting trail maintenance, only to be confronted with an enormous downed log some fifteen feet further. Along this climb, I was punished for claiming I wouldn't change gears since it was single speed night, and then proceeding to change gears with impunity. Sticks caught up in my wheel and drivetrain, torquing my derailleur out of line. The only rideable gear was a bit stiffer then I like. We flew down the left lip, turned back towards the dams and, at MET, Cappy turned towards Fleming. Well, this area had been something of a vortex for the evening's ride, and that strange force peeled another rider from our ranks. Nohandle declared he had ridden as much as his tapering schedule would allow and he pointed his bike towards tacos.

The best surprise of the evening was waiting at the bar. Not only did Mother Rye find a half bottle of Garlic Pain in the back corner of some cobwebbed closet, but she also found a fresh bottle of Jamaican. Tacos received thick pours of that sweet and spicy goodness. Our favorite taco bitty noted that she may become a blog follower, so say something flattering in the HCF and you may up your chances of getting an Ace cap. It was alleged that B may have been served a taco shell that touched the floor. This blog reporter is not able to confirm or deny the truthfulness of this allegation.

B and I packed with Cappy in his truck for the shuttle home. On the way he delivered a poignant study in the wasteful excesses of automobile operation, when he pointed out that the $10 of gas we put into the engine was insufficient to fuel the round trip. So we stopped at the Valero to properly cover costs, and provide me with an easy drop off.
Posted by nocar at 9:53 AM 3 comments: Links to this post

Is it SSFT3 in Italy Yet?

We are all anxiously awaiting the qued up post from afar, something about demons, sounds exciting. Alas, it may not be Tuesday in Italy yet, so I offer this lame ass post to get your Tuesday going.

Get out 'yer sweet rigs. Let's go ride. Better make it a single speed, and a handmade one if you got one. Perfect Spring weather awaits.

ONE, Handmade in USA 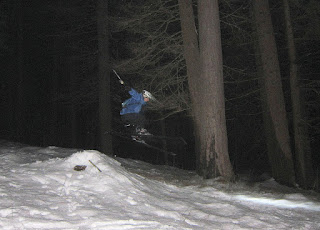 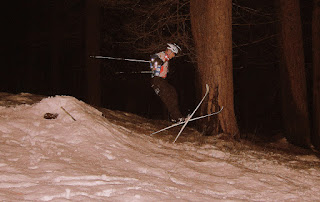