Land of the long, long ride

Long ago the Maori dubbed New Zealand the "Land of the long white cloud". Now, whether this was a referent to the weather in that particular part of the world, or to the infiltration of a host of Europeans to those tiny islands, we may never know. I'm of the mind that it had to do with a mix of cloudy weather in the north, and the sunny, but snow-packed spine running down the south. And I'd also like to think those good islanders saw the value of single track, and began in earnest to carve out the thousands of miles of trails that adorn NZ, perhaps divining the invention of a certain two-wheeled contraption one day.

I was thinking of that "land" en route to Polly last night. Aside from it being at the bottom of the world, and possessing a fraction of the population here in CA alone, they are quite similar. We have our rainy north, sunny south, and the snow-capped Sierra spine that our own B has religiously covered over the last decade. Our forebears carved trails for mining, mail, or general transport from the East. We are equally littered with fine single track, and only a rare few truly exploit it.

As I rolled up into the pines amidst fading light, I thought about the legacy of the greater Polly-Strawberry-Tahoe-KW complex, and more importantly, our role as explorers. In some form or other, FT3 has covered more miles, more long rides on their bikes than our ancestors did in search of food, shelter, or treasure. In fact, some of our longer rides have resulted in the urgent search for the first two, and many have ended with the treasure that is Black Butte Porter.

To that end, I decided our little patch of God's green should be dubbed the "Land of the long, long, ride". Whether it's B's SB-KW route (including the infamous 3 day tour with extension), any trip down the XP, the often metric century Sunday rides, any ride up ME to Tahoe via KW, or Cappy's tuesday alternative (and always dynamic) Ptown to Cronin loop, these are not for the faint of heart. After nearly 6 months off the bike, my little roll-up for tacos may have felt like a long ride at times. In fact, it was simply a reminder that, after being KWalified, I have a long, long, way to go.

Cheers to all for the tacos, beers, applause, and a ride home. Know that it was good to be back among members of the pithy.  As for the business of a RR, I'll leave that for some co-opting blogger to fill in. I can only say I appreciated THTH's attempts to long-taco us into the evening, despite getting shut down by The Mother and her cub. First time I've seen a pay-session sans beverage. Apparently, I've been away too long.

Posted by Counselman at 10:18 AM 3 comments: Links to this post

Cowbells at the Top

This blog would be remiss if it didn't recognize the awesome showing of FT3 rider Councilman who bright at least three generations of family members to the summit of the Mosquito Climb at Union Mine Road to greet Mother Lode Century Cyclists with iPhone Cowbells and cheers. Proper young man, proper. It is also amazing that you have taught your oldest son to speak Italian. Next thing you know he will be renaming the cat. It is notable that the gesture is receiving accolades via the Mother Lode Century Facebook page. This gesture may have been the only supportive gesture from locals out there, as, not surprisingly, there have been reports of other locals being a tad less welcoming. Alas, FT3 makes its mark!! The Century went well - Green Fro and I were the only FT3ers who participated. Rock God, a.k.a. Motomaniac opted for a moto ride and Safety, who expressed interest, went deep at a bachelor party. A friend and legend from the other side of the river over in Auburn, B Rouse, joined us to set a scorching pace up all climbs. One of Green Fro's road crew out of Folsom joined us as well for a while, but opted to call it a day early because he had raced on Saturday. He also managed to melt and destroy his super sweet carbon easton rear rim while decending Prospector on the way back to Coloma. In typical Velo Loco fashion no sign went uncontested. True some of them were more enthusiastic than others, but the competition was legit nonetheless. Green Fro and I took a sweet dirt route back into Coloma, something we can tack onto the Pville-Cronin-Salmon Falls - El Dorado Trail epic if it ever happens. AND... I happened to notice that our own Bambi took 8th out of 65 in the 2012 Silver State 50 mile run. 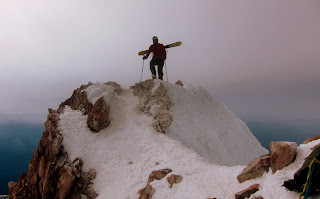 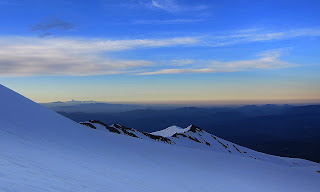 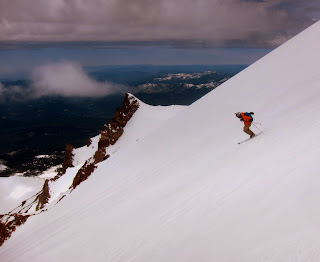 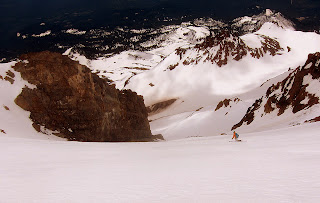 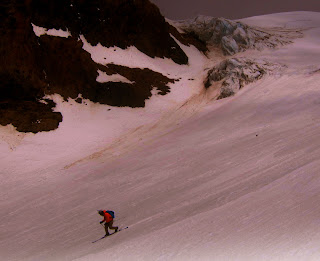 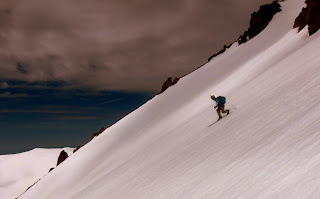 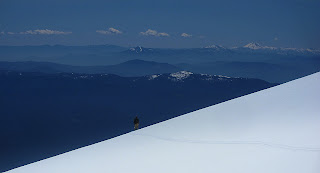 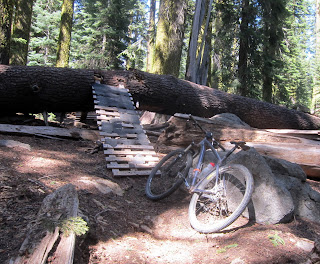 Tis the Season to be a Cyclist

Hola compadres de FT3. I hope this Tuesday finds you well and happy with sore legs that are ready for another pounding. 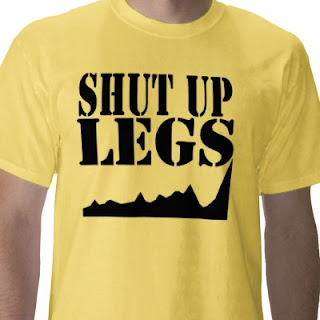 The combination of excellent weather and trail conditions is not to be missed. The Tour of California has begun, the Motherlode Century is this weekend, BMX is happening every weekend, plans are being made for epic adventure's...'tis the season to be un cycliste'!! Since I cannot make tonight's ride (working...) I would like to use this call out to see if there is any interest in doing the epic Coloma - El Dorado Hills - El Dorado Trail loop this Friday night??? Green Fro and I are in so far, any other takers?? Start time will be 5:15pm at the Mosquito lot and finish time is TBD! 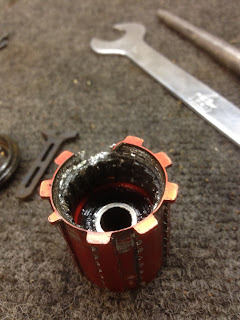 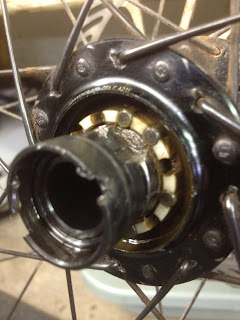 After making painfully last minute adjustments to the shuttle meeting time and location, B, RG and I rolled past the Mosquito Lot to receive our ride blessing from Safety and were enroute at 5:45. 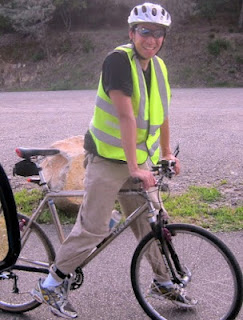 Rock was clearly nervous to be back amongst his mtn biking brethren; fussing with his gear and making excuses before we even got under way. 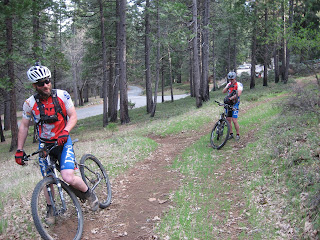 After a quick climb up the Qualifier, he found his legs and disappeared down the Wedding March. B and I, having flashbacks of other outings when RG raced off the front
http://fattiretacotuesday.blogspot.com/2012/02/there-is-no-god.html
were startled to come around a fast corner and find RG on the side of the trail in a fit of annoyance. He thought he had flatted and was inspecting his bike. 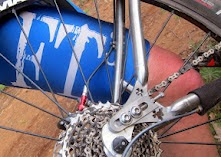 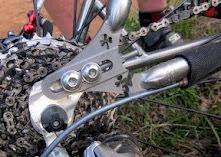 We strapped the frame snugly enough that he could soft pedal, and RG made a solo breakaway for the Knott Hole. B and I made no effort to contest his Long Taco ambitions and rode circuits on the Rock Garden.

Not wanting to abandon our shuttle driver, we soon returned to the Knott and settled in for our own long taco session.

I thought for a moment that the sauce was causing me to hallucinate, an apparition appeared in the doorway. I squinted, not believing my eyes, but it was true. Ghostrider. With Ghost at the taco table the conversation swayed from inexpensive entertainment enjoyed by sailors at liberty to expensive bike parts enjoyed by roadies with sponsors.

And then Cappy and Xteric showed up, and the tacos continued...
Posted by nocar at 11:44 AM 1 comment: Links to this post

Spring is creeping up from the valley. Yesterday, B and I enjoyed a ride through verdant splendor: wildflowers burst onto the trail, we threshed though top tube high grass, and felt the gentle caress of poison oak dragging across our skin. 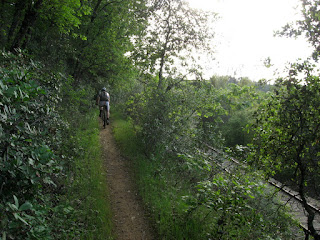 Conditions should be perfect tonight. So good, in fact, that RG may step away from his road bike and join us on the single track. That's what he said last week anyway.

RG: Damn, you guys are having too much fun without me. I'm committing to an early ONE! for next week.