A new rider presented himself at the Knott lott last Tuesday. He showed a sincere enthusiasm for preBRs and had no problem completing the Qualifier within regulation time. His bicycle was dated, to say the least, and its worthiness decreased as the night progressed. The loose rear shock, bottom bracket, and rear hub all conspired against the drive train and after much mashing of gears one of the derailleur pulleys blew apart. He survived to tacos, but his woefully unmaintained ride earned him the Taco Handle Haggard. The fellow is a foreign national, the first in FT3 that I'm aware. Perhaps he'll come back.

Sadly, we must acknowledge the passing of an institution, the TS 100 is no more. This merited just a parenthetical clause in an email heavy with exclamation points, as Mr. Northey tries to sell his new venue. 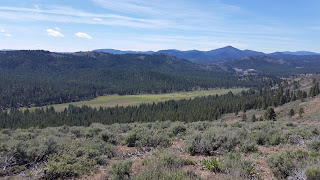 He's lining out a free 8 hour race for anyone interested.
Posted by nocar at 9:18 PM 10 comments: Links to this post

My memory of last Tuesday is as indeterminate as this photo. 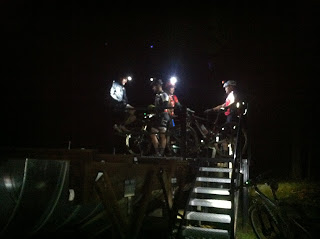 I do recall some brush crashing as we pioneered the NE corner of Pollywood. 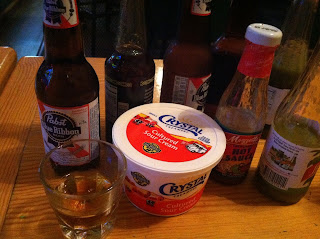 At the taco table, the conversation quickly turned to the upcoming LRP -The Fro Ho Down. The first question wasn't how many miles, or will there be water, but will we be playing basketball afterwards.

After a warm up roll from Fro's house, the first big climb of the day was a bruising 800 feet ascent over 0.8 mile on loose gullied single track. XT cleaned, but I rode it faster, you decide who won. We followed that to another climb that according to the hand written note on the sign was the hardest trail out there. 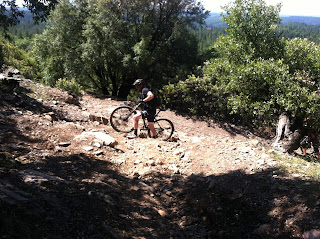 And so went the day, red line climbs followed by white knuckle descents as we made a counter clockwise loop through the Rock Creek OHV area on trails 1, 4, 9, and 3. 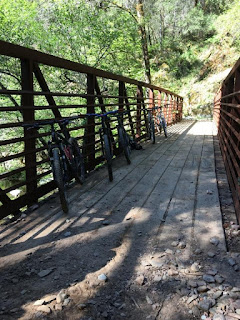 The most important ride is always the one that happens next, and that’s tonight.
ONE
Posted by nocar at 10:05 AM 6 comments: Links to this post

Another Tuesday of glorious supremo conditions. Pity those who can't make it.

One forgivable reason for absence is if a rider chooses to spend the evening preparing his meat for the Fro Hoe Down.

Currently three are committed to Sunday's ride, and others have made positive noises on the aft channel, though Newb may not bring his meat.
Posted by nocar at 9:20 AM 15 comments: Links to this post

Now You Say It

The party started early, with Orphan driving up in the Euro van, picking up riders along the way. With surprise appearances from Spawn and Partial Credit, our ranks swelled to eight riders.
The denizens of Strava will note our circuitous route that maximized sweet downhills. Newb cursed his SS the whole way.

True to his handle, PC left before tacos. Spawn also departed early, but in a grand gesture before he left he grabbed the bottle of rye from behind the bar and liberally poured shots. On top of that we ate up the cheesy chili and chips and cooled the hot sauces with dollops of sour cream.


The first official 2016 FT3 LRP is calendared for April 17. 8am rollout from Fro's house. He decided that the tires were too skinny on the last ride he produced, so this one will stick to the steep and loose trails of the Rock Creek OHV area.
Posted by nocar at 8:16 PM 6 comments: Links to this post