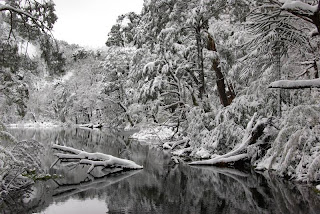 Last Tuesday, we found ourselves locked in the firm grip of winter. As Spawn reported, the lake trails were 95% covered in snow to a depth of 6 inches in places. So with Pollywood out of the picture, many FT3ers were left scratching their heads (or some other area of the body) and pondering the question, "Now what?"

Historically, riders have been known to enact 'Plan B' when faced with similar circumstances. But due to illness, absence, obligations, and maybe even plain common sense, even the P'ville 'steeps' tour failed to take hold. Clearly, this is for the best, as the local roads were downright treacherous. Even the bike path was covered in snow and ice.

I, for one, opted to work out my frustration on the stationary trainer, which provided ample frustrations of its own. Even my greatest efforts at the pedals seemed to be getting me nowhere. I'd had enough of the nonsense after only about 40 minutes; hardly even qualifying as a ride in normal circumstances.

But let's not dwell on the past. A new day has dawned, providing evidence for the fact that the world is still turning on its axis, despite a Tuesday going by with no FT3. Let's not allow it to happen again, though. Best not take any chances.

The snow is melting, and credible sources have indicated that the trails will be in ride-able condition come Tuesday night. There will be snow, yes, and there will be mud. Bring your fancy shoe covers if you wish. Bring your fenders if you're allergic to dirt. But be there, oh yes . . . be there.

By the way: where were you last Tuesday night? Comment in the thread . . .
Posted by partial credit at 4:35 PM