Fun was had by three riders - ehm, sliders - last Tuesday. With a relatively early start, Nocar, UL, and PC slid out the Qualifier, navigated a couple downed trees, then zigged down a snow-frosted hill. Not exactly earning turns, unless you call a full-stop one-hundred-eighty-degree step turn a 'turn'. That and ass over tea kettle. (Actually, Nocar managed some carving turns; I'm just speaking for myself). 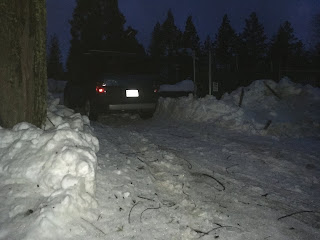 The Knot lot, reduced to a single parking space. 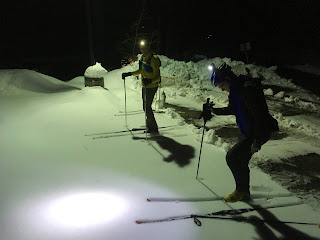 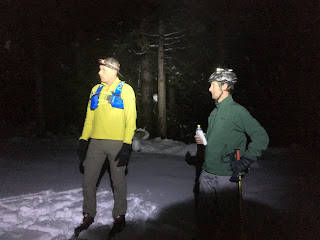 Some wore bike helmets, another wore a running vest. What the hell is going on here?

Having been warned of a firm 8:30 taco deadline that night due to snow-induced transportation issues, the three returned to the Knot Hole promptly at 8 and change. Too early! The bar was full with eaters and drinkers; Trainwreck was only half drunk. Tacos were phat!

In the meantime, rain melted some of all that snow. Then it snowed again, and we're back to a nice 48" snowpack. If you want to ride, give Cappy a call. Unless Cappy is feeling like some snow play?