There may be hills, the earth is not flat 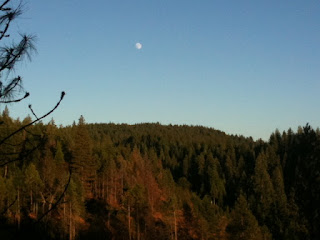 Happy as a schoolie on the first day of classes, I rushed to the Mosquito Lot for the meet up. Councilman fielded phone calls and counted riders, trying to minimize drivers in spite of Cap'n's threat that he may short taco.

We assembled as 8 at the Knott Lot, and received a send off from NoHandle and Mrs., who were enjoying an evening of childless bliss. Cappy repeated, "where should we ride tonight?" When he heard the suggestion of Cappy's cache, his eyes twinkled eagerly and we headed out the back to the horse trail drop below the dam and up to MET. At this early juncture we had a first incident of Too-far-off-the-back-to-see-the-pack and our ride leader took the necessary precaution of reminding all of proper etiquette.

We followed the trails nearest MET. At the top of the downhiller run (Chiquita banana) we waited for stragglers and B passed around snacks. On to the top of the lips, then we hit the road. Cappy gave a callout to grab a wheel. Those who knew what was following quickly lined up. Others were promptly dropped as the paceline picked up speed. At one point Bambi made a textbook attack, but the ride leader was not to be drawn in to such antics and maintained his pace at the front of the line. Regrouping at the turn-off onto dirt, a couple riders rolled back to check on the last rider and avoid becoming mosquito bait. All-in we sped down the dusty logging road and then churned up the steep gravely pitch on the other side. At the top of this climb Cappy made a clever wrong turn, giving the front of the pack a little out and back as a delay tactic.

The exhilaration of the cache can not be overstated. The trail keeps getting narrower and steeper, and then, around a sudden corner, it drops over an uncompromising rock face. Bambi had to ride the last bit twice. It's that fun. At the end of the trail we burst into a campsite. The campers thought they were at the end of the road, and their eyes just about popped when they saw our whole peleton emerge from the woods.

Bonetti to MET to the top of the lips, where I got to cathartically retrace the route where I performed my non-compliant dismount, so many weeks ago. Not satisfied that all the lessons of that trail had been learned, we then did a full lip loop. Back at the lake, we heard that Peter might show up if we rode too much longer. So back towards tacos, hitting the horse trails for good measure, and pointing out our "ripped calves" as we "danced on the pedals" the whole way.
We picked up the last bit of trail around the lake, and stopped for a refreshing dip. Bambi, dreading the alarm clock, headed for bed. EID patrol rolled up, politely dimming his lights and not exposing the swimmers. We were in a day-use area, and it was no longer day time. With no intention of lingering, we headed for the much anticipated taco session. 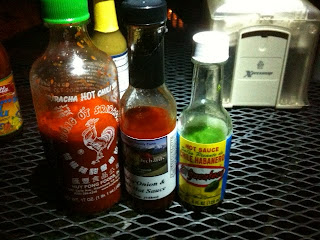 The fire crackled, the meat dripped grease, the taco bitties mercilessly teased B, and the scouts (OT and T2) earned Knott Hole t-shirts.
Posted by nocar at 8:45 AM