There will be flats, the earth is not soft

Councilman and Rock God oversaw the careful packing of five men, five bikes and one dog into their vehicles (ensuring that every rotor was safe) and we headed for the Knott Lot. We met Lars, who bashfully admitted that he wouldn't mind choosing the route. After a short discussion about the current location of SPI logging activities, Our Dear Ride Leader declared that he felt like he had been gone for so long that he needed to requalify -so off we went. 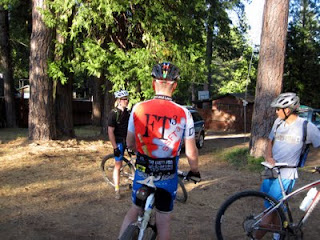 Just past the gate to the boy scout camp, we rolled up on two spotters walking dogs. "It's the Tuesday night bicycle ride," they called us out. "We've been running into you guys for years."

A fast qualifier run left Rock God wondering if he was going to lose his membership. But, all those fish tacos and beers helped pull him downhill, for as soon as we turned down the chopping block he was fighting for the front. 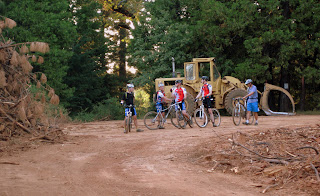 We took the canal frontage road and the steady climb up to Park Creek Road. The steep and rocky descent of Park Creek Road supplied plenty of action. Councilman ricocheted from one side of the road to the other, his rear wheel almost getting ahead of his front. 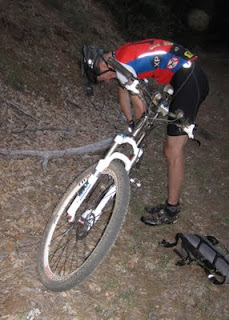 When we turned down Barnes Back RG burped his tire and we stopped for an air up. Shortly thereafter, C-man had to stop and futz with his tire. After airing and spinning he finally said "let's just roll it," and that did the trick. Not to be outdone, moments later LOtB's tire went flat. He wrestled it off the rim, to reveal a pretty nasty puncture. He used a bar wrapper to boot it and gu for adhesive. Meanwhile the tube was patched. When the tube didn't hold air, B took the tire off the rim to inspect for secondary punctures. His fingers encountered the sticky mess at the boot site and he exclaimed, "You used gu for this? That's food!" We stood around for lord knows how long, swatting at mosquitoes and getting cold, before the flat was repaired. If only expert field mechanic NH could have been there to take charge of the repair. Alas, he was too busy embrocating his hiking boots. 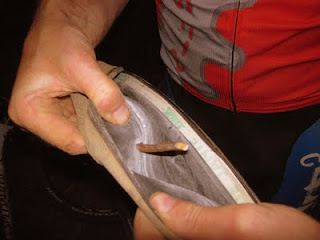 Back on our bikes we rolled the lake CCW, dashing through the busy camp grounds. Tension was high as various tires weren't maintaining pressure. But, we made it back to the Knott Lot without further incident.

T2 joined us at the taco session. Some aces turned up, the tacos left only a slight sheen of grease on the wax paper and Rock offered some tropical sauces to the table. 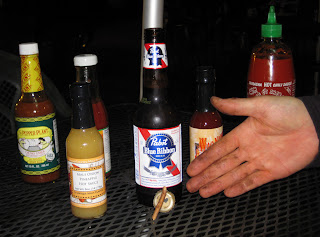 B and Councilman are planning an all Friday dirt outing for anyone looking for an epic adventure. A repeat of Cap'n's commemorative ride is possible, or exploring around Barrett jeep trail. Who is in?
Posted by nocar at 8:36 AM