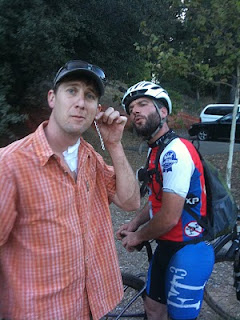 With all the anticipation of prom night, or perhaps the release of the latest iPhone, B, Safety and I, your councilman, hastened to the Mosquito lot. We were looking forward to a visit with our resident man of steel (Ti, really), NoCar. We were greeted by the entire NoCar family, and treated to a first look at the hardware. It did Knott disappoint. Ideas abounded as to it's next incarnation; Jewelry? Brake mount? Utility bar under seat rails? Only time will tell, but I'll bet a patent is in the works. 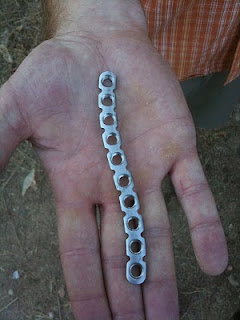 We soon parted ways and headed up to the Knott. We were met by NoHandle, Bambi, and Xteric. After some deliberation over ride leader, with plenty of Not It's thrown out, your councilman reluctantly took the helm. I say reluctantly only because 2 weeks of academia and beer consumption did not portend a lively ride. Turns out I was wrong, sort of.
Our route included backdoor to roadkill, then the frontage trail along Sly Park Rd to the Forest Service cabins, then B's chin down to unnamed trail leading back up to spillway and up to MET. From there we crossed the road and took the short ST up past the group campgrounds, and that's when the ride went flat, literally. Bambi suffered a rear puncture, apparently due to a large chunk of glass. We were treated to a race worthy change out, and a colorful lesson on *proper stroke count and pumping effort when filling the tube. Once rectified, we set out for a counterclockwise tour of Fleming. 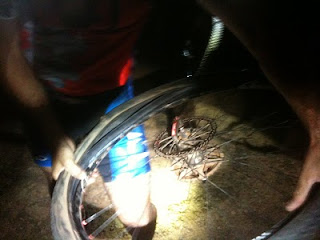 Only minutes in, and just past Palin's, we experienced Flat 2, the redux. This resulted in further discussion, a loaner tube (a cx tube, I believe, or one of those fancy latex, ribbed versions, *see above), and THEN we were off. The pace was brisk as we ascended Fleming and then railed the downs. For good measure, and because B was still recovering from a cold, 8b was thrown in. The descent was wild and fast, and after a quick refueling, we climbed out. The CCW tour continued and 8a was considered. We decided against Redneck, dropped back down to complete Fleming, and then plunged a rather dry and loose Palin's. The hour was late and tacos were calling, so off we went to find our birthday boy, Cap'n. He opted for a late road roll up, and we didn't want to keep him or Mother waiting. 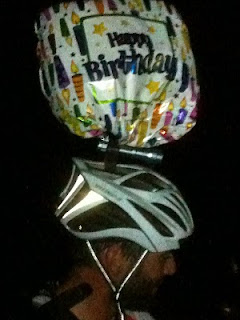 Tacos were accompanied by grimaces and strong body language behind the counter. We were again late, and holding up the show. Birthday boy arrived not long after orders went in, and he was treated to a birthday round. The tacos themselves were rich and meaty, though sauce selection was limited. Cap'n was all but ignored when attempting a late 2 taco add. At this point, the taco bitty went postal and threw out the "you guys are ..icks" comment. Chaos ensued, and feelings were hurt. As a would be counselor, I attempted to bring both sides together, and over several pay beers, relationships were mended. We agreed to show up all winter and provide income, the bitty promised not to defile our food. Peace was restored to pollywood.
As we loaded up for the ride home, B challenged Cap'n to ride back to P town by way of a Pino stop. Cap'n took the bait and off they went up Sly Park Rd. As a sag wagon, I made a fuel stop and then met them shortly thereafter for a b-day nightcap. The Pino offered it's usual cast of characters. A robust young lass with a small dog chatted us up, with questions related to whether we were coming from, or heading up to, Tahoe. It's comforting to know that she wasn't far off; FT3 has and will continue to launch such long rides, even under the cover of night.
Cap'n and I bid our LRP comrade goodnight and headed for the 'squito lot. As rides go, it was short and "flat", but it's always better than a day at work, surgery to get hardware removed, or being run over by a lunatic. Count your blessings, brothers.
Until next time...
Posted by Counselman at 9:02 AM