In spite of in depth discussions at recent FT3 rides that set in motion plans for an Epic celebration of the 2012 Mardi Gras event, last night's FT3 went down just like a typical FT3. Like every FT3 however, there were a few notable occurances and incidents, hence this ride report. Most notable was the second occurance of a phenomenon that may need it's own "sniglet." This sniglet would be definined as follows; "when an FT3 rider shows up to the Mosquito lot ready to ride, and then for some unforseen or uncontemplated circumstance, has to depart the Mosquito lot and not do the ride." To date this phenomenon has only occured on two occasions. This is not to be confused with the 'send off' which is where a rider knows and blatently states they are not going to ride, but shows up at the Mosquito parking lot to say "hello and have a good ride" to fellow FT3 members. This phenomenon is quite the opposite. In case you do not know what a "sniglet" is, I offer the following short.

Xteric and Golden Spoke Bike shop were extremely helpful in supporting the introduction of the new S/S 29 C-dale bike into the FT3 fold. There were some last minute problems with a bent crank arm and both Xteric and the Godfather came through in a pinch at 5:38p.m. However, the extra time afforded one rider just enough 'contemplation' to result in the above referenced phenomenon. Once Xteric and I arrived at the Knott Lot we were met by NoHandle, Rock God and Bambi. To our surprise, no B. It being Phat Tuesday and all, we thought there might be a hurricance brewing. Alas, we suited up, as usual, shared some excitement about the new S/S 29 C-Dale and Bambi's new super sweet Tang Niner S/S ....then off we went. We took the backdoor trail to roadkill and then dropped Bs chin where Rock God dropped himself off his bike for a bit of 'ground time.' Apparently, I, upon a new bike and designated ride leader, was riding too slow and careful for his super highly trained mad moto skillz. Bambi was bitching at me too, but, I managed too keep my cool and not retaliate. At the Knott table it was said that NoHandle was in front of me, but i didn't notice. Nor did I badger. Once Rock was upright, we headed for a Fleming counter-clockwise loop. There was much chatter as is typical when Bambi is present. We overheated in the 70 degree weather. The Fleming drop was extremely fun and, for those who weren't there, the trail conditions were primo. Best conditions ever. Really, never better. And that is why Rock God was riding on the edge. He hit an unexpected mudhole and took his 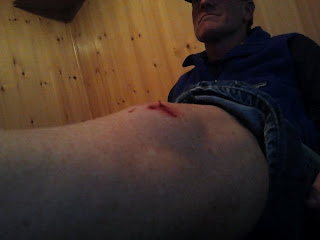 second bit of 'ground time.' Fortunately he didn't fall on the stumpo we all thought he hit. He was shaken but not sturred and sprouted this huge lump on his leg.


It is notable here that Peter Pissy Pants did not come on the scene and Rock HTFU'd in a big way and finished the ride without complaint. Good on 'ya mate.

We then went up Redneck rising and Bambi and I marvelled at our excellent S/S gear selection while discussing important topics about bikes. We dropped the Right lip and then did a counter clockwise lake loop. The 18 mile ride resulted in red lights and Bambi's even died.

We enjoyed our tacos, Habi Pepper Plant, a new Tiger Sauce and the Garlic pain. A tired and unenthused (but ever ready) B showed up for the taco part. I don't even think he had some rye.

We rolled quitely out of the Knott in a timely departure. Another awesome FT3 in the books.