The mood was businesslike, "are you wearing a base layer and a vest?" as we kitted up in the knott lot. Spawn was hardened from winters commuting in Salt Lake City, and was comfortable in knickers and a long sleeve jersey. Xteric tried out the new clear jacket. All assembled, Lars allowed as how he had a few new trails in mind to explore, and we relaxed into following our Dear Ride Leader.

Quick down to the Lake, then right to MET, maneuvering to the stealthy trail between the equestrian parking lot and Ferrari Mill. Fleming CW, sneaking left on a hand cut fire line to Blue Gouge Mine Rd, continue CW to the next new trail which dropped precipitously, briefly and then was a steep and long hike up. Continuing CW, the pace furious towards the Fleming high point. (Later Newb guessed the fast pace was a consequence of RG's pressure on the Ride Leader. RG explained his energy was the old NoHandle trick of coming over-rested then blowing out his legs with no concern for tomorrow.) After Lars demonstrated a balletic no-speed crash, we launched into the long descent to the base of the second dam. After climbing back to MET, the remainder of the ride was thrown into the air. Lars abandoned (or made a display of abandoning, at least) Ride Leadership. RG asked the time, and it was only 8 o'clock. Newb and Xteric petitioned a climb out B's Chin. But, ignoring Newb's howls, we turn towards tacos.

There was some surprise at the Knott hole when we arrived. Chickenbake even had to warn us that she had made Chickenbake, thinking we would especially enjoy it after a cold evening of riding, but we were so early it was still in the oven. No one minded having to wait. Meanwhile Xteric made a sauce offering. He assumed it would be a sweet sauce as the ingredient list started with apple sauce. But, it contained chili extract, not chilis, and its eruptive heat pushed a few outside of their sauce comfort zones. We attacked the Chickenbake with relish. Although we didn't quite finish the pan. 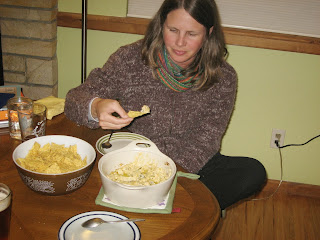