AND THE RAIN HAS FALLEN!

Like the pitter patter of little foot steps, there was a  steady rain at the homestead from noon on Sunday until the evening last night.  And as with the pitter patter of tiny foot steps, this rain also filled my heart with joy.  As each millimeter fell, the forest relaxed just a little bit more.  Mist and fog rolled in resetting trail conditions to awesome.  And now that the mist and fog has rolled out, it's time for us to start rolling in on our 29er (and one 27.5) wheels.  Times a changed too, so now we enter a period of darkness - bring your reflectors.

Last week was awesome.  There were five very happy riders that shredded the trails with glee.  No Car, No Handle, Buttons, Will and myself were able to have a grand time out there, even with limited numbers.  We were able to tackle 3k feet of climbing as Cappy had requested, but fell short on the 20 miles and no ones light died (sorry Cappy).  However, while short on requested mileage we were still able to pull a coveted 8a drop and a full lip service (down Up Skid/Skid Row, up Right Lip, Down Left Lip Revised).  Tacos were served in the old fashion, every man for himself.  Mother Rye said she was done with it all, and so did Courtney (who managed to get Spawn to watch the wee one so she could serve us tacos!!!).

Now who's in?
Did it rain enough for Rocking God?
Will Cappy hire a baby sitter?
Is No Car a dad?
Is No Handle going to be out of town?
Is Council Man sick?
Is Xteric fixing downed lines?
Will Spawn ride and eat tacos?
Is Buttons going to get a new light to save on duct tape?
Will Green Fro lube his chain?


Update from the CX world last week by Cappy.

Two weeks ago I took a glorious 35+ A 2nd place podium at the Truckee Bike Park CX race put on by Reno's Sagebrush Cyclocorss series. 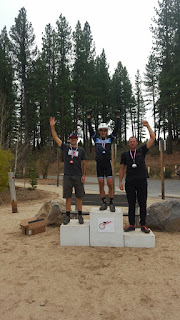 Wednesday night's Final RodeoCross was packed with revelry. While I had every intention of being deeply involved in revelry from the get go, things changed a bit when one, then two top contenders fell out of the lead and I found myself off the front. A win in an A race is hard to come by, so the hand ups were passed on for consistent and smooth racing. I had the lead, the win in my sights... and Katerina Nash was present too, in the mix behind with the Women A's. If I had been 'chicked' by her my win would be nearly wiped clean, so I continued to hammer all the way to the line. While I did raise my arms in glory across the line, the photographers were more interested in funny costumes than racer's glory, as the spectators of heckle hollow were clear to let me know - I was taking things 'too serious.' Seriously though, for me that was the win of race of the year.

On to Sac Cyclocrss Double header in Folsom this past weekend - Race #1 appeared to be the better race for me to attend based on family commitments etc. In spite of the fact that the course was less desirable, it was a hot day, and my legs were less ready that they would have been for the Sunday race, I toed the line on Saturday. This time I opted to jump in with the Open "Elite A" men, to see how I should fair with the areas top contenders, both young and old(er). I made the switch because the 35+ A group has been meager of late and Saturday was no different, there were 6 racers, two of whom dropped out, and based on my 15th place finish time in the "Elite A" category I would have finished fifth in the 35 A class, which is basically last since  two dudes dropped out...And of course it rained on Sunday, so my handling skills would have been helpful, but I was wiped out and there was no way it would have been a good idea to attempt to tow the line, so no racing Sunday. Hopefully there will be some more foul weather races later this year.

So with only Bay Area races and Sac CX races remaining, I will continue the year as pack fodder for the region's strongest racers. Maybe one of you will join me some time... uh hem, Race Ready Rock God, let's do this!!