A crew of five riders assembled in the Knot lot. We all admired the new decorative rock that EID had placed at the entrance. Rock God is back from the Betty Ford clinic, and was ready to, well, rock. He and Cap'n burst from the Lot onto the backdoor trail like two anxious race horses out of the gate; leaving Xteric to finish assembling his lighting and hydration system. Where the backdoor trail drops onto the road, RG executed a graceful drop, staying on the road's shoulder. All the same, an oversized pick-up made a squealing skid, to remind RG that the life of a cyclist is cheap in El Dorado. We descended, crossed the spillway and made for a fast Fleming ascent. Someone had done some log cutting on Fleming and it is in Top form. Up Redneck Rising and down the Lip with several new downed-tree-ride-arounds. At the lake, B flipped over his troubled steed and demonstrated how he could now simultaneously hold the wheel tight and pedal. The working theory being that he had sheered the pawls. 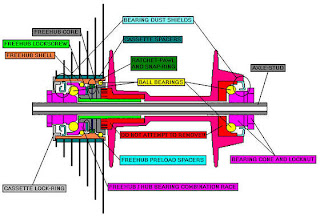 We dug through RG's bag of useful things and found his tow strap. We tied one end to my seat post and the other to B's stem. Certainly if NoHandle were present the system would have been improved, but it seemed workable. After a little practice where I learned to modulate power, and B learned to handle the breaking, we started to maintain speed. Communication was key, with B sounding off like a musher for more power or warning of a sudden tension loading. We had a few comic mishaps when rounding tight corners, but made it through the single track without any big spills. Once on the asphalt we organized as a team with Xteric and Rock grabbing the tow strap to help carry the load. As B became more comfortable in the back he demonstrated some of his water skiing skillz, cutting back and forth trying to make himself as much of a burden as possible and laughing all the way.
Mother Rye was worked up when we reached the Knot Hole. She has been engaging attorneys to fight for the preservation of our parking space which EID desperately wants to close. When she finished filling us in on the news she put on the ball game and cooked up some fine tacos. Xteric made the unusual proclamation that Barnes Back should be removed from the FT3 trail lexicon. His proposal met solid opposition.
I'm sure those unfortunate souls who missed the ride are filled with woe. All except NoHandle, who, according to unsubstantiated rumors, enjoyed a delightfully naughty pillow fight with Peter.