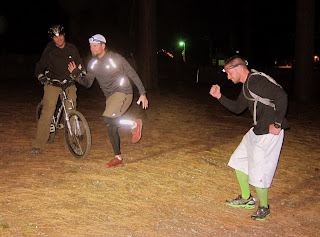 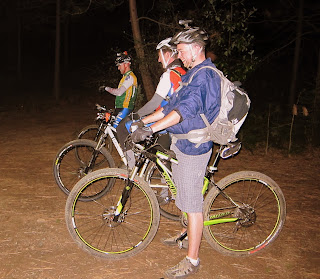 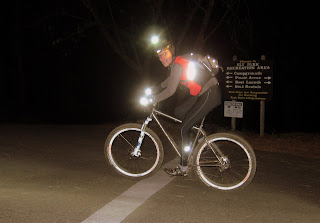 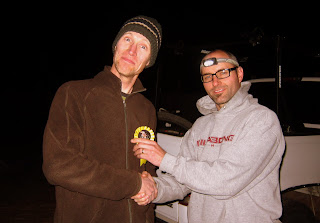 A ride went off as is the ordinary last night. In addition to six riders, two runners and a support bike, headed off into the unseasonably dry and mild conditions. Upon bikes, Cap’n, B, NoCar, T2, Councilman, and Lars “found” the trails slick with needles but fast. The runners Xterric and Ace (newbie) were escorted around the lake by Keds. A few rarely taken trails were sniffed out and found yielding a 50% return on the hunt. Sneaky Scouts offers a great albeit short connection from the picnic table area to the Qualifier, while Bushwacked had been thwarted by some entity trying to minimize impact. The trail discussion had an air of revolution. In an attempt to retain control, I admit I had to use ride leadership as a bully pulpit to ward off the attacks. Fearing a second week of coup attempts, I felt lifting the pace and hitting some “proper” trails may keep the revolt at bay. The combo of horse trails, #8 drop from Ferrari Mill, Palin’s, and Blair Witch provided the tentative stability needed to return to tacos while retaining office. With the sense of protest and revolution still in the air, palatably lingering even above the burn of the hot sauce, there then proceeded talk of name change. The observation the T2 had been a bit more consistent than T1 prompted the call to remove the primary “1” from T1 and give that to T2, thus properly ordering the T’s in level of commitment to the ride…did ya follow that? Sensing the disturbance in the force as any good Jedi will, who should walk in the door, in order to defend his name? The real and only T1! Might I add wearing a pretty darn classy G Spoke Carhart jacket…do I sense the need for a team set of jackets? Thus with order mildly restored, and using the very civil Roberts Rules procedures a few important decisions regarding future rides were made (see end of post for dates and times). Thus the ride ended…however, feelings of revolution are only ever temporarily put to rest, the current is there, will the Arab Spring give way to the Pollywood Winter? Great, now we will all need to get Twitter accounts so we can follow the happenings!
With some of the quorum departing for pilgrimages to the birth place of cycling, and the air of unrest, and having not plagiarized in some time, I feel it time for a bit of a sermon…Apologies to Jonathan Edwards for the destruction of his sermon, but here goes.
Mt. Bikers in the Hands of an Angry FT3
We find it easy to tread on and crush, like I do on the Sunday ride, a worm that we see crawling on the earth; so it is easy for us to cut or singe a slender thread that any thing hangs by; thus easy is it for FT3 when they please to cast lesser riders off the back…
Those lesser riders are now the object of that very same screw tightening and hammering of FT3, that is expressed in the same torments of being dropped way off the back. And the reason why those riders aren’t always pedaling squares is not because FT3, in whose power they are in, is not very angry with them, as angry as FT3 is with many miserable roadies and hipsters currently pedaling squares, who feel and bear the fierceness of FT3’s wrath. Yea, FT3 is a great deal more willing to drop the great numbers that are now on earth, yea, doubtless with many that are now riding bikes, who it may be are soft pedaling, than FT3 is with many of those who we have already blown up and left gasping on the climb behind us.
So that it is not because FT3 is unmindful of their baggy shorts and flat pedals, and does not resent it, that FT3 does not let loose a blistering attack and cut them off. FT3 is not altogether such a “recreationalist” as they are, though they may imagine us to be so. The wrath of FT3 burns against them, their lack of fitness does not improve, the sweep vehicle is prepared, the searing attack made ready, the legs are a burning rage and glowing. The glittering sword is whet, and held over them, the attack hath opened its mouth under them…
Unfit cyclist ride over the pain cave on rusty sprockets and chains, and there are innumerable places in this covering so weak that they will not bear the weight of an unfit cyclist, and these places are not seen. The launch of an attack goes unnoticed at noonday; the most alert rider cannot discern the change in pace until too late. FT3 has so many unsearchable ways of dropping unfit cyclist out of the world and sending them back to pedaling squares, that there is nothing to make it appear that FT3 had need to be at the expense of EPO or go out of the ordinary course of the training plan to destroy any unfit cyclist at any moment…
Amen
Rides:
Friday 1/6/2012 South Fork Double Cross: Roll out at 10:00 (Firm) at the Mos Lot. 9:30 for Coffee at Cap’n’s if the offer holds?
Sunday 1/8 or 15/2012 Winter crossing of Strawberry Kirkwood…I am a go for either Sunday, which one works better?
Posted by nocar at 10:26 AM