Taking on the Old Caz 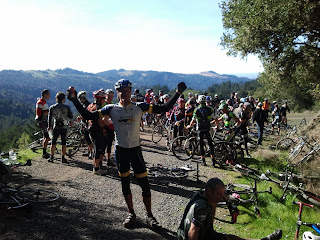 It's the last Tuesday of the month and the last day of the month, that's gotta mean something. When you figure it out let me know. Tuesday nonetheless and time for another awesome ride with perfect January(?) weather.

Quick weekend report, while NoHandle sought friends to ride with and while R.G. took in some coastal views, long lost FT3er's Ghost, Green Fro and your own Cappy took on the Grasshopper Adventures "Old Caz" Cross "training ride." I will skip the part about how Green Fro spilled an entire cup of coffee on the seat of my new race van and get straight to the good stuff. While billed as a training ride, there are in fact posted results, so many people take it pretty seriously. Not sure how serious we were going to take this thing, the three of us lined up toward the mid-back of the 250 or so rider pack. Once the ride began we found ourselves in a massive bike train that must have extended a mile. There wasn't much room, nearly elbow to elbow from the shoulder to the centerline. Green Fro got a little fresh with a rider's wheel in front of him and went down in a flash, not the best way to start a 60ish mile cross ride race(?). Ghost and I soft pedaled for a bit because stopping in that moving mass would have been a bad idea. After a bit we decided that Fro would have some work to do to catch up, groups were starting to form, the pace was picking up and we were headed downhill. The first long decent was all on dirt and provided for some exciting railing on the cross bike. Some dudes were laying it on the line, at that point I lost Ghost too. Tons of passing and being passed was going on at that point. Surprise, to me it was starting to feel like a race. Once at the bottom it was a gravelish roll with lots of puddles in a super fast pack. Good times. Then onto the road for a while. I was in a group of about ten or so riders, of course I found myself on the front doing work to try to snatch up the group in front of us. Shortlythereafter, another bigger group caught us, and Curtis was in there. We hit another dirt climb and that was followed by a sweeet and long decent down to a creek that was flowing pretty well. Thankfully Ghost gave me the hot stuff to rub on my legs so they stayed warm even underwater (I will get to the burning part later). Guess what, more climbing after the decent, on dirt, and that is where I took down a delicious peanut butter, honey and bacon sandwich on a sourdough english muffin. Keeping the energy level in balance proved to be key. There was more riding along a creek now on pavement before we transition back onto some highway riding. Road tactics were in full effect, smart riders sat in. Not me though, I kept finding myself on the front of that group. We made it back to the puddled gravely section previously mentioned and that was the route back home. Up the super long decent, now climb we started with to the finish line at the top. That was when the burning started. Not only did my legs burn from riding, (which I love... "I am a cyclist..." damn those two steep pitches required some deep digging, but they also felt like I had a sunburn. Once the sun hits the legs with the hot stuff on 'em, you really get to enjoy heat.

Results are posted here if you are interested; http://www.grasshopperadventureseries.com/wp-content/uploads/2011/04/Old-Caz1.pdf There were some familiar faces out there, some Sac CX racers, some MTBers from wayyy back, especially a few of the top finishers. Those guys have been at this a long time. FT3 represented well. Beautiful views out there, redwoods, eucaliptis trees and the like. Great stuff. FT3 needs to represent on this one next year. It is soooo worthy.

I hope to be in this week but not sure at this time. Let's start the count off at Zero just in case.