With the surprise appearance of Bambi our ranks swelled to an (un)lucky seven. The threat of rain and the late season caused everyone to bundle. We sped out the back with Cappy in RideLeader. At the top of chin trail, the first descent of the evening, Cap chattered over rocks on a bad line and took a dive. He executed what would be a quality slide into home base, were in not over roots and rocks. Shaken, he let more aggressive downhillers go first. 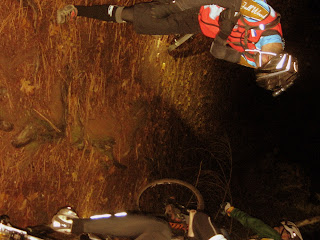 After climbing back up to MET, we snuck into Fleming through Palin’s. By now everyone was sweating heavily and ready for a fashion adjustment. We had plenty of time to consider our wardrobes while Cappy changed a flat. 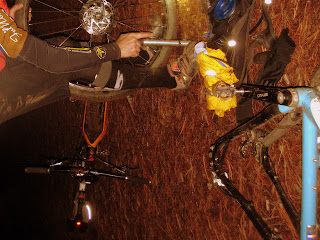 Everyone was in good form, and we climbed Fleming like a team of sled dogs that had been kenneled too long. At the top of Redneck, Lars made a half-hearted attempt to RideLead via telephone. 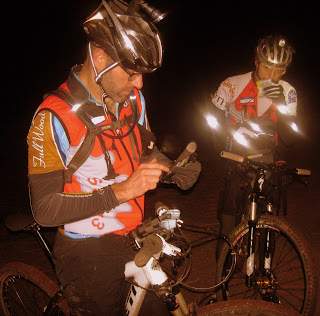 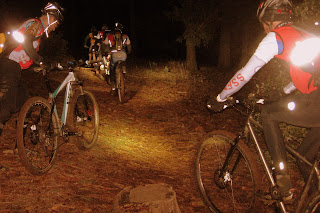 As we discussed possible options a misunderstanding of route suggestions led to Cappy exclaim, “There will be no asphalt riding on my watch.” B and I had good fun mocking this statement, not knowing how terribly ironic it would become. With full gusto we headed for the Left Lip. Railing grippy soil I tracked Newb’s line and watched with a shudder as he rode over the log ladder. With trepidation, I hit it, and found it rebuilt with steeper and more skew angles. At the bottom of a thrilling lip descent, B, Newb, and I stood waiting. Waiting. We rode back up a ways and finally encountered Bambi. Disaster struck. Xteric went crooked on the top of the log and landed on his shoulder. Snap. He and Cappy were walking out, then rolling MET back to the Lott. The rest of us quickly made our way around the lake and back to the Knott, Bambi pausing on his side for a moment to add a third (though minor) crash for the evening. 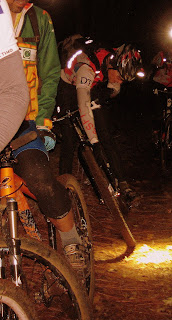 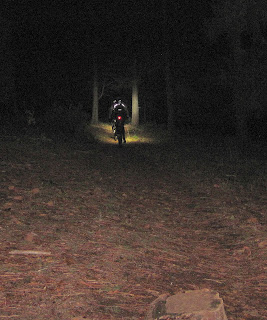 Both parties arrived back at the Lott at the same time, and we huddled around Xteric. He was feeling sheepish, getting injured on an easy move like some graceless novice. He refused offers to assist him out of his chamois, but stoically headed in for tacos, not forgetting to grab his offering: a bottle of Jamaican Pain. 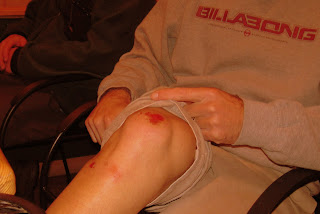 Mother Rye didn’t show a hint of pity for our wounded warrior. Too many cycling injuries had presented themselves at her bar and the novelty had worn out. Many (most?) of us have broken collar bones before, and empathized with his condition. When asked if he needed help preparing his tacos, he refused, saying,“I’d never let another man sauce my taco.” That lad is Taco Strong.

As the evening wound down, B drove with Xteric and was available for dropping him off with the team nurse or whatever else might be needed. 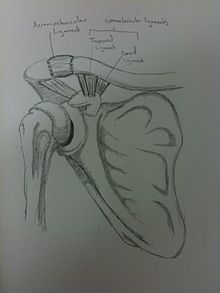 The late morning report is that Xteric didn't brake his collarbone, but separated his shoulder. 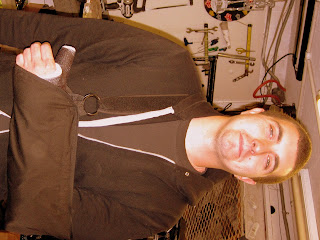 Just to round things out, according to eye-witness reports, during the late night post-ride escapades, B crashed into Hangtown Creek.