Solo Wandering in the Woods 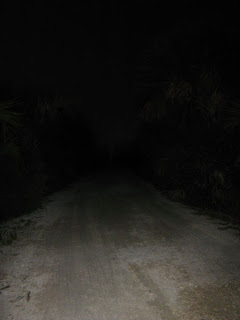 So I was good to my claim of .6 and headed out from the house a tad late in an effort to meet the rest of the crew. An earlier phone call with Cap'n gave me the route de jour and I was confident I could get the job done. I must say the rolling out of the driveway and within 10 minutes hitting dirt was a pretty special moment for me! Once on dirt, I dropped the Qualifier, headed around the lake loop, climbed the left lip (thought I saw lights but was wrong), got out to MET and then headed out Bonetti. It was at this point that I lost my way. Cap'n had stated that the route would be Flemming to Redneck to MET to Cappy's Cash and out Bonetti. Try as I might, in the dark and alone I just could not find the connection from Bonetti the super steep part of Cappy's Cash. I sat in for awhile to try and hear if anyone was coming, when it dawned on me; "I am all alone, at night, in the dark, way out here on Bonetti, and I have seen some interesting folks camping out this way before"! So, I started to ride again. I am not too proud to say I think I was moving pretty fast, actually I was flying and well aware of every snapped twig for a 10 mile radius, yeah, I am a bit of a scaredy pants (very different than P3). I climbed back up to the top of MET on trails and then dropped Rufus to the lake and headed for the Knot Hole...when a light caught the corner of my eye. Yes, there is was again! Off yonder way was the distinct flicker of four lights weaving in and out of sight! The Brotherhood had been found! My search was going to lead to a reuniting with FT3. I turned heal and headed back on the lake loop and in short time met up with B, Xteric, Councilman, and Cap'n. They had done the above listed loop and then headed done the Lip and home via the Lake loop...there was some yo-yoing on the horse trail and Palins prior to the Flemming attack. A swim was had by some, I declined as I was still wearing arm warmers...it was kinda cool!

Tacos were plump and greasy and the rye was smooth! Sauce selection was plentiful and I reek of garlic today!

I am in need of a 56 road bike for the weekend for pops to ride? Anyone have a willing offer. He has refound the fitness bug and recently did a long multi day Oregon Coast ride...I was hoping to send him up MET if I can find a bike.

Until we Ride
LOtB
Posted by LOtB at 9:36 AM