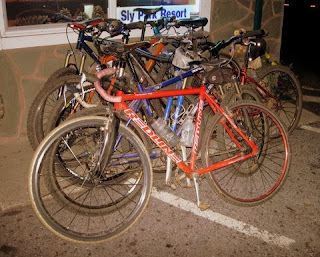 B forgot his lunch pail, but outside that of that, it was back to work for FT3. Rock God, No Car, NoHandle, B, Xteric, Bambi, I all headed out on a Classic State of Jefferson Winter Ri 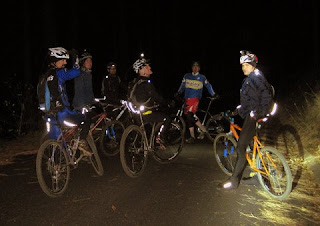 de. In actually was a Classic Californian ride, but I am amazed how ofter our conversations come back to the state of Jefferson vein. I feel we may have a major secession movement amongst the FT3 family. As for the ride, NoHandle had a last second route suggestion that fit just perfect. As I had been absent for some time, it was determined that having Barnes back in the group necessitated a trip up Barnes Back Mountain! We did a quick half loop of the lake and then started heading up hill. The trip up Barnes Back was marked with some big efforts. I admit I opened this can of worms by going up front and pushing the pace. However, fresh off his big victory, Rock God was having none of it. For the final third of the climb to the VW, Rock God/Manny was OTF and pushing hard. I think B and Xteric were with me up to the gate, but I was pretty foggy after trying to keep up with the guy who lies on his birth certificate and not really sure who was there. The second half of the climb saw Rock and Xteric off again and the rest of us enjoyed a more pleasurable climb and perfect night. We headed back down wedding march to rock garden 1a and then back to the lake loop to tacos.

Worth Note:
Rock God's pace up Barnes Back may have been due to the fact that he experience his first FT3 crash. It appears that he was unable to negotiate the curb that Lars easily cleared.

The vicious attacks on Rock God are only intended to keep the fire burning bright! Keep the fire in the belly my friend, got some more racing in front of you. I just hope we don't have to get over any curbs on Sunday!

Taco Report:
A greasy, heavy on the meat side, was the taco recipe de jour. B suffered from some brief amnesia and could not recall either his order or intention but did enjoy a good hot sauce sweat. Tacos were enjoyed inside as the night was cold. However, the rain did stay at bay until the drive home.

Final note: Word has it that there might be some new trails to hit up next week.