Rock God's Race Report:
I lined up with the 35/45 A's which went off in two waves. They call up the top 20 riders in each age group and started the 45'ers a minute back, so that meant I was near DFL from the start. The tight course made starting position crucial as things bottle necked up quickly in the tight sections. The legs proved to be a bit flat and while I made it past quite a few guys I did not have the snap in the legs of past fort night; walking through the city all afternoon Saturday (post bike ride to the Marin headlands) to improve the DTI did not help. When I settled in with my racing group I found them gapping me out of the corners and I reeled them in on the technical stuff. I think the roadies were out in force to contest the great course and District Championship race. Overall the course was awesome with the banner weather and large enthusiastic crowds made it the place to be for a two wheeled fanatic. The place to spectate was definitely 'the gulley', the entrance got chewed up quickly and worked over quite a few competitors, including Women's Elite winner and ' post race shower lady' Katarina Nash ( I'll never forget that picture :-) ). Overall it was a great outing and I'm happy with the results, I feel a top 10 would have been possible on a good day. I ended up 14th of 34 class entries and passed many in the 35+ class as well. It was encouraging not to get lapped by multi-national champ Don Myrah who flew off the front of the 35+ field and subsequently proceeded to finish top 10 in the elite mens field. I'm going to skip the USGP in Portland this week and do some local riding and possibly racing instead; it's pissing rain and overcast up here in Portland, enjoy another perfect conditions FT3. 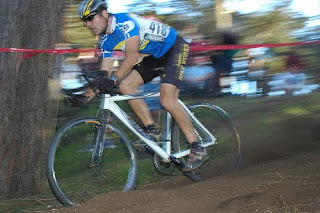 Rock, that's a solid finish as foray into the A category, you should indeed be proud.

After a long wet ride on Friday on the road from Auburn to Pville, I was extremely fatigued on Saturday and very concerned about the 5:30am departure necessary to tow the line with the 35+ B's, so I made the call to race Open B's to take some pressure off.

The line up in the Mens B category was intense as well, with twenty riders being called up and a scramble to the line, C-Man, Larz and I found ourselves about four rows back, although my positioning was more center-field than their outer edge positioning. I was able to make some progress in the initial start sprint, but traffic slowed things down. I made several passes through the first three laps then settled into an area where things were spead out a bit. That was a nice indicator that I was probably somewhere between the lead group and the chase group... the story of my life. I had a minor scuffle with another rider on a tight pass that I called (left side!), but he didn't let me go and proceeded to inform me that "this is a B race." Hmmm, B Race huh? I think he later jammed his chainring into my leg on a run up, could have been an accident, but I can't be sure. I agree with Rock, the roadies were out in force, talking their smack and handling their bikes poorly in technical sections, but powering through others. I think I ended up in the twenties, which is fine by me, I decided not to kill myself on this one as the Sac Series is my focus (electrolyte smoothies for my focus?). I noticed that I was passing several of the riders that were called up to the line, which was a good sign. I believe my SAC CX rival Joe Miller got a top five finish in the Open B category, so maybe if I pushed harder I could have had a better finish, but after all, as I was informed, it was a B race.

The overall trip was good, beautiful day in SF and I enjoyed the carpool with C-Man Larz and Stan. We had much discussion utilizing big words and touched on hot topics both political and disgusting. I think Larz, C-Man and Stan may be starting the FT3 book club soon, but not before advocating for a improved and progressive local community. 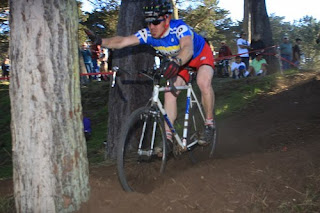 What else can I report, I went out there and hugged a tree. The race was hard. It was made even harder by a long long thanksgiving week of family and mayhem. Knowing that there was no way I was going to win the SF Men's B race, I thought I would make a stab at the Heisman. That tree thought it was set up to take me down, but I showed that old growth who was boss. Do you see the menace on that face! I know I am getting a ticket to NY for the final vote! No TD's, no real running yards to speak of, but I do have a handful of middle of the pack finishes in some B's races. Hopefully they don't hear about that girl that races with me.

This might be a thin turn out this week. Another blue collar ride for FT3. Sometimes it is the simple rotation of the wheels and pedal that reminds us that all is right in the world. For those of you who can, lets get out there and reminder ourselves about all that is right. Pedal on my friends.