Life's Too Short Not to Go Big, Gotta Go Big

B here with an edit. Immediately below are some pictures to add to Captain's Ride Report. Click on the images to expand them. I'm done trying to get them formatted nicely within this post, sorry for the lack of professionalism. I'll e-mail the full size map jpegs to all participants. If anyone else is interested in them, just let me know and I'll send you the large files. The ride was about 62 miles long, a touch more if you took Nocar up on his dinner offer (see tasty pot roast pictured below). The vertical was 9200' including 2K up from the Poho Bridge on Forebay to the ridge and over a full thousand out of the Mosquito hole (I stand corrected on that one). 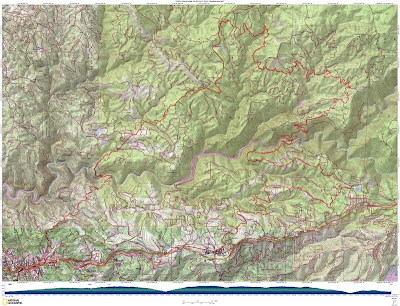 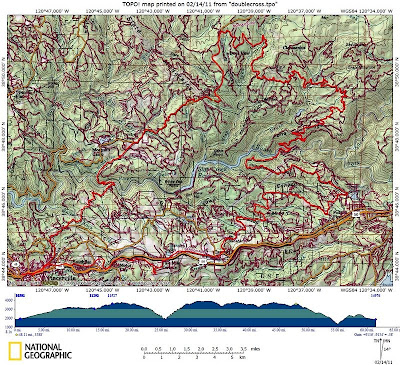 While the video accompanying this post may not exactly match the typical efforts of FT3, it certainly makes the statement of commitment to 'go big.' The best part of the Sunday's Double Cross Ride was the fact that a) No Car did it by himself with snow on the ground late last year (December), and b) that none of us knew where we were. I felt a bit like Dorothy at some point as I pondered "I don't think we're in El Dorado County anymore."

At mile 52, prior to the arrival in Mosquito I felt as though it was all a big dream, and that we were on Park Creek Road looking for the chopping block trail. Some real gems were ridden, especially the south facing climb out of the Forebay river canyon that has us all warming, shedding clothes and getting hungry. Once atop the summit and upon dirt, we enjoyed a long, long, long rolling stretch and encountered two recently rehab'd bridges that were carefully inspected by our resident engineer. At one bridge stop a particularly funny incident occurred when a motocrosser decked out in full fox gear asked us for directions. We were confident that his wife made him ask us for directions, and we noted that he felt uncomfortable doing so. We think he might have been a distant cousin of Paul. Definitely too cool for the likes us us 'random' cyclists who happened to be on 'road bikes' miles and miles from anywhere.

Speaking of Paul, we noted that he had obviously ridden the route earlier and enjoyed better jalapeno poppers, and burritos, and rode a better bike faster than us over the same route. No sign of Peter out there yesterday tho. Eventually, we arrived upon asphalt and the 'community' of Swansboro. The little pond and bright sun was fitting of picnic, so we had a little FT3 picnic. We knew there was some immense suffering to be endured on the climb out of Mosquito so a fuel up was in order.

The descent down was fun, and as usual, slightly treacherous, as we encountered our first cars of the day on this NoCar-lead ride. The Fort's rear wheel popped a spoke on the switchback section just before the bridge, marking our first mechanical of the day. Fortunately(?) the trip home was mostly uphill cause there were no brakes, not too mention a very wobbly wheel on the rear of the fort. At least one of the car drivers had something rude to say, which I personally have found to be 'normal' or 'expected' when riding mosquito road. Speaking for myself, I don't think I have ever been happier to summit that climb.
Posted by Cappy at 9:15 AM