What's your plan, B? 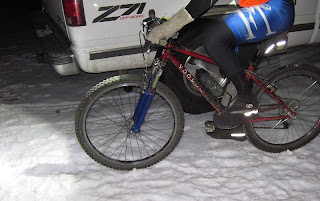 Snow waited in the Knot lot. So did Peter, in his idling Dodge Ram, with the heater on high. But, each of the stalwart FT3 riders needed only a can of hydration, and an extra layer of synthetic material to brace themselves for the clear, cold evening. (B also needed a bungee cord, as Rock God was not present with his bag of useful things.) Needing to warm up, and hoping for shallow snow B, Xteric, NoHandle, Cap'n and Nocar headed for The Qualifier. 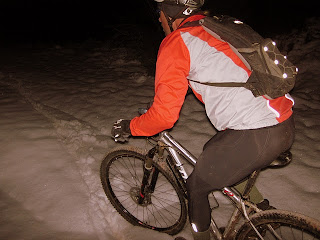 Ride leader was not declared, instead a power sharing agreement was reached between NoHandle and Cap'n and route disagreements were settled with taco wagers. Somewhere near the top of the Qualifier we turned to the lake. The snow masked familiar landmarks and a little squabbling and backtracking ensued. On the lake loop we encountered a set of bicycle tracks that had frozen into wheel grabbing ruts. Apparently Paul had ridden the Griminger loop earlier in the evening.
After a snack exchange where the pumpkin pop tart was named Xteric's favorite food ever, the group decided to avoid a short ride and tack on some more trails. Turning up the lip even those who ignored the Single Speed call out, and had been merrily spinning through the quad burning snow, were forced off their rides. 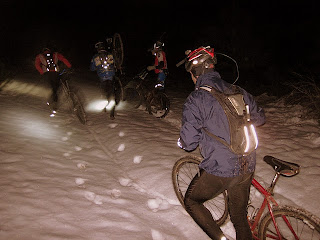 The reward for this exertion was a fast descent and first official Ft3 ride over the new super secret log ramp. The snow just isn't much of an obstacle going downhill. 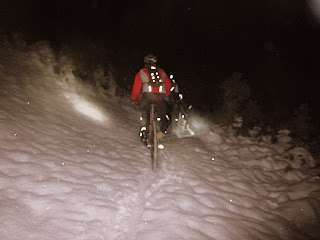 We raced around the remainder of the lake and, just past the second dam, caught the attention of a car full of FT3 spotters who stared in wonder as we picked up the last bit of trail to the Sly Park boat launch. Something of a fashion show developed in the Knot Lot. While Cap'n considered the relative coolness of dangling versus hidden bib straps, NoHandle debuted his (hand-me-down from Paul?) team issue Shimano jacket. 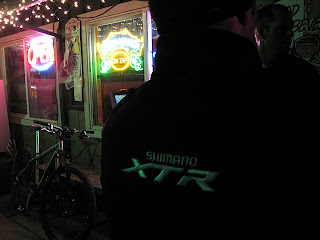 LOtB arrived in his alternate personality "Mr. Larz". After the taco session he presented Mother Rye with a bicyclist shaped frame that housed photos of great moments in FT3 history. 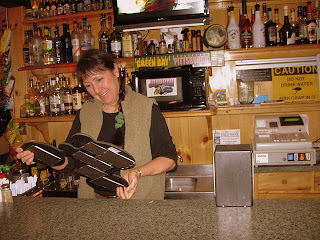