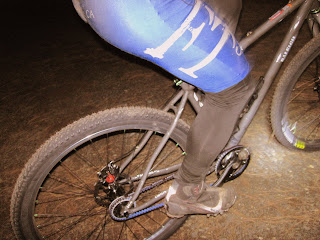 The sixth ride of two-ought-eleven was full of surprises.
Councilman's attendance is almost a surprise these days, but unremarkable compared to the sight of B on a clean new ride. You saw it here first, B and his fully rigid, belt drive, niner.
He rode it straight from The Spoke. And, since it had only been assembled a few hours prior, it needed a little attention. NoHandle gleefully inserted three tools at once to adjust the position of the asymmetrical bottom bracket. 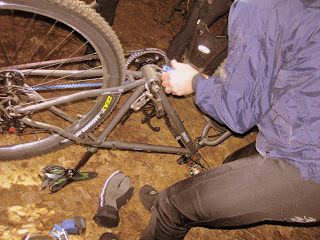 While some wrenched, others hydrated. 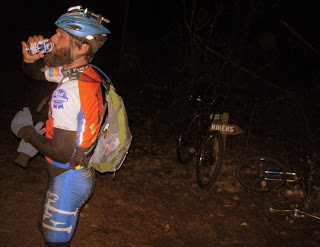 Xteric assumed the role of ride leader. He carefully assumed the mantle of power by declaring, "If I'm ride leader then we're going the wrong way."
He brought innovation to the task and dished out the following route, description courtesy of NoHandle.

Headed out the first section of the qualifier until it drops back down to the camping road. From there

Once back on pavement he took up as if we were to climb Barnes Back, but then at the last minute dropped down to the bridge on the lake loop.

We took the lake loop a short distance counter clockwise to the horse trail.

Horse trail around the lake (O! the traction!) and popped out at the upper parking lot. Climbed the dirt road to the horse camp “Fee Area” crossed MET and dropped the Flemming fire road to get the upper half of the Flemming decent towards Palin’s Plunge.

After the plunge, we climbed out and took a left towards the spillway and did a final climb up the spillway switchbacks to the road and then to a very special party.

A few words about trail conditions. To answer Safety First's question: no snow remained on any of the trails that we rode. What we found instead was tread-holding, fast-rolling soil. Every rider experienced epiphanies on the steep climbs as legs gave way before traction.

Downed trees were strewn across the horse trail. Obviously, the equestrians won't get off their high horses, leaving the dirty work to civic minded FT3 riders. 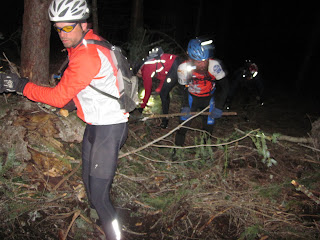 The "very special party" mentioned by NoHandle was the next big surprise of the evening. A birthday party was being held at the KnotHole and they had prepared a table full of delectables that they couldn't finish eating. For once, tacos weren't the only thing on the menu. So, besides Councilman's offering of a new and special sauce, we had homemade guacamole, salsa, jalapenos and sour cream to add to our tacos, and , the star of the show, ChickenBake. We were compelled to finish the whole pan of this creamy, spicy chicken dip. 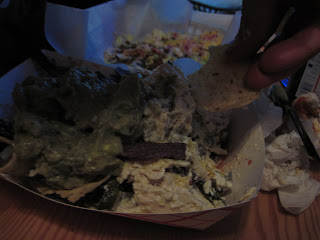 So, B, How did your new bike handle the trails last night? 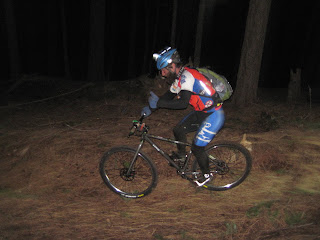