The Crush of Fatigue

I have a brief posting as part of my excuse for not riding last night, keep reading for a ride report via Cap'n and kudos for keeping the fire buring, spot on!

I fear I have fallen off my wave! With work stress, a new baby, and general family chaos I have hit the largest brick wall imaginable. I am done, flat out done. The thought of a ride or run or anything physical is enough to drive me insane right now. We have about a five week break until the cross season picks up again which is plenty of time to reset the engine and get back on the horse. For now a little down time might be exactly what the body is needing. It kind of sounds like the entire group is feeling the same tug of exhaustion, as evident by the report that follows. Although I am experiencing pangs of guilt for not showing last night, I also have experienced some immediate resurgence for simply naming my exhaustion. I have done a little exploring into the periodization approach to training. When cross examined with the general FT3 race and training schedule, it seems that only one period exisits...that of 100% full tilt boogie! I don't know about the rest of you, but I am going to happily enjoy the rest of this week with the family and not think about exercise. Come Sunday, time to look at another building period to a string of CX races in November.

Racing notes I missed: I completely forgot to mention the showing by Ghost and VD at the Knickerbocker 8hrs/50miler. VD showed big improvements, finishing the Knickerbocker race well ahead of his Sierra 50 time. We will have to do a full analysis of the Garmin data to quantify his actual improvement. Ghost finished fourth in the 8hr, just off the podium but chasing hard to the end. 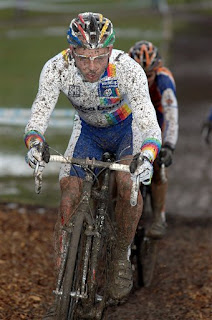 Here is to enjoying the down time!
Until we ride,
LOtB

Wind in the Sails

The first winter ride of the 2009/10 year was noteworthy on several accounts. I arrived at the parking lot to find that riders were bowing out via text message as rapidly as the leaves were falling off the trees in the wind. As I sat alone watching the texts come in, I actually had to ponder what I would do if no riders actually showed up. Would the FT3 flag not fly on the first winter ride of the season? Alas, B showed up and we loaded up the Previa for yet another FT3 outing.

The ride prep took a bit longer than usual as we had to don our foul weather cycling attire. We rolled out along the parking lot fence, or “The Hiccup Trail,” I on the Trek 820 single speed with ghetto chain tensioner and B on the CX single. Booker was rocking his puppy oats rapidly behind. We came down the technical drop that named that trail section, crossed Sly Park Rd and took a new and different route into an equestrian compound. While exploring, I we came across a homestead that featured a rural but homemade snowboard rail. Seems even though the majority of the FT3 riders aren’t ready for winter, the local Sly Park boarders are. During the exploratory time period, it was noted by B that explorations don’t always end in glory, or something like that. A few turns off route toward the compound and we decided to try a new singletrack trail descent which turned out to be of epic proportions. Long, steep and technical is how you characterize this decent. Our explorations found the glory and this trail section will be visited again. We made our way back to MI Trail and rode the Fleming loop counterclockwise. Trail conditions were smooshy and it was wet, wet, wet. We did more walking than usual and the pace was slow, and Booker was solid all night. We opted out of the backside of Fleming and took the squishy Fireroad back to the parking lot. Rode MI Trail road to the first dam, then rode along the lake to the boat dock and back up. Oddly the automatic gate rose for me when I rode up to it, B was not so lucky. Weird.

The Knott was quiet, with only about 3 or 4 Knottheads on site. We opted to eat at the bar and were met with utter disappointment by one of the main taco bitches. She was clearly very shocked and disappointed that so many FT3 riders were made of sugar last night. Having set the bar high with the snow rides, it will take some work over the winter to bring the respect back to that level. We had to run down all the excuses for her and she passed judgement on them. B and I are sure that if NoHandle were in town he would have been there. Beyond that we collectively decided with the taco bitch that Larz, Bambi and NoCar had pretty good excuses as well. Those who didn’t chime in at all took the high road (Councilman), but Ghost and VD weren’t so lucky or wise. At some point B’s beer chugging prowess came up in conversation, and interestingly enough, one of the Knottheads at the end of the bar was the roommate of the disappointed chug contest loser. There was an older Knotthead of few words in the middle of the bar who said “It’s very seldom that you run across a hero like that,” referring to B’s chugging prowess. True, so true. A roll by of the pino loge’ resulted in a short pit stop for observation of the intriguing and entertaining local crowd.
Posted by LOtB at 9:30 AM