I have been staring at a blank blog screen for about the last little while. I am not really sure what to post for today.

The clear topics are:

RG flying off the front of the Snelling race to take his first win of the season. Seeing how he has been going lately I have a feeling that this will be the first of many...Keep up the good work RG and fly the FT3 colors proudly, albeit underneath your road team kit.

Took out the 9er for a initial outing on Sunday with Cap'n and NoHandle. Great bike...the revolution cont 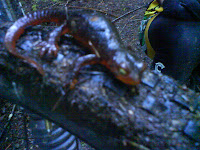 inues (no pun intended). We did encounter some serious wildlife and we serenaded with the distant sound of gunfire! Don't eat this guy. According to web research done by our own Cap'n, PhD in Mt. Bike Lifestyle, using the Sierra Newt as BBQ filler would be a bad idea...The Newt Kabob would result in potential death...The next episode of Man vs. Wild will be in Pollock Pines and feature a Newt attack!

Outside of those topics, I am in a fog. We have been hammered by some serious illnesses in the house and the lack of quality rest is catching up with me. As for tonight, I have no idea on my participation. Sunday was a great outing, but may have been my hall pass for the week.